Posted on February 7th, 2020 by pajamapress

Pajama Press is proud to announce that two of our books have been selected by the United States Board on Books for Young People (USBBY) for their 2020 Outstanding International Books List, including: Girl of the Southern Sea, written by Michelle Kadarusman, and The Girl Who Rode a Shark: And Other Stories of Daring Women, written by Ailsa Ross and illustrated by Amy Blackwell.

Michelle Kadarusman was in attendance at the 2020 presentation, held at the ALA Midwinter Conference in Philadelphia. Committee member Amy McClure spoke about how the protagonist Nia from Girl of the Southern Sea embodied resilience during challenging times.

The USBBY is “a nonprofit organization devoted to building bridges of international understanding through children’s and young adult books.” The Outstanding International Books List began in 2006 and aims to honor international books that are published and distributed in the United States and deemed the most outstanding of those published during the calendar year. Learn more at www.usbby.org/outstanding-international-books-list.

Pajama Press extends our congratulations to our talented creators. Our sincerest thanks go to the USBBY for their support of international books through this incredible program for young readers.

Posted on September 8th, 2016 by pajamapress

Pajama Press is thrilled to announce that three of our titles have been nominated for the 2016 Canadian Children’s Book Centre Awards.

A Year of Borrowed Men, written by Michelle Barker and illustrated by Renné Benoit, has been nominated for the TD Canadian Children’s Literature Award.

The picture book, which is written from the WWII memories of Michelle’s mother Gerda, celebrates the ability for humanity to win out over hostility during a dark time in world history. Gerda’s father has been conscripted into the German army, and the “borrowed men” sent to work the family’s farm in his place are prisoners of war forced to labour in their enemy’s homeland. Still, the seven-year-old girl finds small ways to defy authority and build a forbidden friendship. This book has also been nominated for the 2017 Chocolate Lily Book Award.

In a Cloud of Dust, written by Alma Fullerton and illustrated by Brian Deines, has been nominated for the Marilyn Baillie Picture Book Award.

In this picture book set in Tanzania, a young girl named Anna is determined to get an education in spite of the long walk that leaves her no daylight in which to do homework at the end of the day. Working through the lunch hour instead, she misses a visit from the bicycle library. Luckily, her compassionate classmates find a solution that lets everyone get home faster than ever before. In a Cloud of Dust has previously won the Rainforest of Reading Award, been nominated for the Forest of Reading Blue Spruce Award, and been a Foreword Reviews Best Children’s Books of Fall 2015 selection.

Uncertain Soldier by Karen Bass has been nominated for the Geoffrey Bilson Award for Historical Fiction for Young People.

Uncertain Soldier is a suspenseful YA novel about a WWII prisoner of war struggling with conflicting loyalties. All his life Erich has learned that keeping his head down is the best way to avoid trouble. But when his silence could cost a friend dearly, it may be time to stand up at last. Uncertain Soldier has previously been nominated for the IODE Violet Downey Book Award and the Forest or Reading Red Maple Award. In 2014, author Karen Bass won the Geoffrey Bilson Award for Historical Fiction for her novel Graffiti Knight.

“The nominated books exemplify some of the very best work by Canadian authors and illustrators across the country. The winners of the English-language awards will be announced at an invitation-only gala event at The Carlu in Toronto on November 17, 2016. The winners of the Prix TD de littérature canadienne pour l’enfance et la jeunesse will be announced at an invitation-only gala at Le Winsor in Montreal on November 1, 2016. Overall, $135,000 in prize monies will be awarded.

This year, TD and the Canadian Children’s Book Centre are once again partnering with CBC/Radio-Canada to present the Fan Choice Award/Choix du public littérature jeunesse. Young readers are invited to choose their favourite book from the titles shortlsited for the TD Canadian Children’s Literature Award and the Prix TD de littérature canadienne pour l’enfance et la jeunesse. The awards will be presented to the winning authors at the Toronto and Montreal galas.”

Click here to read the full press release and the lists of nominees.

Pajama Press is proud to announce that two of our recent titles have been shortlisted for the 2017 Chocolate Lily Book Award. Bad Pirate, written by Kari-Lynn Winters and illustrated by Dean Griffiths, and A Year of Borrowed Men, written by Michelle Barker and illustrated by Renné Benoit, have both been nominated under the Picture Books category.

The Chocolate Lily Book Award is a young readers’ choice program that encourages grade school students to read and enjoy some of the best fiction by British Columbia’s authors and illustrators. The program is intended to spark a love of reading in the reluctant reader and enrich the strong reader’s passion for books.

We are pleased to extend our heartfelt congratulations to our nominated B.C. creators, Dean Griffiths and Michelle Barker.

We are thrilled to announce that six recent Pajama Press titles have been selected and featured in the Spring 2016 edition of Best Books for Kids & Teens:

Elephant Journey: The True Story of Three Zoo Elephants and their Rescue from Captivity
978-1-927485-77-4  Hardcover with dust jacket
Written by Rob Laidlaw
Illustrated by Brian Deines

A Year of Borrowed Men
978-1-927485-83-5  Hardcover with dust jacket.
Written by Michelle BarkerIllustrated by Renné Benoit 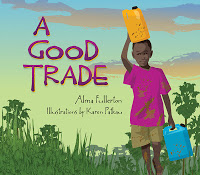 Pajama Press is proud to announce that A Good Trade by Alma Fullerton and Karen Patkau has been nominated for the 2015 Kentucky Bluegrass Awards.

A student  choice award program, the Kentucky Bluegrass Awards are open to all public and private schools as well as public libraries in the state of Kentucky. The program has been encouraging young people to read quality literature for 32 years. Learn more at kba.nku.edu.

A Good Trade, which highlights a day in the life of a young boy in rural Uganda, is also nominated for the 2014 OLA Forest of Reading Blue Spruce Award.

Congratulations to both Alma and Karen. We’re thrilled that so many students will be reading A Good Trade.

Pajama Press Nominated for Small Press Publisher of the Year

The Retail Council of Canada has announced its longlists for the 2014 Libris Awards celebrating excellence in the Canadian book industry. We are honoured that our country’s bookselling community has nominated Pajama Press in the category of Small Press Publisher of the Year.

The Libris Awards honour outstanding contributions in a range of categories. The shortlists in each category will be decided in April, with the final winners announced at the Libris Awards Gala on June 2nd.

We are so proud to see our company name alongside so many outstanding presses, authors, booksellers, sales representatives, and our own distributor, University of Toronto Press.

Click here to view the longlists in each category.

The OLA Forest of Reading 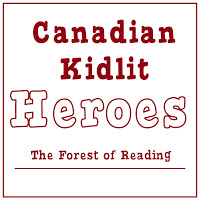 With the Ontario Library Association Super Conference fast approaching, it seems appropriate to acknowledge another OLA program that is engaging children across the province right now: the OLA Forest of Reading.

Every October the Forest of Reading committees, which are made up of public and school library practitioners, select shortlists of nominated titles for the following categories:

The Evergreen Award—adults of all ages

In the months between the announcement of the nominees and the awards ceremony in June*, participants read or are read books from the shortlists in their age category and vote for their favourite. The awards are presented at the Festival of Trees in Toronto, where hundreds of eager school children meet and cheer on their favourite authors.

With more than 250,000 readers participating each year through their school or public library, the Forest of Reading is the largest program of its kind in Canada. To learn more, visit the Ontario Library Association website.

Not a resident of Ontario? Many other provinces and regions in Canada have readers’ choice awards. We have already featured the Manitoba Young Readers’ Choice Award and British Columbia’s Chocolate Lily Book Award. We look forward to featuring more!

*The Evergreen Award and the Golden Oak Award are presented at different times.