Going for a Sea Bath “rich with vocabulary, numbers, humour and art”—CM Magazine

Posted on February 23rd, 2016 by pajamapress 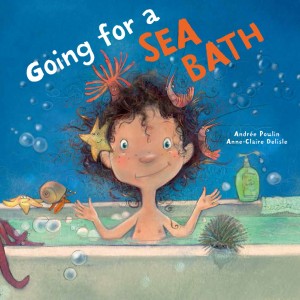 “Repetition and humour make Going For a Sea Bath a wonderful read for children who are young enough to enjoy playing in the bathtub. They will enjoy counting and adding all the sea creatures. Poulin uses a combination of familiar animals, like turtles and clown fish, along with lesser known ones, such as sea urchins, anemones and eels. The illustrations are realistic yet humorous and show Leanne swimming around with her new bath mates. Each page offers an opportunity to spot the creatures from previous pages as well as count the new ones being added. Large full-page illustrations by artist Anne-Claire Delisle give readers lots to look at and add to the humour of the story. The sea turtle, who was the first one to join the fun, is the largest and funniest of all the creatures and can be spotted in many funny poses throughout the story.

—Claire Perrin is an elementary teacher in Toronto, ON.

Posted on February 17th, 2016 by pajamapress

Ben and his friend Peter watch as movers load their truck with box after box, followed by Peter’s red bicycle. Ben finds it hard to say goodbye. Once Peter is gone, he decides to move under the table and become a caveboy, eating with his fingers and drawing on the cave wall with a pointed stick. After completing a complex narrative picture featuring two boys, Ben leaves the cave and rejoins his family. Looking out the window later, he sees a new truck, with movers unloading boxes, followed by a child-sized, neon-blue scooter. Ellis hits all the right notes in this sensitive text. Ben may not be able to talk through his downcast emotional state (particularly since Caveboy Ben says only, “guh”), but with his supportive family in the background, he works things out on his own. Le Fave’s strong, expressive line drawings make the characters’ emotions easy to read. He illustrates Ben’s cave period in earthy tones, contrasting with other, more colorful scenes. A satisfying picture book and a welcome sequel to Ben over Night (2005)—Booklist

Posted on February 17th, 2016 by pajamapress

Elliot– a young rabbit with a tendency to cry, yell, and misbehave– moves between several homes in this story of adoption, foster care, and finding a “forever family.” Debut author Pearson never blames Elliot for his behavior (it’s unclear if he’s meant to have a developmental disorder), instead focusing on his parents’ inability to understand their son. After Elliot’s parents seek help, he is sent to live temporarily with an unfamiliar but loving family. Elliot later returns to his parents, but this proves short-lived; following a stint with a second foster family, Elliot is told that his parents could never take care of him, because they did not know how. A muted palette of gray, blue, and manila reflects the somber, uncertain mood, and Gauthier’s (“Magic Little Words”) naif-styled rabbits resemble cutout paper dolls dropped into the scenes, suggestive of the way Elliot is shuttled around. Elliot eventually finds a family that understands him, and while the book’s somewhat oblique language may require supplemental explanation from adult readers, Pearson’s refusal to sugarcoat his journey should resonate with children in similar situations.—Publishers Weekly

Posted on February 8th, 2016 by pajamapress

“Leanne does not have the standard tub toys. She bathes with real turtles, eels, clown fish, and sea horses. Her dad delivers them to her footed bathtub after she complains about her boring bath-time. Each time he runs to the beach behind their house, he returns with a successive number of animals. The tub becomes too full when 10 octopuses are dropped in, so the dad and the daughter have a sea bath outside in the ocean. The humor in this story is reminiscent of Robert Munsch’s writing. It’s over-the-top but heartfelt, and the bright cartoon art is a hoot. Seeing all of the creatures of different sizes, textures, and colors in the tub is anything but boring. VERDICT A fun addition for those looking for new bathtime or numbers books.”
—Tanya Boudreau, Cold Lake Public Library, AB, Canada

Posted on February 8th, 2016 by pajamapress

“Alberta-based Geoffrey Bilson Award-winning author Karen Bass draws on the Cree legend of the Wîhtiko for her latest YA novel, which blends adventure, horror, and some good old-fashioned coming-of-age wisdom.

En route to spend the summer with his mining-executive father in Yellowknife, 15-year-old Jared Fredrickson’s private jet crashes in a remote swamp in Northern Alberta. He regains consciousness as a rescuer enters the scene—Kyle Badger, a Cree teen (also 15) who happened to be nearby and saw the plane go down. After bandaging the unconscious pilot’s bleeding head (there are no other passengers or crew), Kyle helps Jared out of the wreckage, and the latter convinces the former to climb a nearby hill in the hopes of getting some cellphone reception and calling for help. Kyle is more than reluctant. His Kokum (grandmother) has always warned him to stay away from the hill, which is said to be cursed. But Jared is insistent, and the two boys set off on a quest that will lead them straight into the path of mortal danger.

Jared and Kyle could not be more different. Raised in Edmonton by extremely wealthy parents (now divorced), Jared wants for nothing. He is small in stature and obsessed with material goods; he worries more about his damaged laptop than the injured pilot. He also has zero survival skills. Kyle, on the other hand, is the size of a large adult man, shares a small home with his grandparents and younger brother, and is obviously comfortable in the wilderness.

It quickly becomes clear that Jared doesn’t stand a chance of surviving without Kyle’s help, though the two don’t exactly hit it off. Kyle sees Jared as a spoiled, oblivious white kid, while Jared considers Kyle an overbearing bully who uses his size as an intimidation tool. The racial tension runs high, with Jared making ignorant—though not necessarily ill-intentioned—comments about aboriginals and Kyle referring to Jared as Moniyaw. “[It] isn’t an insult. It just means white man,” says Kyle when Jared’s temper flares at the perceived slight. “And if I called you ‘brown man,’ you’d flatten me,” responds Jared.

The dynamic between the boys is the best part of the narrative, and will open many readers’ eyes to the issues of race, class, and privilege. Neither Kyle nor Jared are bad kids, but they both have faults, and their process of figuring those out and coming to terms with them comprises the bulk of the story not dealing with their bigger problem: the Wîhtiko.

Bass does an excellent job of bringing together the elements of her novel, successfully weaving the supernatural thread into what would be a challenging situation for the boys even without it. Their climb up the hill releases the Wîhtiko from its lair and traps them in a parallel dimension where monsters and figures from legend are real, and the boys’ world—including the crashed plane and Kyle’s family—is rendered inaccessible by a strange fog that allows them to see, but not cross over.

The mismatched pair learns to rely on each other as they scramble through the wilderness for days, trying to outrun an advancing forest fire as well as the monster that threatens to eviscerate them. The description of the beast as a “vaguely human, skeletal creature” with a gaping-hole mouth, pieces of lip flapping against its bony chin, and bloody stubs for fingers is certainly nightmarish, but Kyle and Jared’s encounters with the creature aren’t overly scary for the reader. Jared’s terror is convincingly portrayed, however…”