The Ontario Library Association Super Conference 2015 is fast approaching. Held on January 28-31 at the Metro Toronto Convention Centre, Super Conference is the place to be for all the latest buzz in libraries and literature.

Pajama Press will be exhibiting in the Ontario Book Publishers Organization booth, #220-222. We look forward to book signings by the following authors on Friday, January 30:

We hope to see you there!

A Sad Goodbye to Ted Harrison

Ted Harrison, Canada’s most iconic painter of the Yukon, passed away in Victoria, British Columbia, on Friday, January 16, after a long illness.

The artist, who was 88 years old, is known for his highly imaginative and vibrantly coloured interpretations of the arctic landscape. He was also the beloved author and/or illustrator of many children’s books, including A Northern Alphabet and Robert Service’s The Cremation of Sam McGee and The Shooting of Dan McGrew.

Born in County Durham, England, Harrison dreamed about the arctic as a child reading the works of Robert Service and Jack London. In 1968, after years of travelling the world, he realized his dream and settled with his family in the Yukon. Challenged and inspired by the landscape there, he shed the techniques of his formal art training in order to capture the wild wonder of the north.

While audiences were at first taken aback by Harrison’s bright colours and stylized images, he has since become one of our country’s most beloved artists. In 1987 he was awarded Canada’s highest civilian honour, The Order of Canada. In 2004, he was made a member of the Royal Canadian Academy of Arts and presented with the Order of British Columbia in 2008. In 1993, Harrison and his wife moved to Victoria, where he continued to paint. He also taught art workshops in classrooms across the country, dedicating himself to the causes of art and education.

“Art must be part of every child’s education,” he said. “Painting is the last great freedom. You can paint what you like.”

Pajama Press was privileged in 2014 to publish the picture book biography A Brush Full of Colour: The World of Ted Harrison. This project gave us the opportunity to work with two authors with personal connections to Ted Harrison: Margriet Ruurs, who was his neighbour for many years, and biographer Katherine Gibson, who spent four years interviewing him for her groundbreaking adult book Painting Paradise.

We are richer as a country for the legacy of Ted Harrison. He will be sorely missed.

Posted in A Brush Full of Colour | Tagged ted-harrison 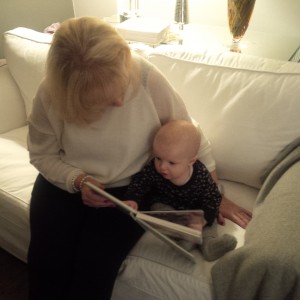 Our new Spring list has grown to six titles for the first time in four years! To me this feels like a milestone, after working for so many years to build up our publishing program. Our editorial team is extraordinary; our design and production are top notch; and our marketing and publicity are incredibly effective for a small press. Pajama Press has much to celebrate in our fourth year in business—and it is all about our authors, our illustrators, and the books.

Last Fall Pajama Press was just bustling with activity. With far too many events to mention in this brief letter, I will highlight some of the bright spots. On November 6th, at the TD Canadian Children’s Literature Awards, Karen Bass won the Geoffrey Bilson Award for Historical Fiction for Graffiti Knight. We were so proud and happy for Karen, who won this prestigious award at the children’s publishing event of the year.

Bear on the Homefront was launched at the McMichael Canadian Art Collection on November 9th, just in time for Remembrance Day. Stephanie Innes, Harry Endrulat, and Brian Deines did a great presentation and signed books for an eager crowd. At the inaugural INSPIRE! Toronto International Book Fair, many of our authors participated the whole weekend long. In attendance were: Sylvia McNicoll, Marsha Skrypuch, Karen Bass, Margriet Ruurs, Rob Laidlaw, Stephanie McLellan, and Deborah Ellis. Everyone had a great time schmoozing with their colleagues and visiting with the public.

Margriet Ruurs and Katherine Gibson promoted A Brush Full of Colour right across the country, including a major family event with the Toronto Public Library, the Victoria Children’s Literature Round Table, INSPIRE!, and many bookstore events and signings.

And, happily, my new granddaughter Alice (above) loved the Pajama Press books she received for Christmas!

“Using crisp text and exquisite paintings award winning author and illustrator Celia Godkin tells the story of a pair of peregrine falcons. The book begins with a description of the habits of the birds in springtime.

“Together, they swoop and tumble in a dazzling courtship dance.” As the story progresses, Celia seamlessly introduces the concepts of conservation in response to the long term effects of global usage of DDT. Celia describes how the first clutch of eggs was taken from the birds to be raised in a bird sanctuary.

Without bogging down the story, Celia provides justification and explanations of actions taken. In regards to the removal of the eggs Celia notes that “ The falcon rescue teams know that peregrines often lay a second clutch if the first is destroyed.” The pair of falcons do indeed lay more eggs and raise one chick that year. The book follows the development of the human raised chicks. Celia explains that due to the usage of DDT the peregrine falcon “…had disappeared from great tracts of its former territory” and shows that even high rise buildings in cities have been used successfully to reintroduce the peregrine falcon.

The two page paintings illustrate the wide scope of a peregrine’s world. The paintings evoke a sense of the peregrine’s speed in flight. This book is highly recommended for both school and public libraries. It can be used for story time as well as lesson units about nature, birds, conservation and the environment.”

“This is a must have.” Resource Links reviews A Brush Full of Colour: The World of Ted Harrison

“If you have a Ted Harrison book, this is a must have. A Brush Full of Colour tells the story of Ted Harrison from his birth in 1926 England and follows his development as an artist to the present day, living in Victoria. The book is full of Harrison’s paintings, including his earlier work before he developed his recognizable style. The text is easy to read, comprehensive, and interesting.

The text is divided into chapters: Childhood, Travelling the World, Life in the North, and A Full Time Artist. Each page is filled with colourful reproductions of his paintings, photographs, memorabilia, and artist sketches. Readers will be amazed to discover the influences in his work and the growth in his style. Harrison wrote the preface and several of his quotes are interspersed throughout the text. As a result, the reader gets a good understanding of who Ted Harrison is. The authors include questions below most of the reproductions to further guide the conversation. (“What do the ravens tell us about the weather that day?”)

A foreword by Ted Harrison, Table of Contents, and Index are included in this beautifully presented book. [It also includes] Acknowledgements, Sources and Resources.

Highly recommended for all Canadian libraries.”

“Pistachio is overjoyed when a golden crown arrives by mail, along with an unsigned card that reads, “Happy birthday, my little princess!” She decides that her real parents are a king and queen who will be coming for her soon. Suddenly it seems less important to obey her “adoptive” parents or be kind to her little sister, Penny. Her snooty pretensions make her a laughingstock at school. But when Penny gets lost one night, Pistachio summons her courage (“a real princess is brave”) to venture out alone and find her sister. Gay, best known for the Stella picture-book series, switches gears to write for a somewhat older audience. This early chapter book may be shorter than most, but it vividly portrays the characters’ emotions in both the text and the many colorful ink-and-wash illustrations. Sometimes charming and sometimes funny, the story is as satisfying as its protagonist’s name: Pistachio Shoelace. The last page reveals the cover of Princess Pistachio and the Pest, the second book in Gay’s new series.”