Posted on December 29th, 2016 by pajamapress

“…Adrift at Sea tells this difficult tale with a direct honesty that creates an opportunity for accompanied discussion, especially for some younger readers. Skrypuch maintains a strong sense of hope throughout, demonstrating the true strength of young Tuan. It is also a powerful story for all readers in light of the Syrian refugee crisis, providing an accessible way to build empathy toward newcomers to Canada.

The illustrations by Brian Deines are detailed, giving the story a canvas-like texture, and they add depth and richness to the imagery created by the words. This balances with the black-and-white photographs included of Tuan. The final pages of the book give the historical context, which may help it to reach an even broader audience of readers interested in the historical significance and the real-life outcome of the story.”
—Ashley Pamenter

Canadian Children’s BookNews says All the World a Poem “will fill [young readers] with the understanding that magic exists.”

Posted on December 29th, 2016 by pajamapress

“…All the World a Poem is a poetic picture book that immerses the reader in a world or words and wonder….From the moment this book is opened and a kaleidoscope of butterflies greets you, you are immediately transported­ – almost as if on the wings of said butterflies….

For young readers, hearing the words of All the World a Poem will fill them with the understanding that magic exists. This is grounded in the natural environment that Gilles Tibo and Manon Gauthier draw from the text. This beautiful book is best read together, leaving all enchanted by the depth and simplicity it creates. Even the presentation of the words on the page in relation to the illustrations gives the reader a new or re-imagined understanding of the fluidity of poetry.”
—Ashley Pamenter

“Malini, a young Sri Lankan girl, is tasked with protecting a bullock cart carrying a load of rice seedlings that will feed her entire village for a year. Malini is eager to accept this responsibility, but when it starts to pour rain, she must make a difficult decision: protect the rice crops or save herself.

This moving story of courage from award-winning author Alma Fullerton is told in lyrical free-verse and the sounds of the impending storm and Malini’s narrow escape with the rice cart come alive through onomatopoeic description. Kim La Fave’s dream-like illustrations imbue Sri Lankan life with a sense of magic, bringing Malini’s seemingly impossible heroic task within the realm of possibility. An explanation of the harsh realities faced by many Sri Lankan citizens at the story’s end highlights that life in Sri Lanka is often far from magical.

When the Rain Comes could serve as a useful point of comparison in many social studies classes, prompting students to weigh Malini’s responsibilities to herself, her family, and her village against their own. An inspiring story beautifully told, When the Rain Comes would be an enriching addition to most school library collections.”
—Natalie Colaiacovo

“In this follow-up to 2015’s Timo’s Garden, Allenby again recounts a heartwarming story of friendship…

The story reads like an encyclopaedia of friendship with each good act from a friend provoking another. The warm, detailed illustrations evoke a comfortable small-town charm, sure to entice readers to visit Toadstool Corners again and again. The book also does a nice job of highlighting everyday texts within the narrative, including lists, invitations, and newspaper articles, which could prompt discussion about the importance of reading and writing in daily life. A simple apple recipe at the end of the book should inspire many readers to host apple festivals of their own.

Depicting acts of courage, selflessness, and kindness, Timo’s Party is wholly designed to support its readers’ character development. While certainly not flashy, this latest iteration of Timo and friends offers another gentle and useful tale about the power of friendship.

How Do You Feel? is “[a] charming, smart, and attractive book” says Kirkus Reviews 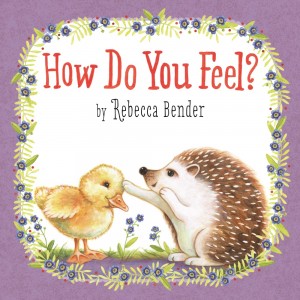 “A hedgehog sets out to ask how its fellow animals feel; along the way, readers will learn there is more than one meaning to the word ‘feel.’ A puffy, cheery cover framed in soft purple opens onto endpapers depicting a fresh green meadow in early summer. The tone is set for this toddler-friendly book that introduces a few animals and how they feel. On clean, uncluttered, sturdy pages with plenty of white, and using children’s acrylics and colored pencil, Bender depicts in a realistic style—though slightly anthropomorphized—a hedgehog, a toad, a snake, a duckling, a rabbit, a snail, and a kitten. The hedgehog asks the same question of each animal it encounters: ‘Toad [or Snake, Duckling, etc.], how do you feel?’ It is in the animals’ vocabulary-rich answers that this book really shines.…At the end, when all the animals ask hedgehog how it feels, readers will have a little surprise, as its answer is not one of the tactile kind: Hedgehog feels happy! A charming, smart, and attractive book. (Picture book. 2-4)”

“Sami was feeding his pigeons when his home and his neighborhood were suddenly gone. Sami and his family, Muslims, escape, along with everyone he knows. He’s frightened by smoke and noise, and his father squeezes his hand and assures him his beautiful birds have escaped, too. Days of walking get them to a refugee camp and safety, but while the other kids play and adults try to create a sense of normalcy, Sami cannot join in. Days pass, then he sees four different birds, which land on his outstretched arms. He collects some seeds to feed them, along with paper and wool for their nests, and for the first time since leaving Syria, Sami finds some peace. He then has the strength to welcome a frightened little girl who arrives with a new group. Del Rizzo uses her considerable talent with paint, Plasticine, and polymer clay to create the colorful, highly textured illustrations for this book, which she conceived while searching for a way to explain the Syrian civil war to her young children. Based on a real refugee child who keeps birds, this story isn’t about war but its effect on those who experience it and survive. This story of one frightened little boy who finds strength in caring for animals and uses that strength to comfort other kids is an excellent means of explaining a difficult subject to young children. (author’s note) (Picture book. 4-10)”

A STARRED REVIEW for My Beautiful Birds from Quill & Quire

“With the arrival of Syrian refugee families in many Canadian communities, parents and children alike are charged with trying to understand the harsh experiences these new classmates and neighbours have undergone. The compassionate and beautiful new picture book from Oakville, Ontario, illustrator Suzanne Del Rizzo – the first for which she has created both pictures and text – imagines a Syrian child and his family driven by war into a refugee camp.

While the others settle into the new realities of life in the camp, sensitive Sami is unable to recover, expressing his trauma through grief for the pet pigeons he had to leave behind. He tries to paint a picture of his pigeons, but covers their coloured feathers with smears of black, then tears the painting to pieces. When four wild birds fly into the camp and respond to Sami’s attention, they break through the little boy’s isolation and misery. By the end of the book, Sami has reconnected with life, and is even able to reach out to help a new child arriving at the camp.

Del Rizzo bases her story on an account from the Zaatari refugee camp in Jordan of a child finding solace in some wild birds there. She wisely focuses on what Sami sees and feels without trying to explain too much of the context, relying instead on her visuals to provide this information. The first images of the sky over his former home, glowing with flames and explosions, give way to the beauty of the desert skyscapes in which Sami sees the colourful plumage of his beloved birds. These skillful and imaginative illustrations – created with Plasticine, polymer clay, and other media – give a sense of dimension, which is enhanced by striking and unusual perspectives. My Beautiful Birds is a lovely, timely book.”
—Gwyneth Evans

“This is one of the most beautiful and powerful picture books I’ve seen in a long time. I was…blown away by the emotional impact of both the story and the illustrations. It would make a perfect edition to any middle or high school history classroom. I STRONGLY recommend this one!”

“What a powerful book! Marsha Forchuk Skrypuch and Tuan Ho tell the story of Tuan and his family’s escape from Vietnam in an overcrowded fishing boat in 1981. The story is a true one recounted by Tuan of how he (when he was six years old), his mother, his two sisters and his aunt and cousins made their escape…

Brian Deines’ subtle double-page oil paintings add greatly to the mood and text of this story. There is also an historical and biographical section at the end of the book which explains the conditions in Vietnam in 1981 and what happened to Tuan Ho’s family as they made a new life for themselves in Canada. Tuan has become a very successful physiotherapist and now has a family of his own.

This book is very timely as we have so many refugees from war torn countries in the Middle East now attempting to make their way to a better life under the same kind of conditions that the Vietnamese people experienced back in 1981. With so many refugee children attending schools in Canada now, books like this one can help young children appreciate what some of these children have experienced and develop an empathy for them as they integrate into Canadian society.

I would highly recommend this book for all school and public libraries.”
—Victoria Pennell