The Reading Castle reviews Going for a Sea Bath

“…The English translation of the French book by Andrée Poulin is almost everything you can hope for in a children’s book. It combines a hilarious father-daughter adventure and a funny counting game, learning about sea life with the colorful, lively illustrations by Anne-Claire Delisle. “Going for a sea bath” makes bathing and learning fun. Can you count the legs in the pool? Which animals have no legs at all? And which have eight? Why do hermit crabs live in empty seashells? “Going for a sea bath” is a book children want to talk about! The question is: What will YOU do to make bath time more interesting?”

Posted in Going for a Sea Bath

Uncertain Soldier by Karen Bass has been shortlisted for the 2016 National Chapter of Canada IODE Violet Downey Book Award. This award is offered annually for the best children’s English book containing at least 500 words of text. The winner will be announced at IODE Canada’s 116th National Annual Meeting being held at the Lambton Golf and Country Club, Toronto, on May 27th, 2016.

Also nominated for this award are:

IODE Canada is a national women’s charitable organization dedicated to enhancing the quality of life for individuals through education support, community service, and citizenship programs.

Uncertain Soldier, a suspenseful YA novel about a WWII prisoner of war struggling with conflicting loyalties, has also been nominated for the Forest of Reading Red Maple Award.

“Born in southern Africa, elephants Toka and Iringa were later captured and brought to a Toronto zoo; a third elephant, Thika, was born in captivity. When the zoo’s cramped conditions and cold climate began to impair the elephants’ heath, public outcry resulted in their 2013 relocation to a California sanctuary. In subdued oil paintings, Deines focuses on the elephants’ long, difficult journey, riding in crates on flatbed truck trailers through dangerous weather conditions. Seeing Toka, Iringa, and Thika finally free to explore their new home—80 acres of glowing grasslands—will likely bring relief to sensitive readers. Photographs and additional rescue details round out a sensitive account of animal activism and rehabilitation. Ages 6–9.”

Elephant Journey: The True Story of Three Zoo Elephants and their Rescue from Captivity, written by Rob Laidlaw and Illustrated by Brian Deines, has been nominated for the Hackmatack Children’s Choice Award. Elephant Journey is an account of the road travelled by Toka, Thika, and Iringa, three African elephants, from the Toronto Zoo to the Performing Animal Welfare Society sanctuary in California.

In 2014, No Shelter Here: Making the World a Kinder Place for Dogs, also by Rob Laidlaw, won the Hackmatack Award in the English Non-Fiction category. Its sequel, Cat Champions: Caring for our Feline Friends, was nominated the following year.

“Elliot, an anthropomorphized bunny, is just a regular kid. His parents love him very much, but they don’t know how to take care of him. A man named Thomas comes to help, and he takes Elliot to a foster family where everything is different. His new environment is jarring, but Elliot soon feels understood and cared for. He goes back and forth with his own parents and other families until, finally, he is adopted into a family that will take care of him forever. Fostering is a difficult topic, but Pearson addresses it in a gentle, age-appropriate manner free of blame. Her direct lines keep the focus solidly on Elliot’s emotional reactions, and repetition reinforces a reassuring undercurrent of familiarity in each new home. Gauthier’s collage illustrations, in muted tones and childlike shapes, effectively dampen the realism of the potentially scary scenarios in the story and keep the mood somber but hopeful. Though it might not be representative of every fostering experience, this sensitive story nevertheless could be a comfort to children in the foster system.”—Booklist
— Sarah Hunter 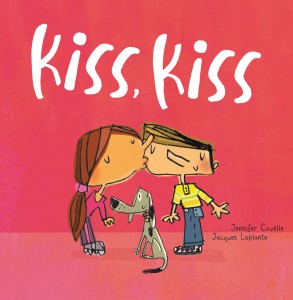 Kiss, Kiss, by Montreal’s Jennifer Couëlle was first published in French as Le bisou. Translated by Karen Simon, it retains a cheerful breeziness; simple rhymes describe the various types of kisses and how they can brighten a person’s day—or night (“Good-night kisses on the head. / Hugs before we go to bed,” accompanies a page that shows dad tucking his kids into a bunk bed). The colourful art of Montreal’s Jacques Laplante—whose simple lines and distinctive graphic style is both sophisticated and amusing— gives this little book wide appeal, although the publisher aims it at ages 3 to 6.

Posted on March 8th, 2016 by pajamapress

“…Karen Bass anchors the fantasy element with such gritty, sore and smelly reality and such nail-biting terror that the reader has no choice but to be hooked.

I read this novel in a single long gulp because I could not put it down. And after I was finished, it stayed on my mind.

Posted in The Hill

“Written by Julie Pearson (an adoptive mother) and illustrated by Manon Gauthier, Elliot is a gentle guide to the foster child system from a kid’s point of view. Elliot’s parents love him, but when he starts crying and misbehaving they don’t know what to do. That’s when Elliot meets a social worker named Thomas…

…The book tackles a complex issue in an approachable and kid-friendly way with adorable bunny characters and soft collage illustrations. It’s a must-read.”

“Rob Laidlaw, one of my favorite children’s authors covering animal protection topics, recently released his latest title, Elephant Journey, which follows Toka, Thika, and Iringa in their travels and experiences. (I received a copy of this book to review.)

…This lifelong journey to sanctuary was no small feat, and the majority of the book’s pages focus on the last leg of the journey from the zoo to California: the fabrication of special transport units, the Canadian-US border crossing, and overcoming mountainous, snowy terrain. Subdued oil paintings by Brian Deines based on actual footage from the trip make this a calm, easy-to-follow and hopeful storyline. And this wouldn’t be a Laidlaw title unless their was some science, which comes in the form of an index, photographs and additional information at the end of the book.

So much of what PAWS does goes without the recognition it deserves. This 40-page book does a beautiful job of telling a powerful story that demonstrates why sanctuaries, animal activists, and nonprofits are so important: because they help real animals who have endured so much, like Toka, Thika, and Iringa, and are making great strides towards creating a world free from harm, free of captivity.