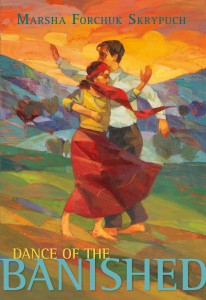 CanLit for LittleCanadians reviews Dance of the Banished

“Dance of the Banished is an old tale.  It’s the familiar love story in which two young people are separated, here by family, distance and war.  But, sadly, it’s also the story of prejudice, fear, and injustice, and the subsequent torment that intensifies that separation.  Dance of the Banished may be an old story in its foundations, but its context is wholly unique, expertly researched and penned by award-winning author Marsha Forchuk Skrypuch…By creating legitimate characters in her fiction who bring varied and personal perspectives to the situations experienced and who speak through their questions and confusions and convictions, Marsha Skrypuch can tell the whole story, not just the public one….And we are grateful for that opportunity and bold honesty.”

“Just as multicultural literature for children and young adults allows readers to understand and appreciate the world around them, international and global books can help them understand the history, languages, and culture of nations around the world…For this week’s book reviews, members of the International Reading Association’s Children’s Literature and Reading Special Interest Group (CL/R SIG) examine some recent international and global favorites that caught their attention.”

“…The book makes it clear how war and its aftermath touch everyone, even [the protagonist’s] sister. Incidents such as the Soviets’ allowing much-needed butter to spoil in the sun due to incompetence or a lack of concern help readers understand Wilm’s anger. The book offers a fresh perspective on life for the Germans after WWII.”

Books to Remember World War I

One hundred years ago today, Austria-Hungary declared war on Serbia, launching the Great War that we know today as World War I. Pajama Press is honoured to work with authors and illustrators who create books about this war for new generations, passing on memories of the past so that it need never be repeated.

CanLit for LittleCanadians reviews Bear on the Homefront

The text and atmospheric oil on canvas illustrations of Brian Deines lend an authenticity to the memories held within Bear on the Homefront.  Teddy has an important story to tell…For his heroic efforts in comforting and giving voice to others when their own words and thoughts probably failed them, Teddy is now safe and treasured at the Canadian War Museum in Ottawa.  So, Bear at the Homefront gives us one more happy ending from a time when there weren’t many.”