Posted on October 7th, 2017 by pajamapress 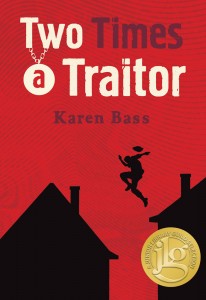 “Violent conflicts occur around the globe every day. History shows how small disagreements often erupt into larger conflicts that can morph into wars. Wars have long-lasting effects on the environment as well as civilians and the troops who fight in them. This week’s column features books that explore some of those wars and conflicts….

[Karen Bass] provides enough details to allow [readers] to draw their own conclusions about the battles between the French and the English and Laz’s own personal dilemma.

“My Beautiful Birds, written and illustrated by Suzanne Del Rizzo, is a beautiful book that will help get your child reading….

This is a good book to read to your child as a bedtime story. The way language is used in the book is beautifully poetic, and even soothing….[The language use] will get your child hooked on reading, as they realize that a vivid image can be painted in their head from just a simple line or paragraph. The child won’t be able to wait until the next plot advancement or change in scenery.

…Also, this story tells a tale that could have taken hundreds of pages, and beautifully condenses it into 32 pages.

Which brings us to the stunning clay art pictures….The emotions conveyed in just the pictures alone will further strengthen the picture in your child’s mind that has been depicted by the strong descriptive vocabulary.”­
—Bennett Duncan

“The plight of refugees have been in the news a lot these days because of the war in Syria. As more and more borders are closed to them, it might be a good time to remember another group of refugees who arrived on North America’s shores and have contributed so much to their adopted country.

When the Vietnam War ended in 1975, and the communist government took over South Vietnam, daily life became so difficult and unbearable that families were willing to risk escaping their country in rickety boats not made for long sea voyages. But these boats were the only way out, unless you were rich….

Adrift at Sea is told from Tuan’s point of view, and aimed at readers about the same age as he was when he escaped Vietnam. Such a young narrator may not capture the truly difficult and risky trip in the kind of detail a book for older readers might, but he still very clearly depicts the fear, the hot sun, lack of water, and relief at being rescued at an age appropriate level that any young reader will be able understand.

Skrypuch has included a number photos of the Ho family, both in Vietnam and in Canada. She has also included a brief history of the ‘boat people’ as the refugees came to be called. The refugees faced not only the kinds of problems that the Ho family dealt with, but there were storms, pirates and always the threat of dying of thirst and hunger, and sometimes, they found that they were not welcomed everywhere.

Using a color palette mainly of oranges, yellows and blues, Deines’s highly textured oil on canvas illustrations capture all the secrecy, fear, and perils, all wrapped up in the dangerously hazy, hot, and humid weather that these refugees faced in their desire for freedom and a better life.

Adrift at Sea is a powerful historical nonfiction story that can certainly help shed light on events of the past that share a similarity to those that are happening in the world today.

This book is recommended for readers age 6+”

“A tender memoir of human decency during wartime as seen through the eyes of the author’s then-8-year-old mother. The setting for Barker’s story is rural Germany toward the end of World War II. Her mother’s family has been sent three French prisoners of war to help at the farm, as German menfolk were in short supply. These are the borrowed men. “When the war was over, we would have to give them back.” This sentence, early on, conveys the youthful sense of fairness that permeates the book: the Frenchmen should be treated with respect, fed well, allowed to celebrate holidays. Barker’s grandmother did just so and quickly learned she would be imprisoned if she continued….Readers will learn some French and German, get a look at life on a farm during wartime, and get the slightest bitter taste of how war changes people: the village policeman used to be kind, ‘but since the war began, he had changed, and we knew enough to be afraid of him.’ An author’s note reveals that Barker’s grandfather would not return from war, nor would her uncle, who is an important character of the story. The addition of old family photos from that time is poignant. This heartfelt picture book helps readers appreciate wartime’s toll.”

“This moving book will enlighten,” The Calgary Herald says of Dance of the Banished

“Based on true events, this story takes place in Anatolia and Canada in 1914, during the break-out of the First World War. When Ali moves to Canada to secure a better life for himself and Zeynep, they communicate by journals. It’s a love story filled with tragedy when Ali is forced into a Canadian internment camp, and Zeynep faces horrors as the Ottoman Army marches through her villages. This moving book will enlighten and appeal to readers ages 12 to adult.”

“…Wilm himself is a teen with a profound sense of responsibility. So many things that occur during the story aren’t really his fault, but he is his harshest critic and holds himself accountable even when he doesn’t need to. He also has a well-developed reflective nature which leads to powerful insights into his true nature and the situation of his friends and family. As a result, he’s an excellent choice for a narrator.

There’s a lot to love here and I feel like I’ve only scratched the surface of what I could have written. But when it comes to the story of Wilm what I loved the most was how Bass was able to make each character complicated, hard to completely admire or condemn. They all seem to have complex motivations for their actions which made for an intense and thought-provoking read.

Both an eye-opening piece of historical fiction and a page-turning, suspense-filled story, Graffiti Knight is an enlightening read that’s hard to put down.”