Posted on December 26th, 2017 by pajamapress 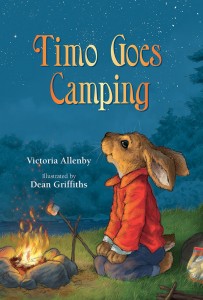 “This delightful chapter book is due to be released in March 2018, plenty of time before camping season here in Canada kicks in….

When the trip begins, Timo immediately finds his knowledge useful, helping tie the frying pan to Hedgewick’s pack with the knots he learned about. As the trip progresses, Timo’s knowledge continues to come in handy. There is much teasing from Suki about the mistakes made along the way, and even about Timo’s book-learning until Timo gathers the courage to discuss how teasing can hurt people’s feelings. I liked the opportunity taken for this discussion and the way it came up naturally through the plot. I liked the topic of a typical Canadian pastime such as camping.

Of course, the thing I loved most about this book was how even Suki agreed by the end that every adventure needs a librarian.

This is a good book for kids to introduce the idea of camping and some of the activities involved in such an adventure, the importance of not going into an adventure without some knowledge and preparation, and about ensuring that teasing doesn’t become hurtful. The illustrations are lovely, bringing the animals to life, along with their environment.”
—Shonna Froebel

Woodrow at Sea “is a delight” says Quill & Quire

Posted on December 8th, 2017 by pajamapress 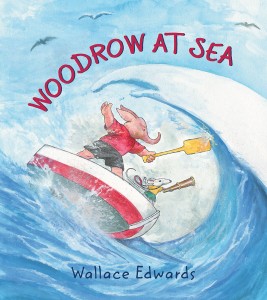 “Woodrow at Sea is another ocean-faring adventure story, this time about an elephant and mouse on separate but strikingly similar journeys…The characters are likeable in their animation and the ‘plot’ finds just the right mix of silly and scary….With this book, [Wallace] Edwards is moving in a different direction, forgoing his rich, deep-coloured palette for one much brighter, and embracing simplicity in his drawings rather than detail and subtext….[T]aken on its own, Woodrow at Sea is a delight.”

“Rory Stowaway longs for adventure. The other mice in his rural community mistrust the Stowaways’ history of exploring the World Beyond, and his own father is determined to keep his family safe at home. Meanwhile, as Rory learns more about his missing grandfather, he becomes determined to find and rescue him, even if he doesn’t quite see how it can be done. In her first novel, Marentette shows promise as a storyteller, creating distinctive characters, building tension, and grounding the fantasy with realistic settings and details. Appearing at intervals throughout the book, Griffiths’ lively shaded-pencil drawings capture the personalities of the characters and enhance the charm of the story. Maps on the endpapers encourage readers to trace Rory’s steps both in town and close to home. With its colorful, dramatic cover illustration, this appealing book will quickly find its audience, fans of mouse adventure tales from George Selden’s The Cricket in Times Square (1960) to Robert C. O’Brien’s Mrs. Frisby and the Rats of NIMH (1971) to Kate DiCamillo’s The Tale of Desereaux (2003).”

“Gr 2-5–Rory Stowaway comes from a long line of adventuring mice. He does not understand why his own papa is so against going out into the world beyond their cozy little home on Biggle’s farm. It’s true that his Grampa disappeared on one of his journeys, but even Gran thinks Papa has gone too far in squashing the family’s exploring ways. Rory can’t help but keep hoping that Grampa is alive, and when some clues come to light regarding his whereabouts, Rory and Gran jump at the chance to find him. The rescue takes them further afield than they imagine, and Rory’s twin, Morgan, has to fight his own less-adventurous nature if he is going to see his brother and Gran again. Themes of courage, family, friendship, and accepting differences permeate the story. Intermittent and well-placed black-and-white illustrations lend a vintage feel to the overall design of the book. A fine debut that deserves a place alongside Cynthia Voigt’s Young Fredle (Knopf) and Richard Peck’s Secrets at Sea (Dial, both 2011).”

Posted on February 20th, 2014 by pajamapress

“Rory Stowaway is a young mouse yearning for adventure. He wants to explore the World Beyond like his ancestors but, ever since Grampa disappeared during one such expedition, his family feels differently. Papa believes his father was eaten by a cat and Gran insists that her travelling days are over. Rory is not so easilydisuaded and soon enough the entire Stowaway family finds itself embroiled in a mouse-sized fantasy bigger than even Rory could have imagined.

Like Arrietty of The Borrowers or Stuart Little, Rory Stowaway is a pocket-sized hero set against rather large odds…When Rory discovers evidence that his Grampa may still be alive, plenty of action ensues. Young readers will delight in Rory’s miniature mouse world and cheer on Rory, Gran and the rest of the Stowaway family as they battle against cats, escape scientists and survive a hurricane.

Meghan Marentette’s debut story is nicely paced and hearkens back to a simpler time—Rory and the ‘Weedle’ mice live in a world without Google, Xbox or iPhones. The Stowaways are thoroughly human despite being mice and young readers will easily relate to the sibling rivalry, family conflicts and Rory’s frustration with his parents as he tries to become the mouse he wants to be. The book itself will appeal to youngsters with its glossy hardcover, a red ribbon bookmark and lively illustrations by Dean Griffiths.

The Stowaways is an engaging story which would also be a wonderful read-aloud book for younger children at home or in the classroom. The book’s endearing characters, exciting plot and the central themes of family and growing up would be fertile ground for classroom discussion.”—Tracey Schindler

“An adventure-seeking mouse leaves the safety of home to search for his missing grandfather in the terrifying World Beyond, with perilous consequences.

Rory Stowaway has grown up in the protected Weedle Mouse community, but he knows “his own life [is] meant for adventure.” Unlike the Weedle mice who scorn them, the Stowaways have “always been known as great explorers.” But ever since Grampa Stowaway disappeared on a caper into the World Beyond, Papa has refused to take Rory and his twin brother, Morgan, exploring, as Terrible Things could happen. However, their Gran’s determined to search for Grampa, and Rory knows he must help her. With remarkable finesse and guts, they begin an incredible odyssey that carries them into a zoological museum and a scientific lab, where they are captured and barely escape through the mail. Meanwhile, Morgan initiates a search for his missing twin, and soon, the whole family’s involved, but not before a flood threatens their lives and home. Although the World Beyond proves as dangerous as Papa predicted, the diminutive but feisty Stowaways are up to the challenge. Black-and-white pencil illustrations capture the Stowaways in action.

“The Stowaways tells the story of twin brothers, Rory and Morgan Stowaway, and their family, which includes Mama, Papa, Gran, and their little sister, Bimble. They are Weedle mice, and they live next to a Cranberry Bog near Biggle’s farm. Unlike the other Weedle mice around them, The Stowaways have a strong spirit of adventure. At the beginning of the story, the reader learns that Grampa disappeared while on an adventure with Great Aunt Hazel, and is believed to be dead. Consequently, Papa has become extremely cautious and concerned for his family’s safety, limiting their travels and trying to restrain their natural inclination towards adventure. However, this restrictive parenting cannot stop Rory and Gran, who go searching for Grampa after discovering clues relating to his possible whereabouts. When they get captured by humans at the Museum of Natural Curiosity and do not return home, Morgan goes after them without telling Mama and Papa. The result is an exciting adventure that brings the family closer together, reignites all of their adventurous spirit, briefly reunites them with Grampa, and finally, sends them all off into the great unknown when a storm destroys their home.

Marentette has created a lovely world that combines animals and fantasy with humans and reality in an original and lively story. Her writing style is elegant yet conversational. Each character has been given a unique and vibrant personality, and the reader is carried through the story caring for their well-being and excited to see what precarious situations they find themselves in next. Griffiths’ simple, black-and-white illustrations jump off the page and add another dimension to this beautiful book.

There are many potential discussion points for students, which makes this story even more interesting to read. The tensions between family members are well-developed, and display many of the issues that all families face. Papa is overly protective and does not want his family to go on any potentially-dangerous trips; Gran is spunky and strong-minded and does what she pleases; and Rory and Morgan are rivals with a relationship that evolves and improves over the course of the story. There are also tensions between the Stowaway family and the rest of the Weedle mice, who do not understand the family’s desire to go on adventures and mock them for it. In addition, there is the general conflict with humans, who capture mice in order to conduct research on them in laboratories. Marentette’s story is therefore not only charming, but also clever and thought-provoking.”

Rating: E—Excellent, enduring, everyone should see it!

Posted on December 31st, 2013 by pajamapress

On December 23rd, 2013, CBC Radio in Nova Scotia aired a short radio drama voiced by Halifax author Meghan Marentette along with the CBC’s Carmen Klassen and Diane Paquette. The script was adapted from The Stowaways, Marentette’s popular new children’s novel about a family of adventurous mice.

Click below to listen to Chapter 11 of The Stowaways.

Posted on December 18th, 2013 by pajamapress

“It’s a great read for the family or for the classroom. There is certainly fun involved, and excitement, and even a bit of tension. What more can we ask?   Long winter nights or January afternoons at school just beg for a fitting story to share. This could be it!”
—Sally Bender

Posted on November 26th, 2013 by pajamapress

“Meghan Marentette re-introduces readers to the charm of family stories that don’t rely on preachy social commentary, unending action, or shock and violence to grab readers’ attentions. The appeal of these books, as with The Stowaways, lies in the bonds of family and friendship, and steadfastness of loyalty and compassion. With the inspired selection of Dean Griffiths as illustrator, the genial nature of the story and characters are even more compounded. While the elements of fantasy allow the delightful Stowaways (the family) to speak, build bicycles, and make Juneberry Paste, it’s their solidarity and amiability, courtesy of Meghan Marentette and Dean Griffiths, that elevates The Stowaways (the book) to its unconventional but quaint familial richness.”