Characters in Sapphire the Great and the Meaning of Life are “engaging, honest, and real…” says HW Book Reviews

Posted on December 1st, 2018 by pajamapress 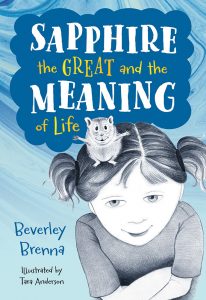 “The story is told through short alternating chapters between Jeannie and Sapphire the Great (her hamster).

This book has left me at a loss for words in a very good way. The characters are so engaging, honest, and real that you forget you are reading a book….The story is complete, satisfying, and just feels right…..

“Like a conscientious hiker, Deborah Ellis treads skilfully through the historical terrain of her thirtieth work, Moon at Nine. The revolutionary tumult of 1980s post-shah Iran might not seem like fertile territory for a YA novel with queer and feminist themes, yet Ellis’s superbly crafted storytelling weaves together the ensuing political chaos with a teenage girl’s struggle to find her place within her restrictive society in a way that reveals the YA genre as capable of more than it is usually given credit for. That Ellis is so comfortable spinning so many plates at once is a testament to her authorial skill; that not one of these plates falls is what makes Moon at Nine such a cracking piece of literature.

…Moon at Nine is the romantic adventure tale longed for by queer teenagers prowling the school library for stories that more closely resemble their own. The novel’s foreign and historical setting are brought to life by Ellis’s energizing prose, and each character is fully realized as a layered human being attempting to negotiate and survive an oppressive political regime. While Deborah Ellis succeeds resoundingly in her pioneering position, Moon at Nine reveals that LGBT themes so dexterously written into YA literature are sadly all too rare.”

Moon at Nine “more than simply an LGTBQ novel or historical fiction.”—Ottawa Review of Books

“As with her many other acclaimed novels such as The Bread Winner, Deborah Ellis manages to avoid stepping on cultural taboos through rigorous research and editing, and her story hits on universal themes such as family secrets, friendships, relationships and coming-of-age. Ellis transports her readers to a foreign land with a very different set of rules, where they can smell the streets and see their colours but also feel the fear and the anger of their people.

…Moon at Nine is more than simply an LGTBQ novel or historical fiction. Like so many wonderful young adult titles today, it is a multi-faceted hybrid that can be enjoyed by both teens and adults. Driving the heart of the story home is the revelation that this book is based on a true story, inspired by an Iranian woman that Ellis met. Farrin and Sadira’s story gives a voice to those who have been silenced and forgotten. It is powerfully grounded in the setting of Tehran, and depicts the beauty of falling in love and the cruelty and coldness of power in the hands of outside forces.”

“Ten years have passed since the Shah was overthrown in Iran, and Farrin, 15, struggles against the oppressive rule of politics, teachers, and her family’s anti-revolutionary secrets. But her budding clandestine romance with Sadira threatens her security most of all; homosexuality is punishable by death. This novel for teens at their formative age exposes the persecution gay lovers face worldwide today.”

Moon at Nine “an extraordinary and original novel”—Small Press Bookwatch

Posted on September 10th, 2014 by pajamapress

“Although a deftly crafted work of fiction, “Moon At Nine” is based upon true events in Islamic countries where homosexuality is punishable by death. An extraordinary and original novel, “Moon At Nine” is recommended for young readers ages 13 and up and is appropriate for highschool and community library collections.”

“Growing up in Tehran in the 1980s, Farrin’s entire life has always been filled with secrets. As secret supporters of the Shah who was overthrown by the Revolutionary Guard in 1979, Farrin’s parents’ illegal activities in support of the Shah could land them all in serious trouble. Her mother has always warned her not to draw attention to herself. Consequently, Farrin has never had close friends at school where she endeavours to keep a low profile. But everything changes when she meets a new girl named Sadira. Sadira’s friendship brings colour and brightness to her days, and soon Farrin knows that her feelings for Sadira are stronger than friendship. But this is Iran, and being gay is considered a crime. Farrin and Sadira cling to a desperate hope that the can somehow be together. But when the truth about their relationship is discovered, they are confronted with the harsh and terrible penalty that they must face for loving one another.

True to form, Deborah Ellis has crafted a stark, riveting and uncompromising account of life in a country and era that is markedly different from our own. Even the day-to-day details of Farrin’s life – the cruel, ever-suspicious school monitor always looking for an excuse to report her to the principal; her father’s driver stealing food from Farrin’s house to feed the other Afghan workers – create a strong sense of the political and religious climate of this time and place. Although the evolution of Farrin and Sadira’s relationship is not shown or explored in any real depth, their plight is nonetheless dramatically depicted. The strength of this novel is in its ability to highlight the social injustices that are still sadly present in our world today. Its heartbreaking and unflinching honestly will both engage readers and create heightened awareness.”

“In 1988 Iran, wealthy fifteen-year-old Farrin avoids anything that could draw attention to her family; she knows her mother’s anti-Ayatollah political gatherings could bring trouble. However, Farrin’s burgeoning friendship and then romance with new girl Sadira leads her to become more inquisitive and involved in the world around her, and eventually leads to the couple’s discovery and persecution. Ellis skillfully introduces readers to the social and political backdrop, showing in troubling detail how fear, suspicion, and historical animosities fragment Farrin’s world and limit her freedom…the social struggle element is more hard-hitting [than those in Farizan’s recent If You Could Be Mine (rev. 11/13)] with a harrowing climax and a realistically bleak ending (both of which may also be a function of this title’s earlier setting). Secondary characters provide fascinating windows into other perspectives and call attention to Iran’s heterogeneity, creating a multidimensional portrait of corruption and cruelty, resistance and compassion. Set in the final days of the Iran-Iraq war and based on a true story, this novel sheds light on an important chapter in history and the people who experienced it firsthand.”

Moon at Nine is “beautiful and heartbreaking”—School Library Journal

“The daughter of wealthy Iranian parents, 15-year old Farrin earns top scores at a prestigious school in 1988 Tehran. Her parents remain loyal to the ousted Shah, so Farrin knows the importance of keep morphs into a romantic relationship, for which both girls could face death. Set during the reign of Ayatollah Khomeini, Moon At Nine is based on real women who feing a low profile. One day, Farrin meets a new classmate, Sadira, who plays forbidden music on a prohibited instrument in a closet at school. Farrin and Sadira become fast friends who enjoy subversive literature and music despite the tough restrictions imposed by the Iranian government. Before long, Farrin and Sadira’s friendshipll in love in a country where homosexuality is still against the law. Sparse and eloquently-written, this short historical novel is both beautiful and heartbreaking. The subject matter and writing style will appeal most to older teens and adults who likely have a better understanding of the political history of Iran. Sadira and Farrin’s relationship is believable, as is the girls’ undying determination to stay together at all costs. While homosexuality is important to the plot, the book is relatively tame, containing no profanity and nothing beyond hand-holding and a few kisses. A four-page Author’s Note provides necessary historical background and insight into worldwide persecution of homosexuals today. Give this to fans of Khaled Hosseini’s A Thousand Splendid Suns (Riverhead, 2007) or Latifa’s My Forbidden Face (Miramax, 2003).”

“Its importance is hard to deny.”—Smithsonian BookDragon on Moon at Nine

“In her ending “Author’s Note,” mega award-winning Canadian author Deborah Ellis…who has built a renowned international reputation for giving voice to children in the most challenging circumstances around the world—explains how her latest novel is true…Adding a succinct historical overview of Iran’s history, Ellis is careful to balance details of Ayatollah Khomeini’s destructive regime with the rich diversity—especially artistically —of the country’s past. But neither does she shy away from the shocking numbers of tragic victims as they relate to this novel…As more and more states strike down anti-gay marriage laws, Moon at Nine is a chilling reminder of the suffering of too many others…its importance is hard to deny.”

Moon at Nine is “sensitive and passionate”—Quick Brown Fox

“…Multi award-winning author Deborah Ellis excels in creating stories of determination in the face of adversity and social injustice. Here, she presents us with a sensitive and passionate tale based on the true life experiences of a young woman in Iran, where execution is the accepted form of punishment for gays or lesbians.

This is a story of love, courage, perseverance and ultimate betrayal by family, friends and country. Beautifully told, Ellis’s work represents the struggles and efforts of young people everywhere to gain acceptance in a world where inclusivity is not just a dream, but a reality.”