A brother and sister evacuated from England during World War II gather strength from a tiny teddy bear.

Child readers, in wartime or not, will give their teddies an extra, grateful squeeze. (afterword) (Picture book. 5-10) 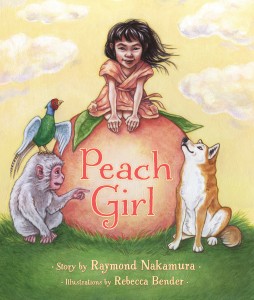 Moon at Nine is “haunting”—Kirkus Reviews

Posted on February 26th, 2014 by pajamapress

“In a novel based on a true story, two teen girls fall in love and face harsh political fallout in post-revolution Iran.

Readers learn the basics of 1980s Iran’s political situation from context and light exposition. Farrin’s family is wealthy, and her mother hosts Bring Back the Shah teas and parties with illicit alcohol. Farrin’s mother discourages her from making friends…When Farrin meets Sadira, however, the two become fast friends, and their bond soon grows. Then, just after the war with Iraq has ended and the new regime is cracking down at home, an officious class monitor catches the two girls kissing and reports them. The consequences are both chilling and tragic…[T]he portrait painted of 1980s Iran’s political climate—and in particular the situation of gay and lesbian people and political prisoners—is haunting.”

“An adventure-seeking mouse leaves the safety of home to search for his missing grandfather in the terrifying World Beyond, with perilous consequences.

Rory Stowaway has grown up in the protected Weedle Mouse community, but he knows “his own life [is] meant for adventure.” Unlike the Weedle mice who scorn them, the Stowaways have “always been known as great explorers.” But ever since Grampa Stowaway disappeared on a caper into the World Beyond, Papa has refused to take Rory and his twin brother, Morgan, exploring, as Terrible Things could happen. However, their Gran’s determined to search for Grampa, and Rory knows he must help her. With remarkable finesse and guts, they begin an incredible odyssey that carries them into a zoological museum and a scientific lab, where they are captured and barely escape through the mail. Meanwhile, Morgan initiates a search for his missing twin, and soon, the whole family’s involved, but not before a flood threatens their lives and home. Although the World Beyond proves as dangerous as Papa predicted, the diminutive but feisty Stowaways are up to the challenge. Black-and-white pencil illustrations capture the Stowaways in action.

“As he did in No Shelter Here (2012), Laidlaw offers a brief history and basic details about a particular kind of companion animal (in this case, cats) and recognizes individuals and organizations who advocate and care for them.

Feline fanciers and casual browsers alike will be attracted by the numerous photos—generally three to seven per double-page spread. Posed or candid, stock photos or personalized portraits, the pictures vary in size and placement but are crisp and colorful for the most part. They showcase oodles of cute cats and playful kittens, some accompanied by the humans who love them. The text, meanwhile, explores a variety of related topics, each covered in a few short paragraphs. From a young girl in China who speaks up against animal exploitation to Canadian and U.S. citizens, primarily children and teens, who volunteer in shelters, raise funds or tend to feral cats, the author profiles people making a difference. He also explains how cats behave, what they need and how readers can help. The friendly, conversational tone begins in the first few pages with a personal note that addresses readers directly and continues throughout. Backmatter includes a “Cat Lover’s Pledge” as well as a page of Web resources, a glossary and an index.

Posted on December 11th, 2013 by pajamapress

This gripping page-turner set in 1947 East Germany explores the aftereffects of war and occupation.

World War II is over and Germany partitioned among the victors. For most in the Soviet-occupied zone, life is grim and anything but peaceful. Hunger’s a constant companion, trust in short supply. Most despise their Russian masters and even more, the German police—Schupos—who do their bidding. With their elders embittered and broken, friendship sustains 16-year-old narrator Wilm and his friends, Karl and Georg. Pretending to spy on the Schupos blows off steam, but after the Schupos beat up Wilm’s amputee father and Wilm learns of the brutal sexual assault on his sister, Anneliese, the game turns real. Supported by Karl and Georg, Wilm starts by scrawling graffiti calling the Schupos “puppets” and vandalizing police vehicles. Risk-taking proves energizing and deeply satisfying—also addictive and eventually desensitizing. It’s at odds with his growing interest in building bridges. The engineer who mentors him lends him books and encourages his interest, but their connection weakens as Wilm’s acts of sabotage escalate. The authentic setting, compelling characters and taut, suspenseful plot claim attention throughout. Bass refuses to oversimplify human beings. When motivations are tangled and complex, actions, even the best-intended, have unforeseen consequences.

Posted on December 1st, 2013 by pajamapress

“Nat the cat is an expert sleeper…most of the time.

In the morning, the humans in the family bump and clatter and honk and hurry, but from somewhere comes a snore. Who could that be? It’s Nat the orange tabby cat; he can apparently sleep anywhere. “Flopping halfway off a shelf, / Folded over on himself, // With his paws all tucked inside, / Or with limbs flung open wide— / Nat the cat can sleep like that!” He can sleep through anything and almost anywhere—but when night comes and the house is quiet, Nat springs into action; he can never sleep through the night. And his humans probably don’t either, since Nat plays with someone’s toes in bed, races down a shadowy hallway and even rides a hobbyhorse. Canadians Allenby and Anderson have captured a cat any young ailurophile will recognize. The simple rhyming text listing the odd (yet realistic) places Nat can sleep during the daytime and all the silly mischief he and his black-and-white kitten sidekick get up to at night will hook young listeners. The watercolor, acrylic and pencil illustrations of floppy, goggle-eyed Nat and his buddy are a just-right pairing.

Kirkus reviews Tweezle into Everything

Posted on November 13th, 2013 by pajamapress

“Tweezle is tired of being the baby monster of the family. He’s a big boy now—and has some not-so-helpful ways of showing it!

McLellan and Griffiths’ previous work, Hoogie in the Middle (2013), had middle monster Hoogie feeling invisible and frustrated. Now Tweezle takes a stand against his birth order. Everyone calls him “little,” but he wants to do something BIG. He tries to help in the kitchen, but the dishes crash to the floor. He tries to help outdoors, but he ends up knocking everything over in the shed. His sisters shout at him: “You’re the lint at the bottom of my pocket!” and “The mud on the bottom of my sneakers!” After this, little Tweezle mysteriously goes missing. His family finds him helping a baby bird that has fallen from the nest. Tweezle has had a big idea after all.Although furry, green and whiskered, Tweezle shares many commonalities with toddlers who are gaining independence. Older siblings in particular will recognize the ways Tweezle’s good intentions sometimes work against him.

“A modern-day Canadian girl named Jane Grey travels back in time to meet the Lady Jane Grey, imprisoned in the Tower of London in 1553.

Bookish Jane is doing research for a paper about her namesake Lady Jane Grey, the 15-year-old who was queen of England for nine days and later executed by Queen Mary. Finding an old prayer book, she reads a prayer out loud and is transported to the Tower of London, where only Lady Jane, who calls her “Namesake,” can see her. Using the prayer book to time travel at will, she becomes friends with Lady Jane and tries to think of a way to save the brilliant and innocent teenager. Meanwhile in the present, Jane tries to escape her alcoholic mother’s increasingly aggressive and bizarre behavior. When the two stories collide just before Lady Jane’s scheduled execution, Jane struggles to save herself and her friend. MacLeod writes the modern sections in a heightened style that almost feels more like poetry than prose. She writes Lady Jane’s dialogue in Tudor English, modifying it only slightly for modern readers. Her vivid descriptions of the filthy turmoil of 1553 London, when even the nobility often had lice, should open some eyes. Most importantly, she strives to get the history right.