Posted on December 29th, 2019 by pajamapress

“At the end of a long day when I was nine months pregnant, my 4-year-old, Winter, asked, ‘Is Daddy going to die?’…

Death is one of the most difficult subjects to talk about with a child. It’s so vast, so many things to so many people that, like wandering Macy’s the week before Christmas, it’s hard to know where to start and you’re tempted to avoid it altogether. There is the obvious fear of traumatizing your child, giving her too long a look into the abyss. There is also the self-conscious suspicion that whatever you end up saying will ultimately reveal more about who you are than it will about the subject itself. Thankfully, a host of new picture books tackle ‘taking the ferry,’ staring down that overtly thwarting subject, and making it personal, peaceful and approachable.

In Christiane Duchesne and Francois Thisdale’s bewitching Bon Voyage, Mister Rodriguez, set in a small seaside town, a group of kids watch the mysterious comings and goings of a man who wears a bright red scarf and looks as if he has ‘clouds under his coat.’ His solitary meanderings through the cobblestone streets and his eccentric love of animals — he attaches wings to a cat’s back, strolls with a goldfish bowl on his head — go unnoticed by the adults. But to the children he is a fascination and delight.

When he abruptly disappears…his absence prompts a strong sense of community as [the children] band together to say their goodbyes…Thisdale’s realistic yet dreamlike illustrations, windswept with mist and surreal painted skies, add to the sense of wonder….

As these four books illustrate and I have come to realize, the conversation about death is alive, shifting and fading, bobbing to the surface and just as swiftly sinking below. It is not one thing for us or for children. When I asked Winter again what she thought about death, there was no memory of my parental wipeout. She simply announced with great confidence: ‘You don’t need a phone.’ She had worked it out just fine.”
—Marisha Pessl

Posted on January 4th, 2019 by pajamapress 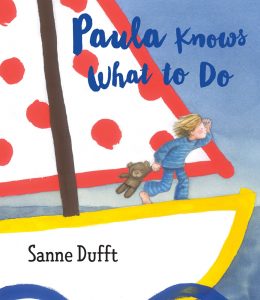 “When a young girl’s father is too sad to get out of bed, she paints him a picture and the two go on an imaginary adventure together….Author/illustrator Dufft’s watercolor illustrations skillfully combine an assured, realistic watercolor style to portray Paula and her father, with a rudimentary childlike stroke to visually highlight the imaginative adventure. Light and shadow are used to great effect to convey mood…A gentle, touching story of loss and resilience and of the beneficial role imagination plays, with visually intelligent and well-executed illustrations.”