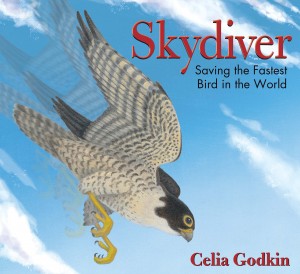 “Because of the effects of the now-outlawed pesticide, DDT, few peregrine falcon chicks were hatching in the wild in the 1970s, which resulted in the breed’s disappearance from much of North America. This story describes the challenges a mature male and female peregrine falcon face when raising their young in the wild, and the determined efforts of scientists and volunteers who appropriate their first clutch of eggs to a sanctuary where the chicks will have a better chance of survival.

Author-illustrator Celia Godkin, renowned for her award-winning picture books concerning environmental issues, once again inspires young readers with an informative account about the natural world – in this case the successful conservation of a species. The operation of a bird sanctuary is outlined, from the arrival of the peregrine eggs to the release of the chicks. Also included are additional facts and websites about these magnificent birds.

Godkin’s beautiful and dramatic oil-on-canvas illustrations, be they of the sweeping vistas in the wild or of the skyscraper-filled cities where peregrines thrive, depict these fascinating creatures from a variety of perspectives. Readers will gain a deeper understanding of the fragile balance and immense survival challenges facing this breed from egg to chick to adult, and how humans, ultimately, have the power to right the wrongs of the past in order to help these raptors, the fastest birds in the world, to flourish.”

“In Skydiver, Celia Godkin tells the stories of peregrine falcons, the severe decline in their population caused by the pesticide DDT, and the human volunteers whose intervention is necessary if the population is to recover. Godkin follows the lives of both the wild and incubated birds, as well as providing background material on the fight to ban DDT.

…An accomplished artist, Godkin also gives us pictures of this extraordinarily swift bird swooping and playing in a sunlight sky, as well as endearing depictions of the awkward chicks with their fuzzy white down and the gawky juveniles with their mixture of adult plumage and baby fluff. It is these illustrations — as well as Godkin’s advice to “Look up!” — that will really inform and excite children about these beautiful birds.”