Kirkus Reviews enjoys “gritty” and “entertaining” Revenge on the Fly

“A fly-catching contest comes to dominate the life of new Irish immigrant Will in 1912 Hamilton, Ontario.   Life isn’t easy for the 12-year-old. His mother and young sister recently died, money is very tight, and rich boy Fred, a new classmate, is savoring every opportunity to humiliate him. Opportunity knocks when the local newspaper offers a $50 prize for killing the most flies as part of an effort to reduce disease. The competition is ruthless, with Fred and his minions collecting thousands of flies and Will trying lots of clever tricks to pull even. Another poor child, Ginny, is besotted with Fred but gradually comes to see the truth about the bully and switches her loyalty and friendship to Will. He struggles with the ethics of his tricks, reminded by the wealthy but even-minded Rebecca of a nobler mission. While the dead-fly count reaches an awesome, even unbelievable level, an author’s note states that the tale is accurately based on a real contest….McNicoll paints a believably gritty portrait of urban life a century ago.   An entertaining visit to the past with a likable guide on a spirited—if icky—quest. (Historical fiction. 9-14)”

“In veteran children’s author Sylvia McNicoll’s new book, grief and anger are the overriding emotions 12-year-old Will Alton feels over the loss of his baby sister and mother to illness in the family’s native Ireland, even as he and his father embark on a fresh start in 1912 Hamilton, Ontario. When Dr. Roberts, Hamilton’s health officer, visits Will’s new school to speak about the role of flies in the transmission of disease, and to announce an essay and fly-killing contest (“You can be a hero to your city, vanquish disease, and win great prizes too”), Will is eager to win.

As determined as Will is to kill “the miserable creatures that had caused my family so much grief” and win $50 to help his father find them a new home (away from the rooming house of the vile Madame Depieu), hostile classmate Fred Leckie is just as relentless. Worse still, Fred has the advantage of being wealthy enough to bribe others to do the work for him, and a father with a factory of workers whom he compels to help his cause. Fortunately Will is tireless, clever, and goodhearted, attributes that are always valuable when facing challenges.

McNicoll never allows her characters or storyline to become predictable. Will, his father, and the rest of the cast possess individual voices that ring true and avoid cliché. And, while the ending is satisfying, it isn’t neatly tied up with a bow. Rather, McNicoll illustrates how difficult life was for poor immigrants in the early part of the last century by framing their struggles against a tragic, peculiar episode in Canadian history.” 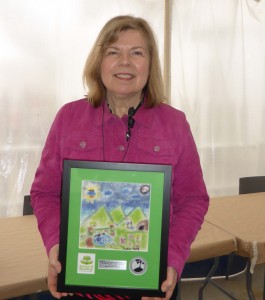 The National Reading Campaign reviews Revenge on the Fly

“…In Revenge on the Fly, award-winning author Sylvia McNicoll breathes life into this little-known snippet of history. Through Will’s eyes we see, hear and smell his city; from its poor rooming houses to its grand mansions. Girls and boys, rich and poor, all enter the contest, pitting hardworking immigrants against the privileged few with all the prejudices, jealousies, and yearning attached to socio-economic disparity. Boys in particular will be fascinated by the uncountable ways one can swat, squish, pinch and vacuum up flies (not to mention some gruesome uses for manure).

It’s how you win, not what you win; who you are, not what you have. These are hard lessons to learn when revenge is on your mind. In a true test of successful historical fiction, we are completely immersed in Will’s world, and readers will await the outcome of the competition with bated breath.”

“…Award-winning author Sylvia McNicoll who has penned numerous early chapter books, middle grade fiction and YA fiction, never submits to the predictable, in her storylines or characters. In Revenge on the Fly, Will, Fred, Ginny, Rebecca, Bea, Ian and Da have the true voices of individuals, never cardboard cut-outs. Even Finnigan has the yips and yaps of a true character, albeit a canine one. And while the ending is gratifying, it isn’t the all-tied-up-in-bows happy ending, because life isn’t like that and in 1912 it definitely wasn’t like that for poor Irish immigrants. Effortlessly Sylvia McNicoll finds the words to illustrate a tragic, but seemingly peculiar, episode in Canadian history and make it personal and unforgettable.”

CM Magazine calls Revenge on the Fly a “winner”

“Sylvia McNicoll, award-winning author of over thirty young people’s novels, has produced another winner…Revenge on the Fly will impress young readers with the importance of basic hygienic measures, like hand-washing, and could spark discussions about epidemics, the history of sanitation, and life in early 20th century Canada. McNicoll brings Will to life so thoroughly…Revenge on the Fly is a startling, thought-provoking work involving fully-rounded characters – and no one can accuse it of lacking realism! Highly recommended.”