In Last Airlift: A Vietnamese Orphan’s Rescue from War, Marsha Forchuk Skrypuch tells the story of one child who was flown out of war-torn Vietnam to find a new life and a new family in Canada. Tuyet’s story is not the only one, however. Today Thi-Mai Murphy shares her own experience.

In April, 1975, an airplane left Saigon carrying nervous aid workers and dozens of frightened babies and children. These were orphans, many fathered by American soldiers and others with disabilities, who were not expected to survive the imminent North Vietnamese invasion.

“No one really knows how old they were,” explains Thi-Mai. Doctors estimated the ages of the children using x-rays; since some of an infant’s 350 bones fuse over time (adults have just 206), they were able to approximate the orphans’ ages by counting their bones. Thi-Mai was judged to be three.

“I don’t remember anything,” she says. “Just stories told to me. We were taken from orphanages to a house near the base, where lines of buses came to pick us up and bring us to the airport. We were rushed in and the pilots only had a small window [of time in which] to take off.”

The plane landed in Hong Kong, where a medical team came aboard to examine the children and remove the sickest ones for treatment. Some of the healthy ones were transferred to another plane bound for England. Thi-Mai continued on to Canada.

Thi-Mai’s adoptive parents didn’t know she was on her way to them. “My parents originally applied for Haiti. They were told adoptions would be halted because Vietnamese children were coming over. Then they were told there were none left (I’m thinking they were talking about the flight that landed in Montreal a week or so before us, but they were already pre-assigned parents before landing).”

When Thi-Mai’s flight landed, an adoption coordinator called her parents and asked if they still wanted a Vietnamese child. They did, and Thi-Mai became one of the family.

It wasn’t always easy for Thi-Mai to feel like she belonged in her new country. “I never really pictured myself [being] adopted until later when I started noticing family pictures. How I was the only dark one in the pictures,” she says. School bullies and the visual reminder of a nearly-all-white community didn’t help.

Thi-Mai’s early childhood will probably always be something of a mystery. A number of the orphans have gotten together for reunions as adults, but what they learn from each other is not always happy. And there are always questions that no one knows how to answer. 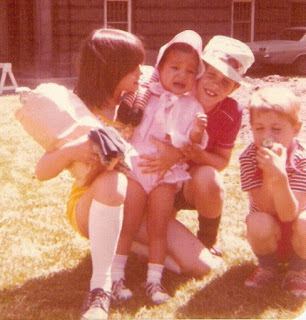 Thi-Mai meeting her new siblings at Surrey Place in Toronto

“There’s always the negative side that no-one delves into…Some lives were destroyed in the process, some ran from their past, some just bubble themselves.”

One concern that comes up frequently is health. “Was I affected by Agent Orange? The Napalm? Do I have cancer? Diabetes? Heart defects?…Some of us  have discovered issues within our bodies that medically we contracted when we were younger. Where and when is a mystery.”

Origin is another mystery. “Many of us don’t look Vietnamese. Some look Cambodian, some Laos, etc.” It is possible that some of them fled to Vietnam from other countries, hoping to be airlifted to safety. Most will never know whether they came as orphans or with families of their own.

The heroic rescue of orphans from a war zone makes for a wonderful story.  It is much more difficult to talk about the identity struggles those orphans later experienced. Thi-Mai is a truth seeker, and she wants to know everything she can about her history—the good and the bad. 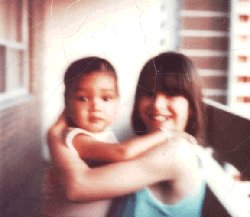 Thi-Mai with her new sister, Colleen

“All in all, the conclusion to most [of the orphans] is, ‘we were in an orphanage in Vietnam and adopted into loving homes,’” she says. “Silence is heard from

those who beg to differ.” (Thi grew up in a loving home. Some did not.)

Thi-Mai has never returned to Vietnam, but she plans to. In the meantime, every month she meets with others from her flight, both orphans and volunteers, for Vietnamese food—“Something most of us never had growing up, until we met.”

As for her children and future generations, Thi-Mai will make sure they grow up knowing as much as possible about their heritage—medical, biological and cultural. The connections Thi-Mai has with other orphans and with volunteers who were involved in her flight will help to answer their questions as well as her own.

“My son knows his mom’s past now and more about his background,” she says.

She adds that when friends and teachers ask him where he is from, he talks about Vietnam. “I have an extended family out there,” he says.