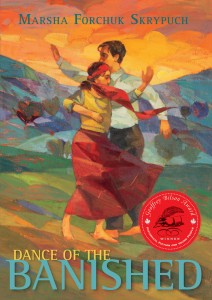 British Columbia artist Pascal Milelli created an illustration of a couple dancing the semah for the cover of Dance of the Banished.

International Dance Day is a yearly event intended to celebrate dance as a universal art form that brings people together across cultural, political and ethnic barriers as a shared language. We’re celebrating today by giving centre stage to the semah, the traditional ritual-dance of the Alevi-Baktaşi people that is still flourishing today.

Both of the main characters in Dance of the Banished are Alevi, and Marsha Forchuk Skrypuch did a lot of research so she could depict these little-known people and their customs accurately. In her Author’s Note she writes that Alevism is “a 6000-year-old religion that originated in Anatolia. Over the centuries Alevism has incorporated aspects of other religions. For example, Alevis consider Ali, the son-in-law of Muhammed, to be divine. Alevis avoid mosques and do not pray five times a day. They consider women equal to men.” (229)

The semah is the key form of worship among the Alevi. It is a twirling dance where men and women dance together but never touch. The semah’s style can vary widely depending on where it is performed, but its movements are always an expression of faith that symbolism the relationship between God, the Universe and Humanity; the rotation of planets; the progression of time and change; Ali’s ascension into Heaven; and the flight of cranes. It is always accompanied by a devout musician, often the community’s dede (spiritual leader), playing the bağlama (also called the saz), an instrument like a long-necked lute, but the music’s rhythm and characteristics also vary with community and region.

The dance is commonly understood to have three parts. The ağırlama, the first stage of the dance, is characterized but slow movements; the yürütme, when the dance becomes more lively and the dancers begin to move around in a circle while making swooping arm gestures, and finally the yeldirme, the fastest and most difficult part of the dance.

In 2010 the semah was registered on UNESCO’s Representative List of the Intangible Cultural Heritage of Humanity. There are several organizations in and outside of Turkey that work to protect and preserve this ritual-dance for future generations of Alevi, including offering semah training courses to Alevi youth and instruction in the bağlama for young men.

You can learn more about the semah and the Alevi people in Dance of the Banished by Marsha Forchuk Skrypuch, or by checking out the links below.

Pascal Milelli is an artist and painter based in British Columbia. He has contributed his talents to a variety of projects worldwide, including tea packaging in Holland, videogame slipcovers in England and book jackets. Perhaps his most recognizable work is the original cover art for Deborah Ellis‘ Breadwinner trilogy. Pascal is also the award-winning author of three children’s picture books. Click here to learn more about Pascal and view his portfolio.

Posted in Dance of the Banished | Tagged blog-post, dance-of-the-banished, marsha-forchuk-skrypuch, ya, young-adult