Too Young to Escape: A Vietnamese Girl Waits to be Reunited with Her Family is included in CBC Books list of “12 Canadian books to commemorate Remembrance Day”

Posted on November 12th, 2018 by pajamapress 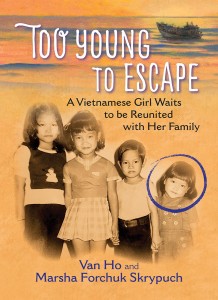 Too Young to Escape: A Vietnamese Girl Waits to be Reunited with Her Family has been recommended by CBC Books in a list of 12 Canadian books which “describe the experience of war and its impact on human life.”

“This stunning book tells the story of Tuan Ho, who at age 6 was forced to flee Vietnam with his mother and sisters….

His flight would be traumatic: terror, grief, gunfire, strangers, and perilous days adrift at sea. This taut account conveys exceptionally well just what refugee children endure, enlarging our compassion and will to be among those who welcome, comfort, and receive them today.

Deines’ brilliant paintings easily carry the weight of this story and knit our hearts to Tuan’s family. An afterword, accompanied by some personal photographs from Tuan, provides background to the exodus of the ‘boat people’ from Vietnam and tells more about Tuan’s family’s journey.”

Posted on November 25th, 2016 by pajamapress

“This is not the first time Skrypuch has dealt with Vietnam….The author’s familiarity with her subject is evident here, and Tuan’s dramatic story of survival comes alive in Skrypuch’s capable hands. The heart-pounding action alone is enough to captivate readers, but Skrypuch also incorporates moments of great poignancy that add depth and emotion. As little Tuan watches a nearby boat filled with people erupt in flames and slowly sink, he reflects that there is nothing he can do to help and wonders if the same thing will happen to his boat. This is just one of many scenes with the potential to inspire empathy and discussion about the plight of refugees.

Deines’s accompanying artwork is achingly beautiful. Rich, warm colours make readers feel they are experiencing Vietnam for themselves. That danger can exist amid such beauty is an important lesson to learn. That the human spirit can triumph under the most trying of conditions is even more important.”
—Sarah Sorensen

Posted on November 7th, 2016 by pajamapress

“…Today we are all aware of the refugee crisis that grips the world. Too many people are forced to flee their homes in search of safety and a better life, away from the strife and danger in their own villages, towns, cities, countries. We see their faces, hear their stories and share their hopes for a happier future.

In 1981, the ‘boat people’ from Vietnam are struggling to deal with what has happened in their own beloved country. They, too, see their only hope is in leaving….

The authors include personal photographs of Tuan’s family, before their escape and following their settling in Canada, to help readers understand this historical moment in time. Added information includes a map, archival and family photos, and an explanation for the need to leave….

The dangers were many, their journeys harrowing, and the time spent in refugee camps often too long. Still, they stayed the course and eventually many settled in ‘the United States, France, Australia, and Canada.’

Brian Deines (as he always does) has created truly beautiful artwork using oils on canvas to bring Tuan’s story to this book’s readers. From the lush, tropical street in Ho Chi Minh City, the dark seashore, the blistering heat of a sun-filled sky, the clear blue beauty of the sea beneath them where dolphins play, to the almost overpowering arrival of the aircraft carrier, we journey with the family as they make their courageous way to a new life.”