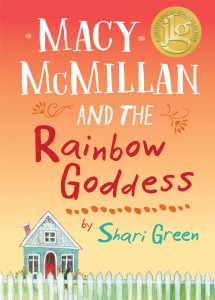 “This verse novel is admirable. Its wonderful characters, memorable plot, perfectly chosen language and form, familiar settings, unwelcome changes and humor offer readers a very personal look at a young girl struggling to find her way. She does it with the help of family and friends. The stories, notes and cookies that Macy shares with her ‘rainbow goddess’ leads to a very unexpected friendship – and the heart of this very special book.”

“Macy, a deaf sixth-grader who attends a mainstream school with an interpreter, faces enormous challenges, as her mother will soon marry, necessitating a move to her new stepdad’s house. Macy and her mother have always been a team of just two; adding Alan and his twin daughters is scary and distressing….The verse trails down the pages in narrow bands leaving plenty of white space. Even characters that are barely sketched emerge fully realized through the spare yet poignant narrative….When one twin endearingly makes the sign ‘sister’ to Macy, it’s an affecting moment of deep promise. Macy’s life lessons are realistic and illuminating; that she is deaf adds yet another dimension to an already powerful tale. (Fiction. 9-12)”

Nix Minus One is “Refreshing” YA novel—School Library Journal

Posted on August 2nd, 2013 by pajamapress

“Maclean’s novel in verse has a hypnotic rhythm that pulls readers into the mind of 15-year-old Nix. Formerly known as “Fatty Humbolt,” he is struggling with his crush on Loren Cody, the girlfriend of the best player on the hockey team, and his love-hate relationship with his older sister, Roxy. With her “Vampire Red” hair, endless stream of boyfriends, and rebellious energy, Roxy is the polar opposite of Nix, who likes to fade into the background and thinks it’s hard to talk to anyone, let alone members of the opposite sex. Nix finds solace and self-expression in his woodworking. Then Roxy falls for Bryan Sykes, a popular but notorious cad and politician’s son, and Nix is forced to come out of his shell and find his voice. The poems successfully capture the cadences of modern teenage speech and behavior in unadorned language. The sparse verse also provides the perfect narrative voice to express Nix’s taciturn strength. Readers used to a diet of cliché-ridden YA fiction will enjoy this refreshing take on the teenage plight, and, although the ending is particularly painful and poignant, the hard-won hopefulness of Nix’s growth will linger with them long after the poetry ends.”

Nix Minus One is PW “Best New Books” pick

Pajama Press is pleased to announce that Nix Minus One by Jill MacLean is a Publishers Weekly Pick for the “Best New Books for the week of July 29, 2013.” One of eight selections in a variety of genres, MacLean’s book was chosen by PW‘s editors  from among their many previously-reviewed, recently-released titles.

You can view the full list of PW Picks here.

You can read PW‘s review of Nix Minus One here.

Publishers Weekly praises Nix Minus One

“… MacLean (The Present Tense of Prinny Murphy) writes in short free-verse chapters that read like prose stripped of all unnecessary words. An introvert, Nix watches in dismay as his tempestuous sister flirts with drugs, alcohol, older boys, and risky social scenes: “I thought the yellow sun/ rose over the mountains and set over the sea/ on my sister Roxanne./ Then she hit puberty./ Head-on collision.” More observer than participant at home and school, Nix comes alive in his father’s woodworking shop: “I pick up the dovetail saw,/ cut into the sockets, chisel out the waste…. and by now I’ve forgotten/ anyone’s watching.” Writing with careful, evocative language, MacLean explores love in myriad forms: Nix’s concern for a neighbor’s abused dog that he longs to rescue, his crush on one girl and budding friendship with another, Roxy’s affection for her brother, and his family’s grief over a devastating tragedy.”

The Montreal Gazette praises free verse in Nix Minus One

Posted on April 1st, 2013 by pajamapress

“Poetry, at its best, has the power to evoke a maximum of emotion with a minimum number of words. As such, it’s a fitting tool for an author whose novel revolves around a teenage boy best described as tongue-tied and introverted — and whose life goes into overdrive when the usual changes that accompany puberty are added to those of a family with its share of secrets.

Nova Scotia’s Jill MacLean has set her most recent novel in Bullbirds Cove, a small town in Newfoundland that used to be home to 37 families but where, now that “the codfish are gone from the sea (and) groundfishing closed years ago,” only 23 families remain — including the Humboldt family. Fifteen-year-old Nixon (better known as Nix) and his 16-year-old sister, Roxy, are part of that family. In telling their story, MacLean uses free verse — which might sound off-putting to some, but actually turns out to be a great way to put into words what Nix thinks and has trouble saying. It also makes for a well-paced story that will leave readers thoroughly engaged with the characters, and probably reaching for a tissue or two before getting to the final page.”

For Those Who Know reviews Nix Minus One

“Beautiful verse, weirdly romantic, fantastic setting in Maritime Canada, violent, redemptive, sad, uplifting. I really loved this. I especially love the brilliantly simple cover and the woodworking motif that permeates the book. The cover is TEXTURED! Check it out!”