Posted on September 21st, 2012 by pajamapress

With the bicentennial celebrations of the War of 1812 in full swing, Laura Secord is the lady of the hour. But what part did she really play in the war? Myths and misconceptions about this historical figure abound, and historians have debated her role for years. How well do you know Laura? 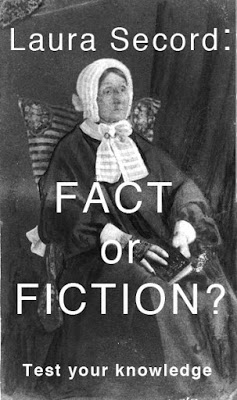 1. Laura Secord is one of the most famous heroines ever born on Canadian soil.

False. Surprise! Laura was born in Great Barrington, Massachusetts. Her family moved to Upper Canada when she was a young woman and she spent the rest of her life in what is now Southern Ontario.

2. When her hometown of Queenston was taken over by the Americans during the War of 1812, Laura—like other women still living in the occupied territory—was forced to cook for any American soldiers who came to her house.

True. Feeding and billeting enemy soldiers has been the lot of families in occupied territory for much of history.

3. Laura overheard some American soldiers discussing plans to capture Lieutenant James FitzGibbon, who was leading a band of soldiers and First Nations warriors in guerrilla raids of American-occupied territory. Since her husband was wounded, Laura decided it was her duty to try to warn FitzGibbon herself.

True. James Secord had been injured in the battle of Queenston Heights and would never fully recover the use of one leg. Laura Secord Clark, our heroine’s granddaughter, told historians in 1933 that James doubted his wife’s ability to make it to FitzGibbon at Beaver Dams, but she was determined to go.

4. Since she was living in American-occupied territory, Laura needed a cover story to get past the sentries. She took a cow with her on the first leg of her journey as an excuse for leaving town.

False. This story was introduced by the historian William Foster Coffin in the 1960s and is still widely believed.

Unlikely. Laura’s exact route is much contested, although tourists can now walk a marked trail that recreates it. She certainly avoided the main roads in order to escape the notice of American patrols, but some historians suspect she found a trail near the swamp rather than going straight through it. The condition of her footwear is not known.

6. Unfortunately for Laura, FitzGibbon already knew about the surprise attack, so her whole journey was in vain.

False. Historians believed for many years that FitzGibbon’s scouts had warned him of the attack before Laura arrived, or that she arrived too late for her warning to do any good. Then, in 1959, a certificate was found in the Canadian National Archives in Ottawa on which James FitzGibbon had recorded the date of Laura’s arrival and the fact that she brought him information he did not already know. He added that he planned his strategy for the battle “in consequence of this information.”

7. The government rewarded Laura handsomely for her efforts.

False. Laura was given no formal recognition for her part in the War of 1812 until after her death. The one reward she was given came in 1860 when Prince Albert Edward, who would one day become King Edward VII, visited Canada and was surprised to see a woman’s name on the roll of veterans of the War of 1812. He asked questions, learned her story, and sent her 100 pounds in gold upon his return to England.

False. The Laura Secord chain of chocolate shops began as a single small store in Toronto in 1913. According to the chain’s website, its founder, Frank P. O’Connor, admired Laura as a Canadian “symbol of courage, devotion, and loyalty.”

This quiz was composed by Erin Woods using information from the historical note of Acts of Courage: Laura Secord and the War of 1812 and from an interview with the author, historian Connie Brummel Crook.