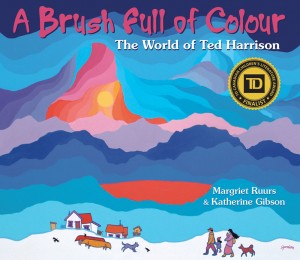 We are proud to announce that A Brush Full of Colour: The World of Ted Harrison by Margriet Ruurs and Katherine Gibson has won the 2016 Crystal Kite Award for Canada.

Founded in 1971, the Society of Children’s Book Writers and Illustrators is one of the largest existing writers’ and illustrators’ organizations, with over 22,000 members worldwide. It is the only organization specifically for those working in the fields of children’s literature, magazines, film, television, and multimedia. The organization was founded by Stephen Mooser (President) and Lin Oliver (Executive Director), both of whom are well-published children’s book authors and leaders in the world of children’s literature.  For more information about the Crystal Kite Award, please visit www.scbwi.org, and click “Awards & Grants.”

A Brush Full of Colour wins the 2015 Information Book Award

Posted on November 9th, 2015 by pajamapress

Pajama Press is pleased to announce that A Brush Full of Colour: The World of Ted Harrison by Margriet Ruurs and Katherine Gibson is the winner of the 2015 Children’s Literature Roundtables of Canada Information Book Award.

The results were announced on Saturday, November 7th at the Vancouver Roundtable’s Illustrator Breakfast. The award will be formally presented on January 27th, 2016.

A Brush Full of Colour is a picture book biography of Ted Harrison, Canada’s most iconic painter of the Yukon. In addition to the Information Book Award, it has been nominated for the TD Canadian Children’s Literature Award, the Ruth & Sylvia Schwartz Children’s Book Award, the Rocky Mountain Book Award, the Silver Birch Non-Fiction Award, and the Hackmatack Award.

“Ted Harrison, one of Canada’s most recognized and celebrated artists, died in January, 2015. Using a distinctive style that particularly resonates with children, he portrayed the Canadian west coast and Yukon landscapes in vibrant, non-traditional colours. A Brush Full of Colour follows the life and career of Harrison, from his youth in a coal-mining town in northeast England.

…This inspirational and informative biography includes many stunning examples of Harrison’s luminous artwork as well as resources, sources and a foreword written by the artist himself: “I urge you to keep on reading, writing, and painting. Develop your own style and keep it honest and true to who you are. Find inspiration in the world around you, and you will make the world a happier and more creative place.”

Two Pajama Press books have been nominated for the 205–16 Hackmatack Children’s Choice Award.

Skydiver: Saving the Fastest Bird in the World, a picture book illustratedby Celia Godkin, chronicles the successful efforts of scientists to reintroduce peregrine falcons to their former territories in North America after the population was depleted by the effects of DDT.

A Brush Full of Colour: The World of Ted Harrison, a picture book biography written by Margriet Ruurs and Katherine Gibson, recounts the life of Canada’s iconic artist of the Yukon. Filled with full-colour examples of Ted Harrison’s art from throughout his career, the book also features an introduction written by the artist himself.

A Brush Full of Colour a “wonderfully visual celebration”—Booklist

“Best known for his colorful paintings of the Yukon, Ted Harrison grew up in England’s drab, gray coal country. His military duties during World War II took him to India, Egypt, and Kenya. After the war, he taught art in Malaysia and New Zealand before he and his wife moved to Canada, where they fell in love with the Yukon. Inspired by the landscape, he moved away from his traditional, formal art training and developed his own distinctive style, notable for its simplified forms, unusual colors, and underlying sense of joy. Harrison has illustrated several books, including O Canada (1993) and Robert Service’s The Shooting of Dan McGrew (1988). Ruurs and Gibson’s beautifully designed volume combines a clearly written account of Harrison’s life and work with photos of his early years and, later, many of his paintings. Seldom does an artist’s biography for children offer so many beautiful reproductions of the subject’s work. Pair this inviting book with Ashley Bryan:Words to My Life’s Song (2009), another wonderfully visual celebration of an artist following his own path.”

“Gr 3-6–An outstanding, well-organized biography about the life of Ted Harrison, one of Canada’s most recognized and popular painters. The book chronicles the man’s life, from his birth in the coal mining town of Wingate, County Durham, England, where his father gave him pencil and paper and told him to draw; to art school and military service post–World War II, which gave him the opportunity to see the world; to teaching art in Malaysia; and finally immigrating to Canada and combining all the designs and techniques he had seen around the world and finding his own style. Harrison vowed that his paintings would only depict positive images. He developed a colorful, vibrant technique that reflected the joys of life. While many love his work, others are more critical. However, Harrison remains upbeat: “‘We must be who we are in everything we do, no matter what others say.’” This book is filled with quotes from Harrison and examples of his work, all demonstrating his love for vivid colors and flowing lines. VERDICT A joy to look at and an inspiration to read.”
—Paula Huddy, The Blake School-Highcroft Campus, Wayzata, MN

A Sad Goodbye to Ted Harrison

Ted Harrison, Canada’s most iconic painter of the Yukon, passed away in Victoria, British Columbia, on Friday, January 16, after a long illness.

The artist, who was 88 years old, is known for his highly imaginative and vibrantly coloured interpretations of the arctic landscape. He was also the beloved author and/or illustrator of many children’s books, including A Northern Alphabet and Robert Service’s The Cremation of Sam McGee and The Shooting of Dan McGrew.

Born in County Durham, England, Harrison dreamed about the arctic as a child reading the works of Robert Service and Jack London. In 1968, after years of travelling the world, he realized his dream and settled with his family in the Yukon. Challenged and inspired by the landscape there, he shed the techniques of his formal art training in order to capture the wild wonder of the north.

While audiences were at first taken aback by Harrison’s bright colours and stylized images, he has since become one of our country’s most beloved artists. In 1987 he was awarded Canada’s highest civilian honour, The Order of Canada. In 2004, he was made a member of the Royal Canadian Academy of Arts and presented with the Order of British Columbia in 2008. In 1993, Harrison and his wife moved to Victoria, where he continued to paint. He also taught art workshops in classrooms across the country, dedicating himself to the causes of art and education.

“Art must be part of every child’s education,” he said. “Painting is the last great freedom. You can paint what you like.”

Pajama Press was privileged in 2014 to publish the picture book biography A Brush Full of Colour: The World of Ted Harrison. This project gave us the opportunity to work with two authors with personal connections to Ted Harrison: Margriet Ruurs, who was his neighbour for many years, and biographer Katherine Gibson, who spent four years interviewing him for her groundbreaking adult book Painting Paradise.

We are richer as a country for the legacy of Ted Harrison. He will be sorely missed.

Posted in A Brush Full of Colour | Tagged ted-harrison

“This is a must have.” Resource Links reviews A Brush Full of Colour: The World of Ted Harrison

“If you have a Ted Harrison book, this is a must have. A Brush Full of Colour tells the story of Ted Harrison from his birth in 1926 England and follows his development as an artist to the present day, living in Victoria. The book is full of Harrison’s paintings, including his earlier work before he developed his recognizable style. The text is easy to read, comprehensive, and interesting.

The text is divided into chapters: Childhood, Travelling the World, Life in the North, and A Full Time Artist. Each page is filled with colourful reproductions of his paintings, photographs, memorabilia, and artist sketches. Readers will be amazed to discover the influences in his work and the growth in his style. Harrison wrote the preface and several of his quotes are interspersed throughout the text. As a result, the reader gets a good understanding of who Ted Harrison is. The authors include questions below most of the reproductions to further guide the conversation. (“What do the ravens tell us about the weather that day?”)

A foreword by Ted Harrison, Table of Contents, and Index are included in this beautifully presented book. [It also includes] Acknowledgements, Sources and Resources.

Highly recommended for all Canadian libraries.”

“… Abundantly illustrated, the generally lively text is accessible and well-paced, and (thankfully) the didactic asides and discussion prompts are relegated to the paintings’ captions. Backmatter includes a helpful index and related books, websites and films. A child-friendly introduction to an iconic, wonderfully accessible and quintessentially Canadian artist. (Picture book/biography. 5-8)”

A Brush Full of Colour in Victoria

Posted on December 4th, 2014 by pajamapress

This week Margriet Ruurs and Katherine Gibson travelled to Victoria, British Columbia, to present A Brush Full of Colour: The World of Ted Harrison at the Saanich Centennial Branch of the Greater Victoria Public Library. The event was organized jointly by the Victoria Children’s Literature Roundtable and Schoolhouse Teaching Supplies, under the able leadership of Pat Oldroyd, seen introducing the authors below. The night included a PowerPoint presentation about Ted Harrison; a raffle for a mounted poster and a copy of A Brush Full of Colour; book signings; cookies; and lots of fun.

Thank you to everyone who braved the cold weather to come out, with special thanks to Moira Gardener for sharing the pictures below. 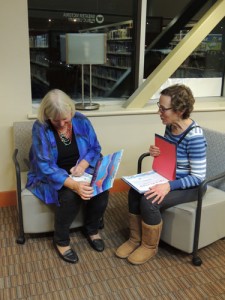 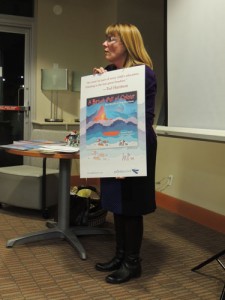 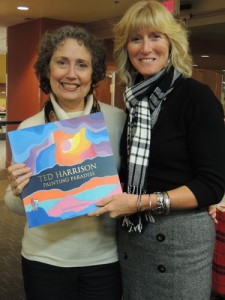 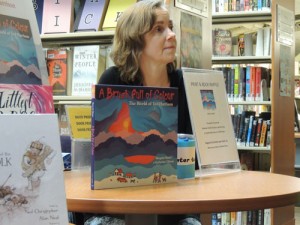 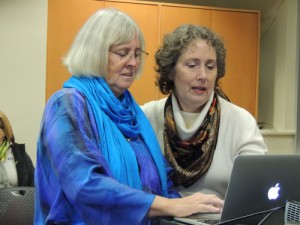 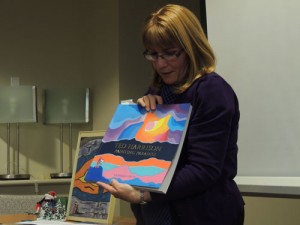 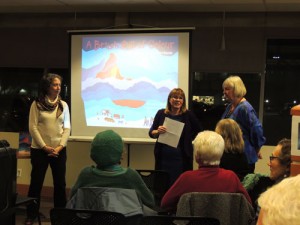