Snuggle Up and Read for Family Literacy Day

Inspired by the Family Literacy Day booklist compiled by the Canadian Children’s Book Centre, a teacher at J.W. Trusler Public School decided to organize a “Snuggle Up and Read” event, inviting parents to bring their pajama-clad children to school in the evening for cookies, milk, and story time. The evening’s feature family-themed book? Hoogie in the Middle. 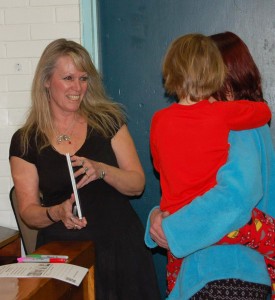 Stephanie McLellan, author of Hoogie in the Middle, heard about the event. Undeterred by a long, snowy drive and the expectation of a small audience (J.W. Trusler only has about 150 students), she decided to attend herself. The school staff, eager to welcome an award-winning author, spread the word to families, baked cookies, and acquired enough milk and books for a crowd.

The next day The North Bay Nugget described the event, which ultimately included over thirty families—more than 100 people: “Children came in their pyjamas and brought pillows, blankets, and favourite books. Board superintendent Amanda Meighan also read the award-winning bedtime story, ‘Nat the Cat Can Sleep Like That.'” 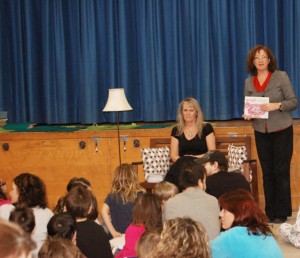 Debbie Woods, the teacher who organized the event, described families using blankets and pillows to create cozy campsites on the gym floor while they listened to the stories. Stephanie McLellan called it “a fantastic event” on social
media, adding that “Debbie had a goodie bag for every family which included a book…”

Pajama Press salutes Debbie, Stephanie, and the CCBC for doing so much to encourage literacy and a love of books among children and their families.

Pajama Press is pleased to announce that Nat the Cat Can Sleep Like That, written by Victoria Allenby and illustrated by Tara Anderson, has won the 2014 Preschool Reads Award.

Developed by Wee Read Guelph, Wellington, and Dufferin County, the Preschool Reads program is a reader’s choice award for young children who listen to a shortlist of four titles and vote for their favourite. This year’s shortlist also included:

Nat the Cat Can Sleep Like That is featured in the January/February 2014 issue of Chirp Magazine, the theme of which is “Time for Bed!” Reviewers have also been charmed by this determinedly dozy feline. Here’s what some of them had to say:

“…Allenby and Anderson have captured a cat any young ailurophile will recognize. The simple rhyming text listing the odd (yet realistic) places Nat can sleep during the daytime and all the silly mischief he and his black-and-white kitten sidekick get up to at night will hook young listeners. The watercolor, acrylic and pencil illustrations of floppy, goggle-eyed Nat and his buddy are a just-right pairing.

“In Nat the Cat Can Sleep Like That, author Victoria Allenby’s poetic text and illustrator Tara Anderson’s whimsical art lulls kids – and kitten – to sleep, making it a lovely bedtime read

But it’s more than a bedtime story: it’s a tale of friendship and acceptance. It’s a story in which kids safely explore relational differences and boundaries through the eyes of cats.

…. Parents and teachers will love Allenby’s word play. Her use of repetition and alliteration is calming and her steady cadence is mesmerizing. Nat the Cat Can Sleep Like That is a story of love and limits… and it might just induce a good night’s sleep.”—The National Reading Campaign

“The rhyming word choice is spare in this delightful picture book for younger children, and deliberately so….Tara Anderson’s illustrations are whimsical and fun… Although the illustrations complement the story, they also tell a story of their own, encouraging children, and their grownups, to read the story again and again.

The mood of the book is playful, easily appealing to a preschool audience. Victoria Allenby’s title is a perfect choice for bedtime and storytimes for young children. Highly Recommended.”—CM Magazine ****/4

“This rhyming story has a playful tone, great for reading aloud to preschoolers. The adorable illustrations by Tara Anderson, rendered primarily in pencil crayon, will appeal to the target audience a great deal, and may even inspire them to try their hand at similar drawings. The onomatopoeia in words like “whoosh,” “shush” and “hush” further add to the light heartedness of the book, and will be fun for kids to imitate.”—Resource Links