Family Event at North York Library with A Brush Full of Colour: The World of Ted Harrison 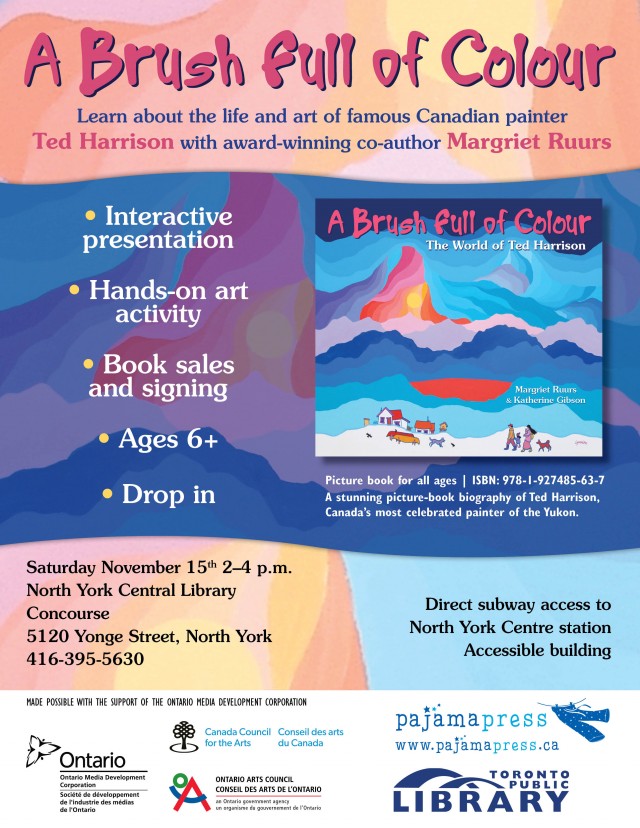 Nat the Cat Can Sleep Like That Book Trailer

Nat the cat can sleep anywhere and any way—but can he sleep through the antics of a rambunctious kitten? Find out in Victoria Allenby and Tara Anderson’s award-winning book, perfect for bedtime and story time!

Posted on March 7th, 2014 by pajamapress

Pajama Press is proud to announce that three of our titles have been shortlisted for the 2014 Canadian Library Association Awards.

We congratulate our three nominated authors and look forward to hearing the award results the week of April 14th.

Posted on February 20th, 2014 by pajamapress

Award-winning author Stephanie McLellan has drawn inspiration from her own three children and created Hoogie in the Middle, a sneak peek into the world surrounding Hoogie, the middle child. The author playfully uses rhythm, alliteration and similes to delineate Hoogie’s character and exhibit how the middle child feels: “Pumpkin is the big, big girl,” “Tweezle is the itty, bitty baby” and “[Hoogie] feels like the hole in the middle of a donut.”

Whatever Hoogie does is not right. When Tweezle squishes food, “Everyone laughs.” When Hoogie does it, she is told to “not be such a baby.” Similarly, she is “too small” to help dad. “Too big. Too small. No room for me at all,” sums up the pain she feels. In the end just like “the sun in the middle of the solar system,” Hoogie isn’t so invisible anymore. McLellan finishes her story with a deliciously sweet simile!

Continuing in this series,

Tweezle into Everything follows in the footsteps of the typical baby of the household where Tweezle is the “last yummy cookie.” Charming similes and playful dialogue express Tweezle’s adorable character, constantly trying to prove he is big: “I not baby…I big boy!” He believes he is all grown up he messes his father’s tool shed, or enhances his older sister’s paintings. However, Tweezle is made to feel like the “…mud on the bottom…” of his sister’s shoes. Yet he refuses to give up: “I not bottom.” The book has an unpredictable and heart-warming ending, showing that what Tweezle unexpectedly does is indeed a “big deal.”

This loveable family comes alive with Dean Griffiths cuddly personified monsters. Vibrating hues painted in pencil crayons and watercolours evoke an expressionistic style with realistic elements. The clever use of negative space adds dimension and energy to the characters as well. Consistent rendering makes switching from each book in the series a seamless transition. The difference is the focus on the title characters, e.g. Hoogie holding a donut over one eye exaggerating the fact that she feels “like the hole in the middle of the donut” or Tweezle holding a large beach ball reinforcing his babyish stature.

Hoogie in the Middle and Tweezle into Everything explore the wonder of childhood and the average day-to-day dilemmas and real-life emotions of children with siblings. Wonderful books to read aloud that provide an opportunity for discussion among parents and children.—Lara Chauvin

Pajama Press is pleased to announce that Nat the Cat Can Sleep Like That, written by Victoria Allenby and illustrated by Tara Anderson, has won the 2014 Preschool Reads Award.

Developed by Wee Read Guelph, Wellington, and Dufferin County, the Preschool Reads program is a reader’s choice award for young children who listen to a shortlist of four titles and vote for their favourite. This year’s shortlist also included:

Nat the Cat Can Sleep Like That is featured in the January/February 2014 issue of Chirp Magazine, the theme of which is “Time for Bed!” Reviewers have also been charmed by this determinedly dozy feline. Here’s what some of them had to say:

“…Allenby and Anderson have captured a cat any young ailurophile will recognize. The simple rhyming text listing the odd (yet realistic) places Nat can sleep during the daytime and all the silly mischief he and his black-and-white kitten sidekick get up to at night will hook young listeners. The watercolor, acrylic and pencil illustrations of floppy, goggle-eyed Nat and his buddy are a just-right pairing.

“In Nat the Cat Can Sleep Like That, author Victoria Allenby’s poetic text and illustrator Tara Anderson’s whimsical art lulls kids – and kitten – to sleep, making it a lovely bedtime read

But it’s more than a bedtime story: it’s a tale of friendship and acceptance. It’s a story in which kids safely explore relational differences and boundaries through the eyes of cats.

…. Parents and teachers will love Allenby’s word play. Her use of repetition and alliteration is calming and her steady cadence is mesmerizing. Nat the Cat Can Sleep Like That is a story of love and limits… and it might just induce a good night’s sleep.”—The National Reading Campaign

“The rhyming word choice is spare in this delightful picture book for younger children, and deliberately so….Tara Anderson’s illustrations are whimsical and fun… Although the illustrations complement the story, they also tell a story of their own, encouraging children, and their grownups, to read the story again and again.

The mood of the book is playful, easily appealing to a preschool audience. Victoria Allenby’s title is a perfect choice for bedtime and storytimes for young children. Highly Recommended.”—CM Magazine ****/4

“This rhyming story has a playful tone, great for reading aloud to preschoolers. The adorable illustrations by Tara Anderson, rendered primarily in pencil crayon, will appeal to the target audience a great deal, and may even inspire them to try their hand at similar drawings. The onomatopoeia in words like “whoosh,” “shush” and “hush” further add to the light heartedness of the book, and will be fun for kids to imitate.”—Resource Links

Tweezle into Everything is “a wonderful family read”—Bookish Notions

“Not only will the message in this cute story win over the youngsters in your life, but the  illustrations are sure to capture their attention and imaginations. Bursting with colour and movement, the pictures of the monster family are a lot of fun. I love how bright they are!

…Tweezle into Everything is a wonderful family read, especially for young children who may be struggling with either being the youngest, or having a young sibling who always seems to be getting into everything.”

Library of Clean Reads can relate to Nat the Cat 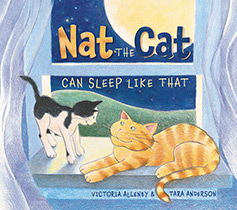 “This book was a lot of fun to read with its rhythmic verses and playful language. It follows a day in the life of Nat the Cat who loves to sleep in the day no matter what is happening around him. But when night falls, Nat comes alive! We have a cat so we can relate to Nat’s behavior. AND my kids are the same too! They come alive at night when it’s time for bedtime…With engaging words and lively pictures, this book will greatly appeal to cat lovers of all ages.”

Posted on January 3rd, 2014 by pajamapress

“…a simple and poignant story.  Told in a clear, clean prose, the story is about Kato who goes to fetch water and do chores, but also finds something special to give the aid worker that gives out new shoes.

The art is digital.  It has a mixed media collage look to it…There are several terrific perspective spreads…I would use this with preschoolers to second graders, because of the simple storyline, but older children could be introduced to a study on Uganda with this title.”