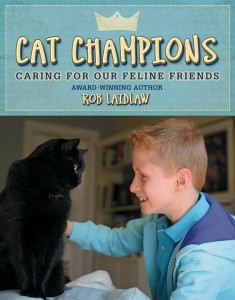 “Cat lovers around the world will celebrate this well-written nonfiction selection. Animal advocate Rob Laidlaw, weaves interesting facts, photographs, and profiles of the real cat champions. All around the globe, there are children and teens who volunteer and care for abandoned cats. For example, some of the cat champions include the students of Clay High and Dryden High School who built cat shelters to help feral cats during the cold winter months. In six chapters, Laidlaw includes information about various cat breeds, cat adoption, foster parenting, and fundraising efforts. The back matter includes a cat lover’s pledge, additional resources, glossary, and index. This informative book celebrates our feline friends while also raising awareness about kids who make a difference.”

Congratulations to our authors and illustrators whose work has been honoured!

Pajama press is proud to announce that Cat Champions: Caring for our Feline Friends   by Rob Laidlaw has been nominated for the 2014/2015 Hackmatack Children’s Choice Book Award.

This award is an annual reading program that encourages literacy and the love of reading among children in grades 4, 5, and 6 in Atlantic Canada. The companion book to Cat Champions, No Shelter Here: Making the World a Kinder Place for Dogs, is nominated for the 2013/2014 award; those results will be announced later this spring. Learn more at www.hackmatack.ca.

Congratulations to Rob and to all of the nominated authors!

“…the kids’ actions should inspire readers to get involved with rescue efforts in their own communities. This title would be useful for its information on young people and their determination to protect cats everywhere.”—School Library Journal

“Written in a clear unpreachy style and brimming with lovely full-colour photos, this is an ideal volume for any young cat lover…”—Quill & Quire

“…the book’s centerpiece is the “cat champions,” or young people (some eight or nine years old) who have gone above and beyond to make life better for felines.…The list of organizations where kids can learn about ways they can help is extensive and useful.”—Booklist

“[A] book that will empower youth to help homeless cats… Attractive sidebars contain tidbits of information that will be of interest to cat lovers…Highly Recommended.”—CM Magazine ****/4

“The information is easily accessible and the stories are engaging and heart-warming… This is a wonderful book for any animal lover.”—Resource Links

“Gr 3-6–Laidlaw takes children’s love of cats and combines it with their interest in making a difference by introducing young people who are working to save these animals. The book begins with a chapter about cats in general–their history, attributes, breeds, and cat shows. He then describes “Cat Champions” in the United States and Canada and their efforts to help abandoned, injured, or homeless felines: a girl who helps trap and neuter cats in a colony near her home, high school students who construct outdoor shelters for feral cats, and others….[T]he kids’ actions should inspire readers to get involved with rescue efforts in their own communities. This title would be useful for its information on young people and their determination to protect cats everywhere.”
—Susan E. Murray, formerly at Glendale Public Library, AZ

Posted on February 18th, 2014 by pajamapress

Rob Laidlaw’s Cat Champions: Caring for our Feline Friends is getting attention on both sides of the border as the US publication date approaches. Here are some of the things reviewers have had to say:

“Far from being tragic,…the book offers a powerful message: that young people can make a difference…As a library worker, I want to put this book in the hands of every child who cares deeply about cats. Perhaps another “Cat Champion” will join the effort to make the world a better place for cats.”—Cynthia Parkhill, Information Professional

“A perfect balance between the sometimes tough ‘real-life’ aspects of animals’ lives, and the enjoyable and positive aspects of their lives, whether they be owned, rescued or feral. ‘Cat Champions: Caring for Our Feline Friends’ promises to be as awesome as [Rob Laidlaw’s] previous books.”—CatInformation.net

Click the links above to read the full reviews.

Posted on February 15th, 2014 by pajamapress

“Here’s a book for cat lovers and those who want to know more about caring for furry friends. Laidlaw offers a slew of information…about cats: history, breeds, care, and habits of both domesticated and feral cats. But the book’s centerpiece is the “cat champions,” or young people (some eight or nine years old) who have gone above and beyond to make life better for felines. Among them are a girl who started Blankets Fur Beasties, which collects blankets, quilts, towels, and other supplies for shelters; a seven-year-old boy, who volunteers for animal protection in China, feeding feral cats; and a family, led by their teen daughter who specializes in fostering cats…The list of organizations where kids can learn about ways they can help is extensive and useful.”

The Year’s Best with Resource Links

Posted on February 7th, 2014 by pajamapress

Resource Links magazine published its list of “The Year’s Best” books  for 2013 this week. Five Pajama Press books made the list:

Nix Minus One by Jill MacLean

The Stowaways by Meghan Marentette

Hoogie in the Middle by Stephanie McLellan and Dean Griffiths

Congratulations to our authors and illustrator whose books were recognized.