“…Quebec author, visual artist and publisher Angèle Delaunois takes the reader across the world to witness the importance of water to the children of different countries….Canada is represented by two spreads, one from Quebec and one from Nunavut, both which speak in terms of what is most familiar to young Canadian readers….

While other texts and illustrations will be familiar or at least obvious such as the Russian child of a fishing village and the rain experienced by an urban child in Germany, many spreads will rouse thoughtful discussions of unfamiliar depictions of water….

The artwork of Montreal animator, graphic artist and illustrator Gérard Frischeteau rings with authenticity, depicting each global child in both personal and expansive landscapes, often providing details about daily life and family….

In fact, ‘Water is Life’ is a special touch in Water’s Children. On watermarks adorning each spread, the term ‘water is life’ is translated into a corresponding language, including French, Inuktitut, Catalan, German, Portuguese, Tamil, Arabic and Wolof with a final listing of all regions and languages represented in the book.

I know I’ve listed the reading audience as 4 to 8 years of age but don’t follow that. Water’s Children’s audience should read “All ages” or “Everyone” because it is an extraordinarily inspirational examination of the importance of water throughout the world. You can save it for World Water Day (March 22) but I recommend it for this weekend’s Earth Day (April 22) and anytime meaningful attention be paid to a global resource i.e., always.”

“What a hopeful, gladsome journey!” Orange Marmalade Books declares of The Wolves Return 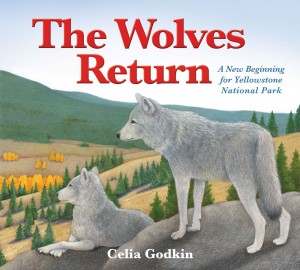 “[T]he complex, interactive webs which rely on biodiversity are critical to a healthy planet and to our health as humans….

By hunting [grey] wolves to the point of near-extinction settlers unwittingly disturbed the timeworn balance that had allowed all sorts of plants, animals and waterways to flourish. This lovely book shows how each piece began to be renewed as wolves were re-introduced to Yellowstone beginning in 1995.

Each turn of the page shows another glory of nature able to perform again its vivid song, as the positive, un-domino effect takes place. What a hopeful, gladsome journey! Share this with children ages 4 and up.”

“[T]ry introducing little ones to [poetry] with this picture book…The unique illustrations in All the World a Poem are paper collage art, which adds to the overall artistic aesthetic.”
—Joanne Sallay

“…Good Morning, Grumple is a sweet story about a sleepy fox-like creature ­­- who does not want to get up in the morning – and the patient mother who knows exactly what to do.

Author Victoria Allenby – whose debut picture books, Nat the Cat Can Sleep Like That, won the 2014 Preschool Reads Award – succeeds once again in crafting a charming tale befitting the kindie set. Just as the mother in Good Morning, Grumple tries different tactics to awaken her sleepy-headed child, Allenby incorporates different narrative styles, moving deftly from rhyming couplets to sing-song lyrics to abrupt variances in rhythm that allow for recalibration and reflection….

The mixed media and paper-collage illustrations by four-time Governor General’s Literary Award nominee Manon Gauthier are rustic in appearance, but convey great depths of emotion….The child-like quality of Gauthier’s work matches the story’s sweet and tender tone, while the gradual increase in text size as the book progresses is a great representation of the experience of waking up and embracing the morning….”
—Sarah Sorensen 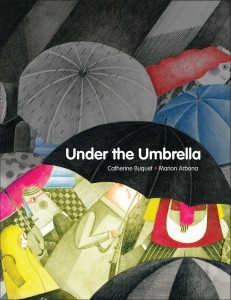 “…Artistic, unusual drawings of this sullen man perfectly capture his dark mood and the dark day, until a little boy changes his perspective in an unexpected way.”

“[A] unique title that explores the vital importance of water…Written in poetic form, each two-page spread features a child from a different country who was invited by the author to share what water means to them in their life and surroundings. Each does so in their own language, and their (translated) answers are inspiring….The illustrations are gorgeous and tailored to represent a familiar depiction of each of the twelve narrators’ homeland….

This title is suitable for older toddlers through to primary school students and would be a wonderful addition to a personal, school, or public library collection. It reads like a crossover between a picture book, poetry, and a non-fiction title. Highly recommended.”

Posted on April 4th, 2017 by pajamapress

“…Because the book is beautifully illustrated in vibrant colours, readers can vividly see how children live around the world. Gérard Frischeteau, a well-known animator, commercial artist and illustrator from Montreal, QC, is billed as a perfectionist, and it shows in the authenticity of the children and their environments on each double-page spread….Both the text and the illustrations serve to unify the world in a common theme, something that isn’t often done well in children’s books, but is done in both a matter of fact and sensitive way by Delaunois and Frischeteau.

The text is poetic and would be wonderful read-aloud with, by and for children to demonstrate that water doesn’t just flow out of a tap. Water is often taken for granted, and Water’s Children is a unique way to introduce the importance of water throughout the world. Set to be published on Earth Day 2017, it is destined to become a new classic…

The final page of Water’s Children teaches the reader the languages and regions covered in the book, and the endpapers are swirling blues, mauves and whites of water, reminding the reader of the beauty, necessity and power of water in our world.