Posted on November 21st, 2017 by pajamapress

Pajama Press is excited to announce that Adrift at Sea: A Vietnamese Boy’s Story of Survival by author Marsha Forchuk Skyrpuch with Tuan Ho, and illustrator Brian Deines is the recipient of the Children’s Literature Roundtables of Canada 2017 Information Book Award Honour Book.

The Information Book Award “is given annually to a book that arouses interest, stimulates curiosity, captures the imagination, and fosters concern for the world around us. The award’s aim is to recognize excellence in Canadian publishing of children’s nonfiction.” Pajama Press previously won the 2015 Information Book Award for A Brush Full of Colour: the World of Ted Harrison by Margriet Ruurs and Katherine Gibson.

Pajama Press extends our congratulations to Marsha Forchuk Skrypuch, Tuan Ho, and Brian Deines. Our sincerest thanks go to the Children’s Literature Roundtables of Canada for championing and supporting the development of quality nonfiction in Canadian children’s publishing.

Posted on November 15th, 2017 by pajamapress 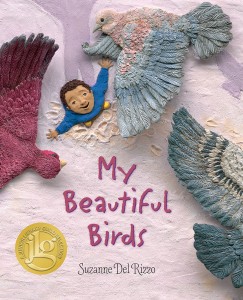 Pajama Press is excited to announce that My Beautiful Birds by author-illustrator Suzanne Del Rizzo is the winner of the 2017 Malka Penn Award for Human Rights in Children’s Literature.

The Malka Penn Award “is given annually to the author of an outstanding children’s book addressing human rights issues or themes, such as discrimination, equity, poverty, justice, war, peace, slavery or freedom.”

Pajama Press extends our congratulations to Suzanne Del Rizzo. Our sincerest thanks go to the Thomas J. Dodd Research Center for their commitment to human rights education and their support of children’s literature.