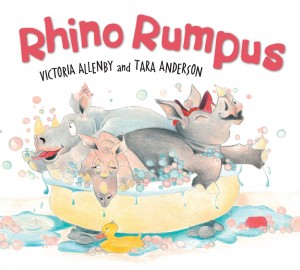 Victoria Allenby and Tara Anderson, the author-illustrator duo who brought us Nat the Cat Can Sleep Like That (Pajama Press, 2013), have returned with another picture book for our littlest ones, this time focusing on the sibling antics of three rhinos as their mother attempts to bring them to some degree of harmony….

The text is perfect for toddlers who will delight in its simplicity and sounds, while those children who are just learning to read will be pleased to test themselves on the easy-to-read rhyming lines and repetition of numbers (e.g., One little rhino…, Two little rhinos…, Three little rhinos…)….Similarly, Tara Anderson, who dedicates the book to her own little one, animates the text with her coloured pencil illustrations that convey exuberance, joy, mischief and affection with each stroke….

Rhino Rumpus will undoubtedly become the go-to book for families with young ones who get into squabbles, both for parents who need to recognize that children learn through play, even boisterous play, and for children who need to see that parental love is a gift that should not be overlooked, even if it does need a rest occasionally.