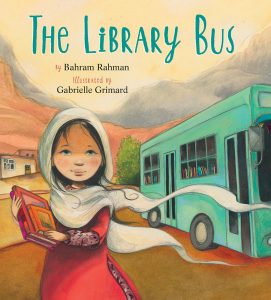 “Illustrations in warm-hued watercolors depict the buildings in the old city nestled in the mountains ‘like the embroidered scarfs in the Grand Bazaar,’ which contrasts with the dusty tents of the camp. The girls’ individualized faces and emotions will establish a bond with children everywhere as Rahman celebrates the brave and resourceful Afghani women teachers from his childhood who found creative ways to educate girls.”
—Lolly Gepson

Read the full review in the October 1, 2020 issue of Booklist

“Grimard’s illustrations pair well with Rahman’s words, from the sun rising over the mountains in the morning against an atmospheric sky to the dusty camp area with tents labeled UNHCR. Pari, her mom, and many girls cover their hair. In the backmatter, the author, an Afghan refugee himself now living in Canada, offers a personal message, which is accompanied by a brief note about refugee camps.

An inspiring story that conveys the power of education—paying it forward and meeting avid readers where they are.”

“The majority of Canadian children – though shamefully not all – can take for granted the availability of books at home or in schools and local libraries. Two new picture books, both told from the perspective of children, are set in war-ravaged countries where access to books is anything but a given….The Library Bus introduces readers to the brave women in contemporary Afghanistan who run mobile schools and libraries to teach young girls and provide them with reading and writing materials….

Bahram Rahman’s The Library Bus is inspired by growing up in Afghanistan and by the children he met during visits to orphanages and camps in Kabul….

The dangers and obstacles that still exist for girls getting an education in Afghanistan are not emphasized; Rahman instead refers back to the education of Pari’s mother by her father, which had to be conducted in utter secrecy. In the afterword, the author mentions the inspiration he drew from the real-life children he met. Gabrielle Grimard’s characteristically warm style and her animated representation of Pari and the other children beautifully brings to life the vitality and potential of the girls in the book.”