Home > Books > The Castle in the Sea Reviews

The Castle in the Sea Reviews 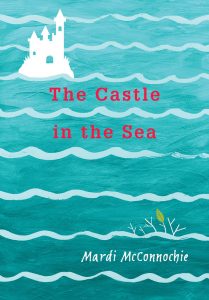 “Readers will be engrossed in this action-packed adventure story and will eagerly await the next installment. VERDICT A satisfying, high-stakes sequel. Recommended for middle grade collections that own the first novel.”
—Marissa Lieberman, East Orange Public Library, NJ

“Will and Annalie continue the search for their dad in the middle installment of an Australian eco-thriller trilogy (The Flooded Earth, 2018)….While they quest for Spinner and his research into geo-engineering the Flood, the children avoid the wicked forces of the Admiralty and survive all manner of adventures: a storm at sea, stranding on a deserted island, capture by pirates, arrest by immigration officers, and having to eat some pretty gross bugs….A post-apocalyptic disaster story with the cozy feel of Swallows and Amazons.”

“As in the first book, this sequel offers commentary on the refugee crisis, often using humor to alleviate the tense material, but McConnochie also delivers higher stakes, daring escapes, wild storms, and pirate battles in a second adventure sure to please young thrill-seekers.”
— Elizabeth Konkel

“This equally fast-paced, action-driven sequel to The Flooded Earth (rev. 3/19), set in a post-climate-change society, begins three weeks after twins Will and Annalie, Essie, Pod, and parrot Graham escaped Little Lang Lang Island…McConnochie expands the setting of her post-Flood world, sending the characters to distant lands and introducing new cultures…The book also begins to explore the scientific and ethical challenges of climate-altering technology, leaving plenty of questions to be resolved in the next volume.”
—Sarah Rettger

“The Castle in the Sea continues the highly suspenseful adventure, strong characterization, and intriguing speculation on a very real-seeming future that made The Flooded Earth so satisfying. The endless variety of post-Flood nations, from the northern oasis of Norlind to the squalor of Brundisi to the crime-infested anarchy of the pirate island Dasto Puri, are described in fascinating detail, rendering them both strange and familiar. Parallels with our contemporary world are poignant, from the callous indifference to climate refugees to the materialistic world of Essie’s rich parents, yet the book is never moralizing, instead relying on constant action to propel it forward….

But again, it is the incredible and thrilling pace of the story, and the almost effortless flow for the reader, that make this book as likeable and compelling as it is profound and thought-provoking….The final installment in the trilogy cannot come too soon!

“Rating: E…McConnochie showcases the action filled chapters with two points of view set forty years after a massive flood that destroys most of the earth’s surface. One focuses on the crew of the Sunfish ship and the other is on the protagonist Will and his friend Essie who fall off the ship. Even though Will and Annalie are in a fight for their lives to find their father against pirates, Admiralty, castles, rocks and more, the sea, it’s vastness, mightiness and its glory is the main focus. It is an expansive depth that carries secrets and messages just like the crew and that draw parallels to impending issues affecting the world and its future from migration and climate concerns.

“This is a story of resilience and determination as the four children use the resources and skills they have as they deal with new and often frightening situations. The terrible strength of water arises more than once here, and they learn to look for solutions that are not always the obvious ones. I enjoyed seeing the characters develop further. Pod comes out of his shell and Essie shows new determination. Annalie surprises the others with the things she is able to stay calm in the face of. Looking forward to the third book.”

“There was a lot of science in this book, but it was different from the typical science themed stories for kids. They didn’t do experiments or use technology. The kids had to solve their problems using the things they found in nature. Since they were on a boat, there were many nautical problems, such as sailing without any wind and navigating through a storm. This is a great way to teach kids how to solve their problems anywhere. I really enjoyed this story!”