Home > Books > Once Upon a Line Reviews

Once Upon a Line Reviews 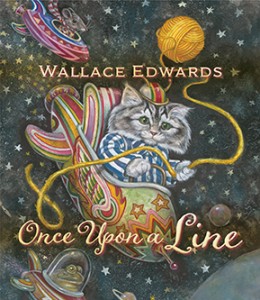 “Great-Uncle George was a magician whose “enchanted pen” has created an array of fancifully surreal illustrations, each begun with the same-shaped pen stroke and each accompanied by a brief story starter. Great-Uncle George’s mustachioed portrait appears next to a succinct history of the fictional magician and his special pen: “With this pen he would draw an ordinary line. That line turned into a painting. He drew the line many times and painted hundreds of paintings, but all that remains are the ones that you see in this book.” Readers are then invited to find that line—duplicated on the first page—and to “finish each story.” The colorful, absurd, detailed illustrations feature a fantastical array of characters—many of them anthropomorphic animals—in an intriguing style that defies easy classification. Each absorbing illustration includes a sentence or two, always beginning with the titular “Once upon a line” and ending with ellipses….The artwork is captivating, finding the pen stroke is challenging, and the text will spark some animated conversation. (Picture book. 4-9)”

“This interactive, imaginative book opens with the drawing of a single line, used in each illustration that follows. Edwards charges the reader to identify that line in each of the completed illustrations. (It’s a tough game, but don’t worry, there is an answer sheet at the back.) Readers are then challenged to complete the story that each page introduces. Sometimes the prompt is an action (“Mr. Wolf was about to give up searching for his pet duck when…”), other times a rationale (“He preferred to write his own music because…”). This variation will keep readers on their toes, and the colorful illustrations created with watercolor, pencil, and gouache will continually surprise with unexpected depictions: an elephant in an umbrella, dinosaurs popping out of a king’s balloons, a dog whose reflection is a cat. This is a charming reminder of the importance of a single line, and the fun of the creative process. Pair with Christopher Myers’ My Pen (2015) for a different take on the power of the pen.”
—Edie Ching

“The cover asks, ‘Where do stories come from? How do ideas begin?’ and the title answers, ‘Once upon a line.’ The book begins with a Harris Burdick–like framing device describing a folder of pictures found inside an old steamer trunk. Readers are invited to take the paintings and a humorous beginning line to develop original stories. Unlike Van Allsburg’s mysterious, moody illustrations, Edwards’s are more fanciful. Rendered in watercolor, pencil, and gouache, most of the pictures depict animals in strange situations. Many of the images are visual jokes, such as a chicken chasing an egg with legs, accompanied by the text ‘Once upon a line, there was a great race. No one knew who would come first until the fluffy one began to….’ Each full-page illustration is boxed by a white border on three, not four, sides, leaving even the pictures open-ended. By themselves, the funny pictures will amuse readers; going further, the situations should inspire creative writing. Edwards adds a puzzle element by hiding the same drawn line in each picture. An answer key is included at the end of the book….”

“The latest visual feast from Wallace Edwards is designed to spur the imagination of young readers (and older ones, too). Each page features an image and “Once upon a line,” followed by the beginnings of a story (“there was a great race. No one knew who would come first until the fluffy one began to…”). It’s up to readers to determine what comes next, though Wallace provides many possibilities in his detailed illustrations packed with flora and fauna (and a single pen stroke repeated in each image, which Wallace challenges us to spot). From a knight riding an octopus to a gaggle of laughing alligators, there’s no shortage of silliness here to inspire raucous bedtime yarns.”
—Dory Cerny

“Join the magic pen on a journey through the imagination and its stories.

Wallace Edwards’ Once Upon a Line is the ultimate springboard to story writing for individual readers or for whole class endeavours.

Starter sentences combined with beautifully illustrated colour pictures of a possible story line are set out on each page, where the only limit is the individual’s imagination. This is a fabulous tool for teaching creative writing, from brainstorming through process writing to illustration and publication.

Highly recommended for classroom libraries, creative writing classes, rainy afternoon entertainment and more. This book whets the creative mind’s appetite and begs its satisfaction. Each illustration can tell a thousand stories if the mind allows it. A masterpiece!”

“…Edwards’ work is an educator’s delight as it offers countless instructional opportunities in storytelling, creative writing, and visual arts. Children will unquestionably enjoy the interactive nature of the book and how it openly invites them to make the stories their own. Perhaps most importantly, Once Upon a Line allows children to recognize that even the grandest of ideas often begins from something rather small.

A wonderful addition to any classroom, school or home library, Once Upon a Line will most certainly appeal to a wide audience of readers for years to come.

“Giant circus frogs eat their trainers, robots ice-skate on frozen ponds, a dinosaur hatches out of a balloon held by a king: we were already in love with this book even before the high concept set in. And that high concept is how the author’s uncle left a trunk full of his drawings, all of which he started by sketching the same squiggly line. You have to find the line in the picture and finish his story. The test of any high-concept book is the execution and Edwards totally pulls it off, creating a sort of If On A Winter’s Night A Traveller for the under-10 set. I suspect this book will live near the top of our favourites pile for quite some time.”

This is a great book for anyone with a wild imagination. On each page Wallace draws the reader into both the illustration and the words. Readers are challenged to find the ‘magic line’ in each picture. In most cases, the story is different, not always exactly what is shown in the picture. For example, we get a dandy rat who loves his ‘brand new ultra-modern house,’ a gleaming white toilet sitting among flowers. The words continue, ‘“I have never had such a beautiful home before,”’ he said. Just then, a little bird said…‘This sentence could lead anywhere, and is an invitation to go somewhere new each time you read it.’

“Wallace Edwards’ sophisticated watercolour and coloured pencil illustrations demand close inspection.  Many visual jokes are on display, like a foppish mouse showing off his new ‘ultra-modern’ toilet house, an armoured knight heading out to the battlefield atop an octopus, and a dinosaur hatching from a balloon bouquet. In Edwards’ trademark style, there are several hidden objects to discover in every drawing, including George’s fountain pen and the recurring pen stroke that launches each fanciful new ‘storyline.’ Fire up your imagination and journey to the inspired worlds that are created in Once Upon a Line.”

“With Once Upon a Line, Wallace Edwards has catapulted himself and his books to the status of must-haves for any home, school or public library. The USA may have Chris Van Allsburg and most notably The Mysteries of Harris Burdick, but teachers will now be scrambling to use Once Upon a Line instead as the go-to book for story-starters and creative writing projects based on intriguingly unique illustrations that get the creative juices flowing.

…Once Upon a Line is so rich in its visual effects and textual texture that it deserves all the golden stars on its cover and more.”

“Once upon a Line is like no other book I have ever read. There really isn’t a story written, but instead you need to use your own imagination to finish off a story. Each page is a different picture and story for you to make up. They said the pictures were from a Great-Uncle George, who was a magician and had a magic pen. They say that every picture starts with a line and you need to find the line in each picture, as well as find the magic pen.

Once upon a Line was a great book. I liked looking for the starting line and magic pen on every page. I loved sitting with my mom and sister and we each took turns continuing the story for every picture. Some stories were easy to continue and others were harder. The illustrations were very detailed, colorful and some where really funny. My favorite page was the prince who dreamed in color and dreamed up a dragon. It was really fun making up your own story and using your imagination.”

“What did you like about the book?   This book consists of a series of colorful and whimsical illustrations accompanied by a few lines of text that serve as story starters. All begin with ‘Once Upon a Line’ and most involve animals. For instance one painting depicts a pig in a suit atop a very large fish: ‘Once upon a line, a fisherman tried out his new fishing pole. He was admiring the fine workmanship when suddenly…’ The book begins by saying that the paintings were found in an old trunk belonging to a magician and that ‘each picture starts with the same pen line.’ Most readers will find it very difficult to find the same pen line in each drawing, but there is an answer key at the end. This is a book that would be useful for aspiring writers.

Anything you didn’t like about it? / To whom would you recommend this book?     This would be a good book to use with a creative writing class. Children who like to write stories will enjoy the ‘story starters.’ Pair it with The Mysteries of Harris Burdick by Chris Van Allsburg.

Who should buy this book? Public libraries”