Home > Books > On the Line Reviews

On the Line Reviews

“To be a team player, sometimes you need to think creatively. 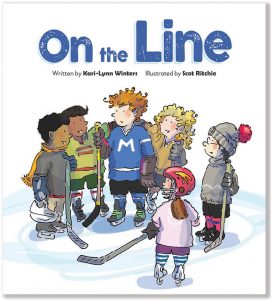 Young Jackson Moore comes from a family of hockey players who swap goal stories at dinner. Grandpa tells Jackson, “You’ve got Moore in your blood. You’ll be great!” But Jackson isn’t so sure, and his first efforts leave him flat on the ice. The other kids think he’s too big and uncoordinated for their team. But they have problems of their own… illustrations portray a diverse cast of characters, from the team to the audience in the stands. Bright swathes of greens and blues are punctuated by oranges and yellows, powering a vibrant, eye-catching palette…. an encouraging story for young readers who struggle with shyness and anxiety. An author’s note offers additional insight to the origin of Jackson’s story.

Believe in yourself, trust your talents, and find resilience in stories.”

“On the Line tells the story of Jackson Moore, a kid who comes from a family of hockey stars. Jackson is expected to follow in his family’s footsteps, but, as it turns out, he is “a potato on skates”. Jackson hopes to help the team another way, and he comes up with a game plan they can follow. This also fails. Jackson then sets his sights on getting his team the proper equipment, without which they will be unable to play in the tournament. Jackson succeeds in this plan and is a hero after all, just not in the way everyone was expecting. A note on team stewardship at the end hammers home that there are many ways to be part of a team….

On the Line shows that there is more to sport than athletics.”

“The simple text and lively illustrations in this book celebrate being a team player, thinking outside the box, and the true meaning of stewardship. Jackson Moore comes from a family of hockey heroes.  His grandpa was an all-star and taught him how to make a game plan, hold a stick, and pass a puck. Jackson is not so sure about his hockey skills, he feels like a potato on skates and even his teammates question if he is a Moore due to his lack of skills on the ice. Jackson’s grandpa tells him he is good at making game plans and he gets to work on figuring out the team’s problem: not having the proper equipment to play in their upcoming Winterfest Tournament.

A great read aloud for the introduction of being part of a team, reinforcing perseverance, believing in oneself, and valuing everyone’s talents.  This would be nice for coaches to share with their elementary school teams.”

“On the surface this is a tale of a young hockey player finding his place, but it is so much more than that. The central character is Jackson Moore, a boy that lives in a small town where hockey is an important part of the community. Several members of his family have been players that have been great assets to their team, described as hockey heroes. Everyone seems to be looking for Jackson to follow in their footsteps, but he has doubts. Mostly he keeps his doubts to himself while wondering what will happen if he doesn’t live up to these expectations.

The illustrations add important elements to the story, showing diversity in the community and on the team, and the level of ingenuity the kids and their parents had used to come up with workarounds on equipment.”

“Author Kari-Lynn Winters talks about growing up in a hockey-loving family in a hockey-loving town but being an OK hockey player: “I wasn’t the best skater. I rarely scored goals and I got even fewer assists.” What Winters came to realize, however, was that she was a team steward or leader, helping her team on and off the ice.

This a great picture book to show kids that there are more important things than scoring goals – like trying hard, being a great team player and never giving up.”

“This story gave me some very Mighty Ducks vibes and being a huge fan of the movies and the new series, I really enjoyed this book. I grew up in a hockey family but neither of my kids care to play the sport so at times hockey stories can be a tough sell for us. I know so many hockey fans who will really enjoy this story and so many parents who will love the aspect of community and giving back that Kari-Lynn Winters has built into the text. With the hockey community acknowledging the ways that teams are boosting their communities, it’s a bonus to have a story to help them along. I love that we are seeing stories about kindness and leadership off the ice as well as on the ice. We need to show readers that being a team player and a team leader is more than how they play, it’s how they create opportunities and give back off the ice too.

Scot Richie’s illustrations are colourful and filled with excellent hockey action. I love all of the team members in their various iterations of equipment, most not appropriate for playing hockey. He creates a beautiful community throughout the story that readers will love.”

“On The Line, Kari-Lynn Winters, illustrated by Scot Ritchie, is the newly released story of Jackson, who comes from a long line of hockey heroes. Jackson’s not so sure he can live up to his family’s expectations. He feels like a potato on skates. But maybe his skills are not in skating but planning and organizing. When his team needs a plan, Jackson saves the day. A good story not just for hockey fans but to discuss each person’s different strengths and skills.”

“Love that being the best at a sport isn’t what makes you part of the team! Supporting your team and continuing to preserver and show up is what makes you a valuable member of any team. I really enjoyed this story. Very short and sweet.”

“For many Canadian children, hockey is a rite of passage and a sport to be explored. Jackson Moore is the child of hockey legends. Unfortunately, he is not a child likely to follow in those footsteps. He is often reminded that hockey is a family ‘thing’; he is sure to be great. Jackson is not convinced. He wants to meet the expectations, but he is skeptical.

When stepping out onto the ice proves he is ‘a potato on skates’, Jackson must find another way to be a team player. All the practice in the world is not going to solve the problems that Jackson has with playing the family game. His Grandpa is the one who sets him on another course. He tells Jackson that he is ‘good at making game plans’. Is that the answer to Jackson being a part of a hockey team?”