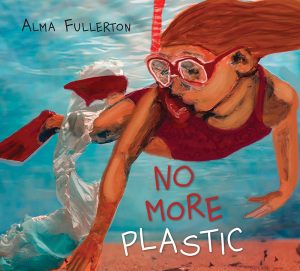 “Angered by the death of a whale, beached on the ocean shore she loves, Isley finds a constructive response….Like Isley with her construction, author/illustrator Fullerton has created her illustrations from ‘repurposed plastic, sand, and moss.’ Among the best of the recent books about ocean plastic thanks to its positive approach and practical suggestions included at the end, this title would work well as a group read-aloud….A gentle, effective presentation of an environmental disaster.”

“Isley lives near the ocean. One day she awakes to find a dead whale on her beach. Isley is sad then angry when it is announced that the whale died of starvation because it had so much plastic in its stomach. Isley decides to get rid of plastic in her community once and for all. This is a very straightforward book with a clear environmental message about how damaging plastic is to our environment. Isley’s earnest persistence to get rid of plastic is admirable.”

“Alma Fullerton makes a poignant plea in No More Plastic, the story of a girl who takes a firm stand against pollution. When Isley wakes up one morning to sounds of distress, she races to the shore where a beached right whale has died, the victim of the plastic that filled its stomach.
Deeply saddened by the senseless loss, Isley is also angry and becomes determined to help keep the ocean that she loves clean and safe for all the creatures that live there. She convinces her family to say no to plastic.
She makes signs and writes letters. And when the people around her start to forget about how important these efforts are, Isley makes a dramatic statement that reminds her family, friends and neighbours that they must keep working diligently towards the goal of a world without plastic.
In prose that is precise and measured, Fullerton conveys Isley’s anguish, frustration and resolve.”

“No More Plastic is an inspiring story of perseverance with an important lesson that one little person can make a big difference. The intriguing illustrations—diorama art made out of plastic waste, sand, and moss—help tell the story and drive home the message. The author’s note at the end includes several ideas of things kids can do to make a difference, including writing letters to decision-makers to demand change—a great rainy-day activity!”

“I really enjoyed the use of diorama art made from plastic waste by the illustrator. It really brought the book full circle and shows how it is up to us to change and save our world. Isley is in all of us.”

“I really like that this book is about helping animals and stopping pollution. I hope this helps people to make better choices… The illustrations in this fun picture book were made from plastic waste, and I found that amazing. I recommend this book. I read it multiple times and noticed new things in the illustrations each time!”

A Kids Book A Day

“Isley loves everything about the ocean near her home until one day when a dead whale washes up on the beach.  When she learns that the whale starved to death because its stomach was filled with plastic, she becomes angry.  Turning her anger into action, Isley begins a campaign in her community to stop using plastic bags, straws, and other products.  At first people are enthusiastic, but eventually the convenience of plastic causes them to backslide.  Isley begins collecting the plastic she finds on the beach and uses it to create a giant whale sculpture.  The whale serves as a reminder to people in the community, who begin to make bigger changes like banning plastic grocery bags and installing filling stations for water bottles.  Includes an author’s note and a list of ideas for reducing plastics, both locally and globally.”

“No More Plastic is an excellent environmental picture book aimed at children 4 – 7 but is an important read for everyone. Isley loves the ocean but she is devastated when she finds a dead, beached right whale. The magnificent animal died due to plastic filling her stomach. Isley decides to try and stop people from using plastic. She makes signs, speaks to her family and writes politicians and everyone agrees that there is too much plastic. But they all forget about the tragedy with the whale so Isley gathers up all the plastic on the beach for months and makes “a sculpture as big as a whale.” People stop, think and help – from the grocery store banning plastic bags to the school implementing “zero-waste lunch programs” to the town providing filling stations for water bottles. All working toward “the dream of a plastic-free world.”
No More Plastic is an important picture book which delivers a vital message that cannot be ignored any longer. Complementing the text are beautiful illustrations that Fullerton “made using repurposed plastic, sand, and moss.”