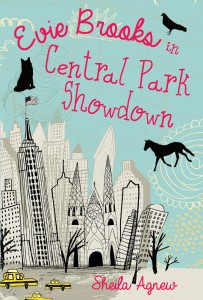 “Evie Brooks in Central Park Showdown is the second in the Evie Brooks series by Sheila Agnew. In the first book, Evie Brooks is Marooned in Manhattan, Evie leaves Ireland to live with her uncle, Scott, after her mother dies. In the sequel, while Evie is still adjusting to living in New York, her father (whom she has never met), sues Scott for custody. The court case looms in the background as Evie embarks on more Manhattan adventures. She accompanies Scott, who is a vet, to the Central Park Zoo, where he has some challenging patients, including a pregnant alpaca and an ailing red panda. At school she is chided for not talking like an American, and she starts failing math. She’s attracted to two boys—the very charming Loucan, an almost-boyfriend with two pretentious dads—and the very compelling Finn, who treats her like a little sister. As she negotiates her way through school, friends and animal emergencies, the fear of being taken away from Scott in the custody battle gradually takes over her life, and she must call on all her resources to fight for what she wants.

This is a funny, engaging book that celebrates the quirky splendour of life in New York as seen through the eyes of a very smart thirteen-year-old….”

“This novel will definitely appeal to young female readers who love animals. They will be able to relate to Evie’s everyday issues at school and at the veterinary clinic, as well as her complicated relationships….Agnew’s novel also deals with different kinds of families. Evie lives with her uncle Scott, but her biological father is suing to get custody. Greg and Finn go back and forth between their divorced parents. Lorcan has two dads….Readers will definitely look forward to the next edition of Edie’s adventures in New York!”

Our meeting lasted exactly forty-three minutes. It was supposed to last an hour so Dr. Blakely must be ripping Michael off. That didn’t bother me. Dr. Blakely spent most of the time talking about himself and discreetly checking his large gold watch. He explains that he had started his career as a highly successful executive in Boston. He was sketchy about what that actually involved. He told us his life’s meaning and purpose: he wanted to find some way to contribute to the world, to be a force for positive change and to make a difference in the lives of children of parents in conflict. He spent years devising the Austin Blakely Co-Parenting method. Yawn. I’m just summing it up here. The method seems to involve ticking off checklists using special colour-coded highlighters. You get a free pack of highlighters when you buy your first Dr. Blakely book and a fifteen percent discount off the second book.

Following Evie Brooks is Marooned in Manhattan, Evie Brooks is back in Evie Brooks in Central Park Showdown. Just when she thinks she has settled into life in Manhattan with her Uncle Michael, her birth father appears. To make matters worse, he is trying to claim custody. Evie is eager to stay with her uncle, but the family court system might have other plans for her. Against the backdrop of a first romantic interest and the new veterinary client, Central Park Zoo, for her uncle’s practice, non-stop drama ensues.

The result is another fun, animal-filled romp through Manhattan. Evie’s colourful friends, quirky veterinarian clinic patients and dramatic court proceedings are all written in a humourous manner. This is not a serious look at custody issues or different types of families. Despite the surface treatment of important material, this series should have a broad appeal. Evie’s blend of serious situations with comical observations is successful and will appeal to many middle school students, particularly girls, due to the female protagonist and romantic storyline.

Young women who like books with animals or are enthusiastic readers of writers like Wendy Mass would be potential readers. Evie Brooks in Central Park Showdown is recommended for school libraries and public libraries, or any collection that serves female middle school readers.

Recommended.”
—Sophia Hunter is a teacher-librarian at Crofton House Junior School in Vancouver, BC.