Bear on the Homefront reviews 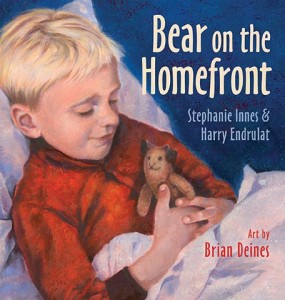 With well-paced storytelling and soft, nostalgic watercolor illustrations, this follow-up to the World War I picture book “A Bear in War” tells another true story of the stuffed bear Teddy, this one set during World War II. Teddy’s owner, Aileen, who as a child had sent Teddy to her father while he was in Europe fighting the Great War, is now a nurse assigned to accompany British children sent to Canada during the bombing of London as they travel by train to their host families.

“A brother and sister evacuated from England during World War II gather strength from a tiny teddy bear.

Child readers, in wartime or not, will give their teddies an extra, grateful squeeze. (afterword) (Picture book. 5-10)”

“In this companion piece to Bear in War (2012), Teddy the stuffed bear provides comfort to two young children who have been evacuated from England to Canada during World War II. In the first book, Teddy is the real-life connection between Aileen Rogers and her father who was fighting on the front lines in World War I. When her father was killed, Teddy was returned to Aileen who kept it as a memento of her late father. Teddy turns up again in this story when Aileen is grown and working as a nurse with English evacuees in Canada. Sensing the uncertainty and loneliness in the two children she is escorting to their temporary home, Aileen gives Teddy to Grace and William for their time away from England. This story offers children a glimpse into what life had to have been like during that time period when youngsters were forced to leave their families so that they might survive the war. The host family has a working farm that the children help with over the five years of the war. When it is time to go back home, the children decide that Teddy needs to return to Aileen as well. The story is touching without any hint of sentimentality. The soft, warm palette of the art is beautifully rendered in oils and adds the perfect touch to this heartwarming story.”
—Joan Kindig, James Madison University, Harrisonburg, VA

“One of the best Canadian picture books of 2012 was A Bear in War. The team of Stephanie Innes, Harry Endrulat, and Brian Deines have collaborated again to bring readers another adventure of the teddy bear that now resides in the Canadian War Museum in Ottawa..Those who enjoyed the first book will find the quality of the sequel equally impressive and the story equally engaging…

…Brian Deines is one of Canada’s foremost illustrators. His heavily textured oil on canvas paintings are a visual treat…Bear on the Homefront is an elegant book that parents and educators will enjoy sharing with young children. Highly Recommended.”

The text and atmospheric oil on canvas illustrations of Brian Deines lend an authenticity to the memories held within Bear on the Homefront.  Teddy has an important story to tell…For his heroic efforts in comforting and giving voice to others when their own words and thoughts probably failed them, Teddy is now safe and treasured at the Canadian War Museum in Ottawa.  So, Bear at the Homefront gives us one more happy ending from a time when there weren’t many.”
–Helen K