Home > Books > Acts of Courage: Laura Secord and the War of 1812 Reviews

Acts of Courage: Laura Secord and the War of 1812 Reviews 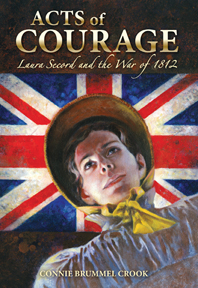 “In this novel, Laura Ingersoll Secord grows from a curious 12-year-old in Massachusetts to a fearless heroine in Upper Canada. The book is based on the true story of an American family trying to prosper during the years leading up to the War of 1812. Laura’s father is a captain in the American militia who travels frequently. After years of fighting rebel discord, he moves his family north to create a new settlement in Upper Canada. Laura marries genteel James Secord, a businessman and Loyalist, who fought to protect Upper Canada. Her journey to heroism and fame begins here. After boldly rescuing James, injured in battle, she overhears American soldiers planning a surprise attack on Canadian troops. Laura embarks on a dangerous 19-mile journey past enemy lines, through snake-filled swamps and rocky terrain, to warn the soldiers. This decision leads to the Canadian victory at the Battle of Beaver Dams. The rich and detailed descriptions of the rigorous lifestyle settlers endured in the early 19th century will enthrall readers… Secord’s story is a great way for students to learn about the politics of the period and the relationship between the United States and Canada during post-Revolutionary War times. Maps of the Ingersolls’ journey to Canada and Laura’s walk are sure to pique students’ interest and encourage further research.”
—Amy Shepherd, St. Anne’s Episcopal School, Middleton, DE

“…this well-researched and -documented historical novel offers young readers a fascinating perspective on the events following the American Revolution and leading up to the War of 1812… The author tells a good story and presents some fascinating and little-known history (including such issues as slavery, economics, and social justice) in an interesting way. A historical note, sources and maps supplement the account. An opportunity for American children to see a little-known war through a rarely considered lens.”

“Pajama Press which celebrates one year in business this spring, has turned to Laura Secord, who risked her life to warn British troops of an American attack, with Acts of Courage: Laura Secord and the War of 1812 by Connie Brummel Crook, author of more than 11 historical fiction for young readers. Publisher Gail Winskill says she wouldn’t normally have sought out a title on the war, but with the anniversary so close she was able to identify the demand in school and library markets. ‘All the educational wholesalers came to us in September asking we had War of 1812 books’, Winskill says. ‘The school system and educational wholesalers are seeing this as an opportunity, and they are building lists of War of 1812 books for the school market.’”

“Laura Secord in Acts of Courage: Laura Secord and the War of 1812, is brought to life as a determined ‘Little Red Riding Hood’, adventurous, curious, robust, generous and courageous, taking risks to help the ones she loves—mainly family and country. Connie Brummel Crook has created an exceptional account of what would or could have been Laura Secord’s life. She depicts vivid landscapes and interiors of the 19thcentury with exquisite imagery…

…In Acts of Courage: Laura Secord and the War of 1812, Connie Brummel Crook creates an awe inspiring infatuation with Laura Secord, through richly descriptive period imagery, plot motion, language and sequences that are fitting for both 19th century and present day readers. The interweaving of both fictitious and real characters is executed seamlessly, with cleverly woven twists and an unexpected conclusion.

A love story, with war, passion, humanity; it is a dynamic and fascinating story that demonstrates the implacable resolve of women in that period. It is something that can be admired by all.”

“Readers of all ages like to learn new things while they are being entertained and will appreciate Crook’s care and skill in painting a detailed, fascinating picture of Laura’s times. Acts of Courage, an accurate, accessible novel, is timely for bicentennial anniversary of the War of 1812”.

“By staying true to Laura’s undertaking while adding an interesting twist (fictional, of course), Connie Brummel Crook has taken this book from biography to historical fiction with an ‘Aha!’ moment or two.

…[N]o subplot or component of the story is gratuitous, each important in explaining and moving the plot to Laura’s climactic walk, probably best described as a combination trudge, plod, wade, slog and creep.  Luckily Connie Brummel Crook’s telling of Laura Secord’s story lacks the toil and anguish of our heroine’s defining moment and instead takes the reader through Laura’s life’s journey to better understand the choices and connections she has made throughout.”
–Helen Kubiw

“Acts of Courage made me want to go dig up more information, which is surely a goal of history writers everywhere – to inspire interest in what really happened.  In that sense, a rousing success!

…to people who think Canadian history is boring – this book will change your mind.”
–Lindsey Carmichael