A Bear in War Reviews 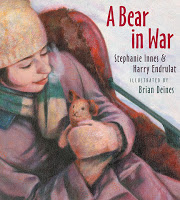 “Aileen was a 10-year-old Canadian whose father fought in Europe during World War I. She had a small teddy bear that she treasured and carried with her everywhere until she sent it to her father in Belgium, where he served as a medic. He carried Teddy with him, just as his daughter had. In fact, Teddy was with him when he died on the battleground. Eventually the bear was returned to Aileen. This tender story is punctuated throughout with newspaper cuttings, photos, medals, and other realia from the time period. The endpapers are old family letters and the illustrations are evocative of a time when life was simpler but perhaps not as easy. The palette is muted and soft, which makes the story seem comfortable and safe…The history, the illustrations, and the story itself combine to make a wonderful testimonial to a family who made the greatest sacrifice for their country in World War I…”
—Joan Kindig, James Madison University, Harrisonburg, VA

“A Bear in War gently introduces young children to war. This true story about Lawrence Browning Rogers’ life is told from Teddy’s perspective. The innocence of Teddy’s voice is deeply comforting and will resonate with its young audience. Co-authors Innes and Endrulat do not shield the reader from the sadness war brings but choose to demonstrate it with tremendous sensitivity. Deines’ exquisite oil paintings beautifully couple the innocence and sensitivity that Innes and Endrulat create. Each illustration is soft in its rendering and also expresses a depth of emotion that moves the reader. Simply put, A Bear in War is a story that parents must read to their children. Highly Recommended.”
—Inderjit Deogun is a poet in Toronto, ON.

“In this book Teddy, a stuffed teddy bear, tells his story from the time he is taken home to a farm in Quebec by his owner ten-year-old Aileen Rogers, through being sent to France in a care package sent to her father, Lawrence Browning Rogers, as he was fighting in the First World War, and his return home alone as Lieutenant Rogers died at the Battle of Passchendaele. This book conveys the true story of one family during war time. Gently told through the voice of the teddy bear it provides some insight into life during war time for a group of young readers.

In 2002 Lawrence Rogers grand-daughter, Roberta Rogers Innes, found Teddy along with letters and other war memorabilia inside a large family briefcase. As she delved deeper she discovered the story of Teddy and her daughter, Stephanie Innes, along with Harry Endrulat decided to share it with others in the form of a picture book. Brian Deines beautiful illustrations poignantly bring the story to life along with the historical photographs, posters and other memorabilia which are interspersed throughout the book.

…Today Teddy resides in a glass display case at the Canadian War Museum in Ottawa. A portion of the royalties earned from the sale of this reissue will be donated to the Royal Canadian Legion’s Dominion Command Poppy Trust Fund, which supports the benevolent care of veterans and promotes remembrance.

This book is highly recommend for school and public libraries and should be a great choice to share with young readers on November 11.”
—Victoria Pennell

“This reissue of a book originally published by Key Porter Books is a story with difficult themes but it’s well told and a great way to explain the impact of war to kids. Told from the point of a view of a teddy bear (bear with me—it’s not so bad), it tells the story of a little girl from a farm in Quebec whose father goes off to fight in the First World War and doesn’t make it home. Her teddy bear is found on his body on the battlefield. The book, written by the soldier’s great-granddaughter, is based on a true story—the actual teddy is in the Canadian War Museum, which might be an excellent excuse to take your kids to the museum if you’re in Ottawa.”

“This touching book based on the true story of the Rogers family and a tiny teddy bear brought tears to my eyes and made my son sad for a family who lost a beloved member. Aileen Rogers, a 10 year old girl who lived on a farm in East Farnham, Quebec in 1915, owned a small stuffed bear named Teddy. When her father, Lawrence, enlisted to go fight in the war in Europe, and his letters reveal that he was cold and tired and missed them terribly while in the trenches, she decided to send him her teddy bear to remind him of home and to keep him safe.

The story is told from the point of view of the teddy bear, and I thought this was well done as a way to gently introduce the concept of war to the child reading it…

…This is a beautiful story and a beautifully illustrated book, with heartwarming moments of family time and love.”
—Laura Fabiani

Through the Looking Glass

“Inspired by the true story of a teddy bear “that was sent to the front lines during World War I” this remarkable book will give children a sense of what it was like living on the home front. They will also find out what it was like to witness a war from the inside of a war medic’s pocket. Aileen’s father’s great-granddaughter, Stephanie Innes, wrote this story with author Harry Endulat, and it serves as a tribute to the young men who left their homes and families to serve in WWI. It also shows to great effect that people left at home had to have courage too. It was not easy living with worry and fear.”
–Marya Jansen-Gruber

“Based on the true story, A Bear in War is told through Teddy, a stuffed bear who belonged to Aileen, a young girl who lived with her parents and brother in Quebec during the First World War. Teddy goes everywhere with Aileen, who we discover had polio and wears a brace on her leg, and can’t run and jump like other children…

A Bear in War is written by Lt. Rogers’ great-granddaughter Stephanie Innes as well as Harry Endrulat and was illustrated by Brian Deines. It is from Pajama Press ($16.95).

A Bear in War is such a beautiful story, and sad at the same time. We learn through Teddy what life was like during the war both at home and abroad. The illustrations are beautiful and I like the added real photographs and information provided about the family and Teddy.”