Daddy misses that great old chatterbox more than he can tell and when I get home you can talk all you want and I guess I won’t feel like telling you to stop.

Aileen told me you had some furry little ducks. Take care of them. 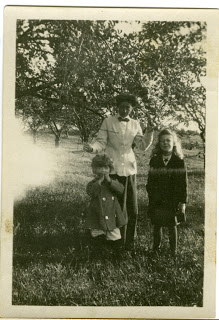 Howard, May and Aileen

Just now as I am writing this letter to you a flying machine is going over our camp. It is so close that we can almost see the man in it and it makes a noise just like a great big bee and goes very fast. Be a good boy and take Daddy’s place with mother and see that nothing happens to her. Just keep her safe for Daddy when he comes home.

I am sending a Three Penny to you. It is the kind of money we use over here and it is worth six cents in our money.

Good bye Sonny Jim. Lots of love and kisses for everybody from
Daddy