Posted on November 9th, 2012 by pajamapress 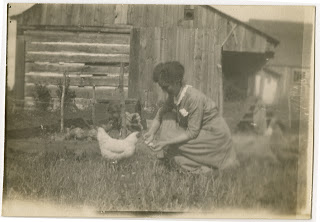 May feeding the chickens at the farm

Think of it. I have sent you Christmas boxes already. What they said is we must do so early to ensure delivery. There will be such a lot. I had to pack in two boxes I marked them 1 & 2.

There are a couple of little gifts for Dan, they are marked from children and from me. Aileen made a sweater herself…excuse some uneven places. There is a lot of love and devotion knit into it. Howard saved up his money and that is hard, and bought your present himself and we did enjoy purchasing it.

I have been pretty sick for a week. Was not able to go out. Had to get what I could on Victoria Avenue. Have not been out for a week. Terrible pain in back across shoulders.

I guess it must be my age is breaking me up. Oh Laurie, I am so afraid it may make an invalid of me as it does of lots of women and the children need me. Pray for me to be spared that.

Children are working hard at school… Poor Aileen struggles along. I did not send her to dancing. Cost too much and she did not seem to want to go much.   So I want to give her music and can’t do everything. I have all the money I need. Don’t send me any. You may need it.

If only I could see you again I think it would make a different woman of me. Loneliness is eating my heart out and yours probably too.

I must go and get dinner for kiddies, love from us all and hoping for your leave.

I am always yours,