Posted on November 6th, 2012 by pajamapress 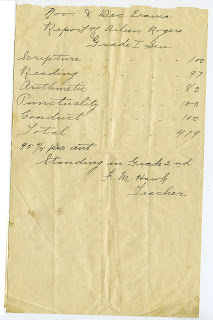 I received a letter from mother today enclosing a copy of your Easter report. It was fine and Dad was so proud of it. He showed it to all the boys and Dan came in and of course I  had to show it to him, he was almost as pleased as I was.

I received the Easter parcel yesterday so was able to give Dan his bunny card also the bunch of grapes, which he and I are eating now. He had never seen anything like them before so was very pleased with them.

I would liked to have had Howard’s report too. It must have been fine and I am very much stuck up about you both.

The weather is sure lovely just now and the sun is fine and warm and as you know I like warm weather. It looks good to me.

I want to enclose a letter to Howard and so will finish this one.

Lots of love for you all from