Posted on November 12th, 2012 by pajamapress

Lieutenant Lawrence Browning Rogers, aged 37, travelled to the front lines of World War One as a medic in the Fifth Canadian Mounted Rifles in 1915. He left behind his wife, May, his ten-year-old daughter, Aileen, and his seven-year-old son, Howard. The family exchanged hundreds of letters, ten of which we have shared over the last two weeks. This letter came to May following Lawrence’s death during the battle of Passchendaele. 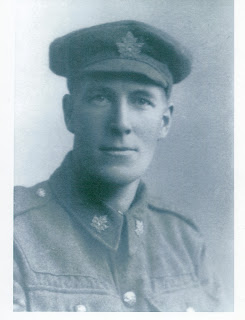 Words written or spoken would fail to express to you our sympathies with you in your sad bereavement.

Mr. Rogers was more than a comrade to both. Dan and myself and I can assure you we both feel the loss of such a comrade deeply.

We have at least one consolation. His sacrifice will not have been made in vain.

His medical work will be remembered by many who have been attended by him in the field and many a poor fellow has departed this world with little pain thanks to the untiring efforts of Mr. rogers.

Our Empire and our God I am sure cannot forget such deeds.

In your sorrow remember that our God knows best what is good for us, and I am sure it is God’s will that our comrade should be called to higher service.

Mr. Rogers died serving his God and Country, what better and nobler death could a man die.

In closing kindly permit Dan and myself to again offer you our sincerest sympathies.