Letters from WWI: Another Winter

Posted on November 8th, 2012 by pajamapress 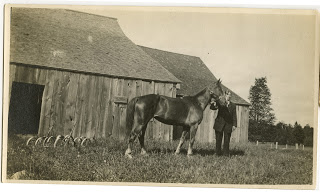 Lawrence and one of the horses, before the war

My how I dread the thought of putting in another winter in the trenches but I suppose it must be done for we have to win before we come back.

Russia may not be much use just now but she is coming along and the U.S. are doing fine, then Canada will buck up and there will be something doing. I would not be surprised if the actual fighting ceased this fall or early winter.

Wish I could just drop in for supper but suppose like a lot of things it will have to wait.

Tonight is almost a full moon over here but usually we do not appreciate moon-light nights. I don’t think you are getting very sentimental for I sure feel that way myself. I did not think you had gotten over it years ago but just perhaps fed up for a while and I sure don’t blame you for I was anything but good company at times.

Don’t worry dear about a cake although I like them, still it is an awful lot of work and I don’t want you to do it when you are not feeling well. I am glad that Aileen is able to ride her bicycle also Gray but she wants to be careful with him in case he should stumble and throw her.

However I am sure it will do her the world of good learning to ride and then Gray is such a quiet beast to learn on. Glad to hear that you are feeling better but do take care of yourself for my sake.

Dan is going to write to you about his money as soon as he can get time. I heard that Major Hewson was over in England again but could not find out when I was over there.

I am just as anxious as you to see all again and I am hoping and trying all I can to get at least a furlough to come home but cannot tell yet if I can get it.

Well dear there is nothing very much to write about so will close and go to bed.

Lots of love for you all