Letters from WWI: A Lot to be Thankful for 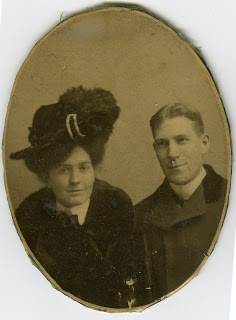 May and Lawrence’s wedding photo

I am so glad the children received the cards and liked them. It is so hard to find things to send them. I have sent you a photo registered and another little parcel also registered. Hope we will have better luck this time.

The holiday was not bad but it was not the nice bed that appealed to me, it was the nice, clean tablecloth and decent dishes and above all the difference in the people. You don’t know how much I miss seeing and talking to a real decent lady like Tom’s mother and aunt. That was far ahead of any soft bed. I am so used to sleeping on the hard wood that I don’t want a bed.

You say usually we were happy. If there was ever a minute when I have made you unhappy I don’t know how to express my sorrow for I know there were times when things were not going just as they ought to…I will try and make amends  when I get home again.

I wish you would not work so hard as I want to find my girlie when I get back not a shadow or a skeleton but at least looking like a living being. Glad you do go out and have company. It is the best thing for you.

You know I came over here to do my bit and it does not matter much to me how I do it, so long as I get the chance. Some of the fellows I am afraid have gotten cold feet and they are trying to back out as gracefully as possible.

Some of them admit that if they had not thought that the war would be over by now they would not have enlisted.

We have still a lot to be thankful for. I am still alive and well and as you have not said anything about anybody being sick I trust you are all the same as I am.

Will have to close now as we are terribly busy. Love to you all and do take a rest.