Posted on September 3rd, 2012 by pajamapress 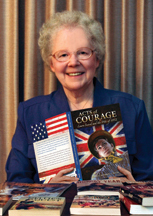 Connie Brummel Crook is a historian, a former teacher, and the author of fifteen works of historical fiction for young people. She shared some insights with us about writing in her genre, and especially writing her most recent novel, Acts of Courage: Laura Secord and the War of 1812.

Acts of Courage contains a lot of historical figures, and a lot of characters based on  real people, but Red—James FitzGibbon’s childhood persona—is your own invention. What led you to introduce this character?

As a novelist and former teacher of English, I saw the need for the entrance of a boy in the story to attract male as well as female students to read my book. When I investigated Laura’s younger years (about which little had been written) and I found out about her father’s part in subduing Shay’s rebellion, I could see the way to work a teenage boy into the story. Since FitzGibbon would play such an important part later in the story, I thought of bringing him into the story sooner. After all, I am writing a novel—not a biography—and must adhere to some characteristics of novels, which I taught my classes for many years.

A lot of texts about the War of 1812 gloss over the hardships and injustices faced by the Native peoples who were involved, but you clearly made a deliberate choice to highlight the Mohawks’ struggles for survival. Why was that so important to you?

When I first researched for this story, I became fascinated by the writings of Joseph Brant. In fact, in the first book I wrote about Laura he became so prominent that, when I sent it to the editor, she told me that I could not change main characters in the middle of the book. As a novelist I knew that, but I had become captivated by Joseph Brant. He wrote not only about the injustices faced by his people, but also about the white man’s lack of justice to their own. For example, when the British poor could not pay their debts, they were put in debtors’ prisons. Whole jails were filled with these prisoners. Joseph Brant pointed out in the most eloquent language that among his people, destitute widows and others in need were taken in and helped by the rest of the tribe. He said that his people were known as savages and yet the white men who did such things to their own in need thought themselves to be civilized.  Who were the real savages, he asked.

Also, as a descendent of Loyalists, I recognize the great help of the native peoples who were on the side of the British in the American Revolutionary War. They had great farms across the northern part of the present state of New York, and they were burned out by the American rebels when they took the part of the British in the war. After the war, the British should have given them the same as the white Loyalists, for they gave up just as much. Joseph Brant and his sister Molly Brant, wife of Sir William Johnston, were great leaders of their people who influenced them to side with the British.

What is your favourite part about writing historical fiction? What is the hardest part?

One hard part is pulling myself away from the research to start writing. But that is a favourite part, too, because the research gives me more details about real people, who lived real and productive lives.

Another challenge is that one is confined to the main facts. I have been praised for historical authenticity, but that has come to have its limitations too. Reviewers forget that I’m a novelist and when I introduce a scrap of fiction to embellish a story, they can be critical about my addition. That is a hard part especially since all my main facts are accurate. If I do change anything, I account for it in my Historical Note at the end of each novel.

Sometimes, I wonder if it is a good idea to change anything, for the historian named Coffin introduced the part about Laura leading a cow through a wood to pass the sentries, and readers believed that for years, even though it was denied by all of Laura’s descendants. Still, I will continue as I have. It’s suited to me because I don’t have a wild imagination like many writers do—but I do have a purpose. I hope that my books may bring to life more Canadian heroes for students to admire. Americans praise their heroes and so should we Canadians. There are many who are so worthy.

In your research, have you ever come across a story or person you would like to write about, but haven’t had the chance?

Yes, all the time. I would have liked to write about Joseph Brant and also his sister Molly Brant, who married the Englishman Sir William Johnston of Fort Johnston of Amsterdam, New York. She exercized great influence with the Six Nations and her brother Joseph and helped greatly to keep them with the British during the American Revolutionary War. Mohawk women had a much greater influence over their tribe’s plans and voted in their meetings. Also, I was so impressed by Joseph Brant’s own writings.

Tommy Douglas is another about whom I’d like to write, or Edgerton Ryerson, who started public education in Ontario. After my Nellie McClung trilogy’s success, I’d like to write about others of the Famous Five who had women declared persons in Canadian law in 1929.