Helen Kubiw reviews Next Round on CanLit for LittleCanadians, “a story like no other” 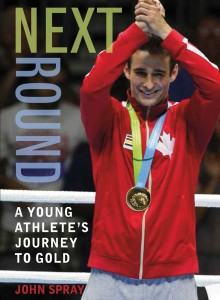 The 2016 Olympics are on in Rio and the media will be trumpeting the success stories of many an athlete, but Chechen-born Canadian boxer Arthur Biyarslanov has a story like no other.  And it’s a story that John Spray, benefactor of the TD Children’s John Spray Mystery Award, tells with inspiration and appreciation in Next Round: A Young Athlete’s Journey to Gold.

Arthur Biyarslanov’s story begins as a three-year-old escaping with his mother, Alla, twelve- and eleven-year-old sisters Bariyat and Bella, and nine-year-old brother Rustam from their war-stricken village of Gudermes in Chechnya to meet up with his father, Hairuddin, in Azerbaijan.  Facing soldiers with rifles and tanks and grenade-launchers of the Russian forces attempting to seize the Chechen republic was hardly an idyllic childhood for Arthur, affectionately called Borz, Chechen for wolf.  Their harrowing escape reunites the family in the windy city of Baku, Azerbaijan where he and his brother play with a makeshift soccer ball of socks and electrical tape to escape the austere conditions of their apartment and new life amongst strangers.  Soccer becomes Arthur’s salvation, helping him to learn the Azerbaijani language and fit in.

After the death of his father, the family deals with their new poverty by moving to even small quarters in a tough neighbourhood where Arthur, the new kid and target of bullies, becomes known as a fearless fighter but competitive athlete.  Though soccer is his sport of choice, Arthur often spars with his brother and sister Bella who were both karate champions, becoming a proficient wrestler, albeit a clumsy one.  And then his mother decides a fresh start is needed for the family and Canada would be it.

In Toronto, Arthur continues with his soccer, making new friends, learning English and becoming even more athletic,  including running and basketball in his many activities, though soccer is still his first love.  But a broken leg at the beginning of Grade 7 and subsequent slow recovery has Arthur concentrating on sports that demand more from his upper-body strength, leading him to boxing.  Though he knows he has lots to learn–he gets beat up regularly at sparring sessions–his brother Rustam knew “the Chechen Wolf would be a champion boxer.” (pg. 74)

The rest of Arthur’s story, peppered with numerous photographs, documents the young man’s rise in the boxing ring under the coaching of former Olympian John Kalbhenn and working with trainer Danny Santagato, whom Arthur affectionately calls Uncle Danny. From his first bout in 2008 to a rivalry with Zsolt Daranyi Jr. and having to choose between soccer and boxing, Arthur makes boxing his vocation, training tirelessly, and focusing on getting gold at the 2015 Pan Am games.

John Spray’s intent in writing Next Round is heartfelt and clearly evident from his dedication:

For all those children who escaped the horrors of war to find peace and new beginnings…and for Arthur, who replaced the sound of gunfire with the smack of leather on a punching bag.

The purpose of the book is clear but it’s John Spray’s writing that will capture Arthur Biyarslanov’s story better than any colour commentator could ever hope to relay as the boxer reaches for gold at this year’s Olympics.  John Spray, who owns a private investigations agency and is great lover of mysteries, tells Biyarslanov’s story as the harrowing action story that it is.  From witnessing at age three the massacre by Russian soldiers of  Chechens desperately attempting to flee for Azerbaijan, to the family’s escape across the cold water of the Yujniy Gerzel River into Dagestan and Arthur’s regular conflicts with the frightening old Azerbaijani woman whose fruit tree he climbs and his contentious boxing relationship with Zsolt, Next Round: A Young Athlete’s Journey to Gold is a  gripping story whose next chapter is still untold.

But no matter what the next round in his sport may bring, Arthur’s hard work and tireless dedication to boxing will give any opponent he faces a scare when looking into the hungry eyes of the Chechen Wolf. (pg. 100)