Archive for the ‘Timo’s Garden’ Category

Posted on September 13th, 2017 by pajamapress 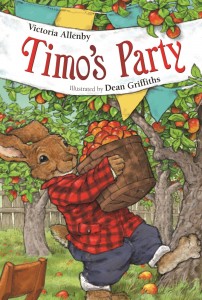 “Timo’s Garden and Timo’s Party are wonderful options for young readers who are transitioning into chapter books. Each chapter is accompanied by colorful and detailed illustrations helping readers follow character and plot. Both of these titles provide just the right amount of excitement and suspense to keep readers engaged. Timo and his friends are sure to become favorites!”

Posted on December 5th, 2016 by pajamapress

“Timo the cottontail rabbit has signed himself up for the upcoming garden tour. He creates a list for what he would like to keep, discard and add to his garden however tension begins to mount as he worries that one week might not be enough time to make his ‘good’ garden look great. By mid-week Timo is getting tired of telling himself how much he loves gardening as the realization sets in that all his hard work may not be enough. Furthermore, each day he turns down spending time with his friends to work on his garden project. Just when things are starting to come together, it rains all day on Friday. By Saturday, Timo’s garden is a soggy mess and with only one day to go until the garden tour, it takes a surprise visit from all of Timo’s friends to get his garden in perfect shape and for Timo to realize the true meaning of friendship. Timo’s Garden is a fun, whimsical beginner chapter book. The beautifully detailed illustrations help to tell the story and the addition of a flower glossary helps readers locate the variety of flowers in Timo’s garden.”

Posted on November 29th, 2016 by pajamapress

Toadstool Corners is hosting the Toadstool Corners’ Great, Green Garden Tour in a week. Several of the animals in the community have signed up for it already. Rae the badger thinks that Timo’s garden should be on the tour too. Though Timo does not think his garden is “Great,” he does have a week to make it better than it is now, and so Timo adds his name and address to the list of participating gardens.

The next day, on Monday, Timo gets to work weeding, watering, hoeing, and hauling. The garden starts to look nicer, but it is still “not quite great.” Then Hedgewick pays a call. He asks Timo for some parsley, which the rabbit is happy to give his friend, and then he invites Timo to come over for lunch. Hedgewick is making spinach cakes, which are always really delicious. Timo is tempted, but he declines the invitation. He has far too much to do to get ready for the garden tour.

With every day that follows, Timo gets more and more concerned that his garden isn’t going to be good enough for the tour and he works harder and harder to get it “ready.” He also declines one invitation after another, choosing to spend all his time working, and none of his time with his friends. He starts to feel tired and decidedly unenthusiastic about gardening. What used to be a joy is now a trial. Then something unthinkable happens and all of Timo’s plans and hopes are ruined.

Children are going to enjoy reading about Timo’s garden adventures, and misadventures, in this charming chapter book. They will see how a fun activity can become a chore when you take it too far, and how that activity can take over your life if you are not careful.

We are thrilled to announce that six recent Pajama Press titles have been selected and featured in the Spring 2016 edition of Best Books for Kids & Teens:

Elephant Journey: The True Story of Three Zoo Elephants and their Rescue from Captivity
978-1-927485-77-4  Hardcover with dust jacket
Written by Rob Laidlaw
Illustrated by Brian Deines

A Year of Borrowed Men
978-1-927485-83-5  Hardcover with dust jacket.
Written by Michelle BarkerIllustrated by Renné Benoit

“An ideal addition to school and community library collections, and complete with an illustrated glossary of flowers, this beautifully-designed early reader is very highly recommended for children ages 5 to 8, and in grades 1-3.” —Midwest Book Review

“…In reading the book aloud, the wordcraft of the author becomes more pronounced; Allenby’s use of consistent alliteration and internal rhyme throughout Timo’s Garden adds to the enjoyment of reading it.…

Also noteworthy is that Timo, in his reflection on his garden, lists and describes many different types of plants and flowers. This detail could lead to informative discussions with children about different types of flora. Additionally, Timo’s friends are all familiar creatures (a hedgehog, a squirrel, a frog, for example), and each is personified with different personality traits and interests.

I like that the message of putting in effort towards a task, but not becoming overly focussed on that task such that other aspects of your life suffer, is one that can be applied to various situations (school work, sports or arts activities, etc.). The idea of having ‘balance’ in life is subtly shown…”

Posted on December 21st, 2015 by pajamapress

“In this beautifully illustrated beginning chapter book, Victoria Allenby has introduced a lovely menagerie of animal friends, a timeless theme of the trials of friendships, and a whimsical and heartfelt text.

When Timo hears about the upcoming Toadstool Corners’ Great, Green Garden Tour, he is both excited to enter the fun contest, and concerned about the timeline. He has but one week to turn his garden from merely nice to great. Timo commits so wholeheartedly to the project that he begins to neglect his many friends, even missing his weekly tennis game with his pal Suki. In spite of this, however, when disaster strikes Timo’s nearly finished garden, his friends all pitch in to help save the day. Timo learns a valuable lesson, without the inclusion of tired moralizing, and makes sure to show all of his friends how wonderful he thinks they are.

The format of the book does an excellent job of holding interest. It incorporates lists on illustrated notebook pages, colourful half-page drawings on most pages—often across spreads—and an illustrated glossary of flowers at the end.

The text is simple enough for beginning readers for the most part, but does incorporate just the right amount of more challenging words to hone sounding-out skills. In addition, the use of some consistent rhyming text, alliteration, and onomatopoeia, adds whimsy and a lyrical tone to the story, a rarity among chapter books.

Posted on November 12th, 2015 by pajamapress

“Allenby (Nat the Cat Can Sleep Like That) and Griffiths (Bad Pirate) explore the perils of perfectionism, following a rabbit named Timo through a week’s worth of gardening, as he tries to make it perfect for an upcoming garden tour. Allenby laces her story with alliteration and wordplay (“Gently, he planted some ginger. Gingerly, he planted some gentians”), and Griffiths’s color illustrations further add to the cozy atmosphere—there’s a whiff of The Wind in the Willows in the dapper outfits he gives the animal characters. It’s impossible to miss the message (“I could have tended my friends instead of my garden,” Timo realizes, after a rainstorm ruins a week’s worth of work), but the easy camaraderie and old-fashioned gentility among these friends exert plenty of charm.”

Timo the rabbit is eager to make his garden “great.” Timo loves his garden, with its many flowers (an illustrated index names all those mentioned in the text) and “herbs for cooking, a lawn for visiting, and a bench for sitting and daydreaming.” Suddenly, though, it doesn’t seem special enough when he decides to participate in the upcoming garden tour. From one short chapter to the next, instead of spending time with friends, he frets and gardens, gardens and frets. Ultimately, Timo not only misses out on fun with friends, he’s also thwarted by poor weather when a rainstorm leaves the garden “a mess.” His friends rally to him help clean things up, but…the garden tour is cancelled due to yet more (offstage) rain, and so Timo and his friends instead have a picnic and make plans for more gardening. A closing image of garden-tour judges at Timo’s gate suggests that all’s well in the end. Throughout, Griffiths’ richly colored illustrations depict anthropomorphic animals in a pastoral setting and include Timo’s lists of tasks on pages made to look like notebook paper. While the text isn’t controlled enough for brand new readers to decode, the brief chapters make the story accessible on a structural level. A fine title for growing readers. (Early reader. 7-9)