Archive for the ‘Good Pirate’ Category

“At some stage in their lives daughters can become in­dependent, uppity and seemingly too savvy for their own good. But if this willful daughter is an appealing Springer Spaniel named Augusta aboard a pirate ship full of other dogs with her father as captain, things will happen that will ‘shiver your timbers.’…

Meet the foul-mouthed Captain Barnacle Garrick, his irresistible daughter, and a motley crew of sea dogs as they capture loot or survive a storm at sea. Depending on the circumstances Capt. Barnacle demands that the crew, includ­ing his daughter, be Rotten, Sneaky and Brainy in the Good Pirate book and Saucy, Bold and Selfish in The Bad Pirate book. How these commands are obeyed is illustrated in some of the most captivating seafaring dog drawings and captain-fearing adventures. You will be intrigued by the bombastic captain with his menacing hook, his free-spirited daughter who loves vanilla as a perfume, and the life of the pirate dogs….”

“Good Pirate receives fun drawings by Dean Griffiths, who brings to life the story of a dog pirate who just is too good to be inconsiderate….A fun survey, this doggy pirate show is a fun pick with its oversized, colorful drawings and cartoon-like ‘balloon’ conversations between very different pirates.”

Posted on February 13th, 2017 by pajamapress

“What did you like about the book? Written in the jargon and accent of a true pirate, this book is a great read aloud book that will keep young children entertained. The illustrations are large and colorful so children hearing this book at a story hour in a library will be able to see the pictures with no problem. This is a story of a pack of dog pirates who are off to plunder and pillage. One of the crew, the captain’s daughter is an unlikely pillager as she is more concerned with more frilly things. When she saves the day by rescuing the rest of the dogs from the mangy pirate cats, she shows how clever a frilly pirate can be….

To Whom Would You Recommend this book? This is recommended for ages 5-8. Children who love pirates and have read the “Bad Pirate” book will love this book.

Who should buy this book? This would be good for elementary school libraries and public libraries that have a children’s section….

Should we (librarians/readers) put this on the top of our “to read” piles?  yes”
—Sandra Pacheco, ESL teacher, Washington, D.C.

Captain Barnacle Garrick and his daughter Augusta, last seen in Bad Pirate, return with more adventures. Augusta wants to be a fancy pup, but she’s the daughter of a pirate captain, so she needs to be rotten, sneaky, and brainy. Despite her best efforts to be good and foul, she can’t help but groom herself, enjoy wearing pearls, and love the smell of vanilla. When Captain Barnacle Garrick and the other pirate pups run into trouble, it’s Augusta and her fancy vanilla smell, lovely pearls, and brain that save the day. Fans of the first title will be pleased with this continuation of Augusta’s story. While chock-full of pirate slang and appeal, this tale is a great example of being true to oneself despite what others might say, and should be recommended as such. VERDICT A first purchase for pirate picture book collections and a wise choice for most libraries.

Kirkus calls Good Pirate “So much fun, readers will howl for more.”

A plunderin’, pillagin’ pup takes down some pretty paw-some pirates. Having already proved herself to be saucy, bold, and selfless in her previous adventure (Bad Pirate, 2015), sea pup Augusta Garrick now faces an even bigger challenge. Her father, Capt. Barnacle Garrick, has discovered his booty has been plundered by a pack of mangy sea cats. To recover the treasure undetected, the captain advises everyone to be “rotten,” “sneaky,” and “brainy.” Trouble is, Augusta has a penchant for “fancies,” and her accessorizing does not sit well with her pa. A little dab of vanilla proves her undoing, and she’s thrown in the brig to avoid botching a raid with her scent. Fortunately, brains, sneakiness, and the rotten smell of fanciness save her crewmates from those tricky kitties…once again it’s a jolly relief to see a female pirate with so much oomph and initiative. As ever, Griffiths’ art proves inventive, whether he’s rendering a seagoing whippet or a beard on the feline Capt. Fishmonger that Blackbeard himself would envy…these dogs have so much fun readers will still howl for more.

This Sunday is Father’s Day, a day to appreciate and spend time with our fathers. In our opinion, there’s no better way to do that than by sharing some quiet time with a story. This Father’s Day, we’re celebrating one of the most challenging and rewarding parent-child relationships: the love between father and daughter. We’ve got some some great recommendations for the dads and daughters in your lives, and they make great gifts because the fun and quality time are built right in.

Going For a Sea Bath

Is there a more contentious time between parents and kids than bath time? Leanne thinks not. Bath time is boring. It’s annoying. It’s a pain. Luckily her father might have just the right idea to make Leanne’s bath time fun, exciting and amusing. He runs down to the sea and brings back one turtle. Then two eels. Then three clown fish. But can one good idea go too far when it leads to ten octopi? This silly, lighthearted adventure highlights the the goofy, good-hearted fun of a father-daughter relationship and will surely inspire dozens of giggles!

Moving from the tub into the open sea, meet Augusta and Barnacle Garrick, a daring father-daughter pirate duo. Captain Barnacle  has firm opinions about what makes a great pirate: members of his crew must be saucy, selfish, brainy and rotten. But good-natured Augusta has ideas of her own. Will her own resourceful acts of daring prove to her father and all his mateys that she can be selfless, fancy and a great pirate?

Although father-daughter relationships aren’t always easy, Augusta and Barnacle demonstrate  that parents and children can disagree sometimes, but still love and appreciate each other in the end. Even if they’re scurvy rotten seadogs.

We recommend a father-daughter visit to your nearest indie bookstore to check out these, or any of our other, titles.

Last Sunday Pirate Life Toronto on Centre Island hosted a launch event for Good Pirate. Kari-Lynn Winters and all her mateys crowded onto a real-life pirate ship to partake in activities, tattoos, Kari-Lynn’s readings of both Pirate books, and a performance by the scurviest pirates on the island. Even passing landlubbers enjoyed themselves, and no one had to walk the plank or get wet! 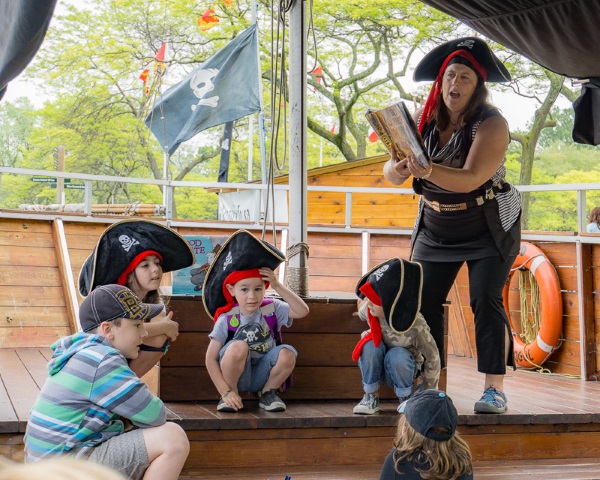 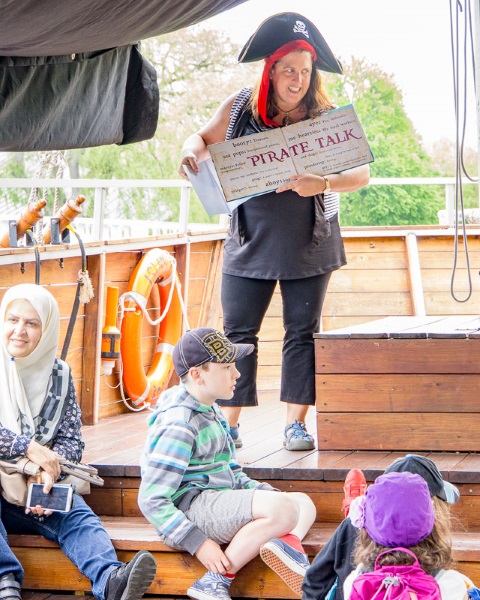 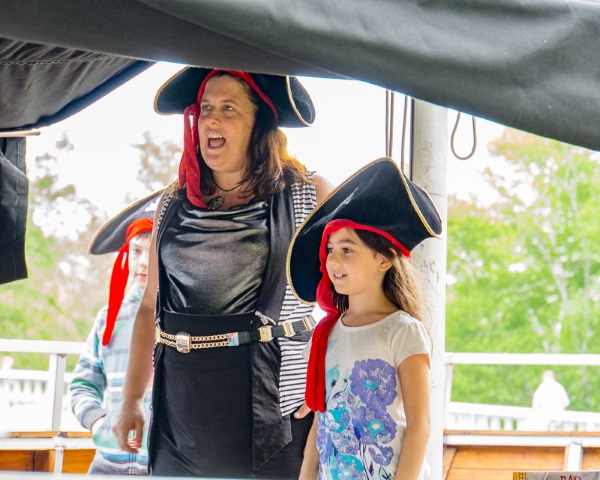 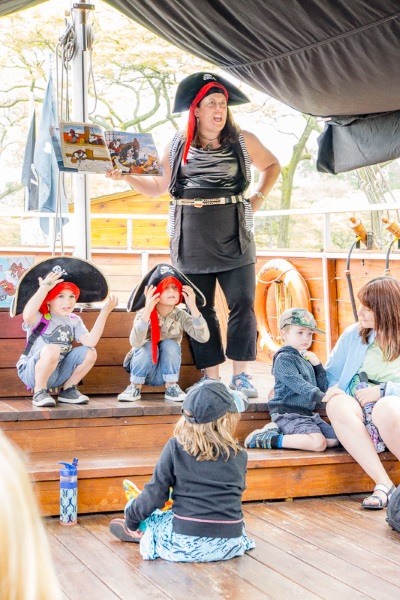 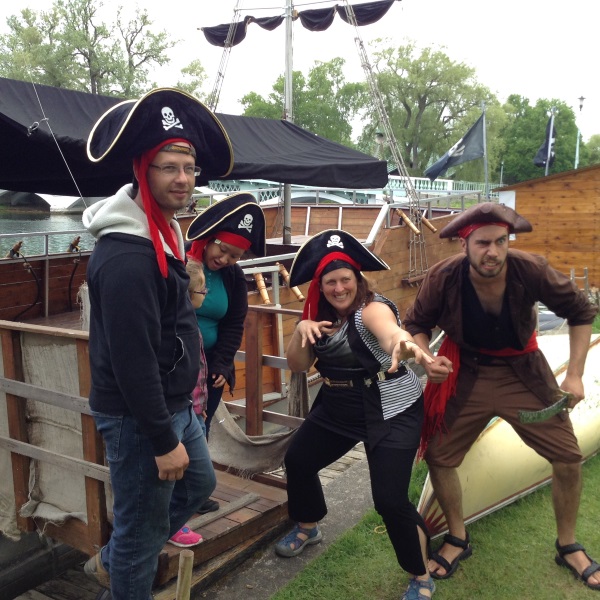 —
Order your own copies of Good Pirate and Bad Pirate today!

CM Magazine recommends Good Pirate: “A must for reading aloud!”

“In order to please her father and try to fit in, Augusta attempts to abandon her love of beautiful things and tries to be “foul and useful”. But the scent of vanilla derails her plans, and she, too, ends up in the brig instead of “pillagin’ with the rest of the crew. When her father and his sea pups are captured by a bunch of pirate cats, sweet smelling Augusta devises a plan that saves the day and proves that ingenuity can come from a fancy, yet brainy, dog.

Winters once again makes use of delightful dialogue peppered with tons of pirate and nautical terms, many of which can be found and explained on the cleverly designed end papers. The story is skillfully written and inventive and is a must for reading aloud! The dynamic and expressive illustrations are a perfect match for the energetic and rhythmic language. Griffiths’ use of rich colors and detail elevates the story and makes this doggie crew so engaging.

Reesa Cohen is a retired Instructor of Children’s Literature and Information Literacy at the Faculty of Education, University of Manitoba in Winnipeg, MB.

“The text is saucy and spicy and flavoured with pirate-speak, as befits a hearty swashbuckling yarn, but it’s all in good fun and brimming with joviality.  Still amidst all that merriment, so much like Kari-Lynn Winters herself, is an important message about being true to oneself and appreciating differences as strengths.  And, again, Dean Griffiths illustrates with richly detailed pirate ship sets and characters which are dogs and cats of all variety.  Kids will delight in identifying the different breeds and who’s wearing what and trying out the “pirate talk” and “nautical talk” which peppers the story and is defined in the endpapers.  Arr, Good Pirate is a good time with a hearty–both deep and enthusiastic–message packaged in the fanciest scurvyiest of art.”—Helen Kubiw