Archive for the ‘Arthur Biyarslanov’ Category

Arthur Biyarslanov discusses his Next Round

Arthur Biyarslanov came to Canada as a child after fleeing the second Chechen war with his family, now at the age of twenty-one, the “Chechen Wolf” is a champion amateur boxer who won gold for Canada in the Pan Am Games. It’s a busy time for Arthur; he is currently training for the 2016 Summer Olympics, and is looking forward to the release of his upcoming biography, Next Round: A Young Athlete’s Journey to Gold by John Spray. He dropped by the office earlier, and I sat down with him to chat about the many exciting things he’s got on the go. 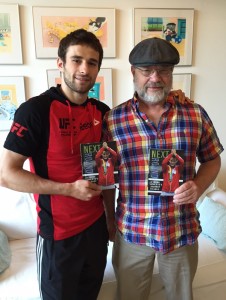 Arthur and John holding copies of the freshly printed Next Round at the Pajama Press offices.

S. You’re going to be representing Canada in the 2016 Summer Olympics. What are you most looking forward to about that?

A. I’m very excited because it’s my goal, and I always wanted to get to the Olympics. What I also want to do now is win another medal for Canada because it’s been so long. I always go for winning gold. I don’t like silver or bronze, so I’m going to try everything I can to get another gold medal and hear the national anthem for Canada. It’s my way of giving back. That’s what I want to do.

S. How long has it been since we’ve won in boxing?

A. The last person to win a gold medal was Lennox Lewis (Sugar Ray Leonard) in 1988.

S. Oh wow, that was before we were born.

A. It’s been many years. It’ll be nice to hear the national anthem again.

S. Will it be your first time visiting Brazil?

S. What sort of training are you doing to prepare for the Olympics?

A. I’m training every day. I don’t work or anything; my job is just training. I train two or three times a day. I have two different coaches, a strength conditioning coach and a boxing coach. I work with them every day, six days a week and Sundays are my day off.

S. When you say you’re training two to three times a day, how many hours at a time are we talking about?

A. It depends what type of training, whether I’m going light or hard. It’s usually around 1 to 2 hours each session.

S. And that’s manageable, or is it very difficult?

A. I always have to take naps in between to re-energize for my next bout of training. I don’t really get much time to do anything. I just train, sleep, train, sleep.

S. If I decided I wanted to start boxing, what’s your best tip for me?

A. The hard part is staying in boxing. When I first started I didn’t want to box, I wanted to do other things. So I would say, be dedicated to what you do because when you start off, you’re obviously not going to be good. It’s going to take time to get better. You’re going to get frustrated, you’re going to hate it, but you’ll only get better and better each time you go. So just stay in the gym.

S. What inspires you to stay with it?

A. It’s how far I came, from nothing to something. I never thought I’d be a boxer. I always loved soccer. I started boxing, and I was very bad. I didn’t know how to box at all. Now I’m winning nationals, I’m winning international tournaments. I get a great feeling after every win. I get to travel to different countries and it’s very nice. It keeps me going.

S. Let’s talk about your book for a little bit. What was your favourite part of having a biography written about you?

A. It’s awesome. People always ask me about my background. I don’t like thinking about the past, so I make my answers very short. But this book shows every detail of my story, and that’s what I like most about it. It tells you about my childhood, how I grew up and how I switched from one sport to another. All the main points are in it.

S. You were a soccer player before you did boxing. What made you make the switch?

A. My brother forced me to (laughs). I didn’t want to be a boxer, but I was forced into it and then I kept winning.

S. John Spray is the writer you collaborated with to produce Next Round. What was fun about working with him?

A. We went to a baseball game a few months back, and it was really nice. We got front-row seats and it was a great time. John’s a really good guy and I’m glad I met him.

S. John was an amateur boxer himself, for a while.

A. He told me a bunch of stories about when he used to fight. It was great knowing someone who has been in the same position as me as a boxer, and who understood what it was like to be in the ring.

S. He was definitely a good choice to write Next Round. What do you hope people will like most about the book?

A. The pictures. There are a lot of pictures from when I was young. It’s crazy how young I look, from being an innocent looking kid to becoming a boxer. I didn’t look like a boxer then, I had long hair and I looked like a cute little kid. I love that it shows the transition.

S. I’ve seen pictures of you just after fights too, and those are also great photos.

A. Yeah, those pictures are awesome.

S. So, you did come to Canada as a refugee. What would you tell other young refugees who might be coming into the country now?

A. Take advantage of it, because you get offered a lot of opportunities here like sports, education, freedoms. Life, I’d say, is a lot better here than in most of the countries in the world, so enjoy it to the max and take all the opportunities you can get!

Next Round: A Young Athlete’s Journey to Gold by John Spray is the juvenile biography chronicling Arthur’s journey to the 2016 Summer Olympics in Rio de Janeiro, Brazil. It will be available on June 15th, and officially published 15th, just in time for the Olympics. Order your copy today.