Home > Books > Under the Umbrella

The weather has never been worse; the man with the stormy heart is soaked and he’s going to be late! His mood is as black as the sky. Outside a nearby patisserie, a little boy stands under the shelter of its awning, gazing at the beautiful treats on display. When the wind snatches the man’s umbrella and drops it at the child’s feet, can this hasty curmudgeon slow down long enough for an unlikely friendship to blossom?

Catherine Buquet’s touching debut in lyrical rhyme, accompanied by the award-winning Marion Arbona’s bold and stylish illustrations, celebrates intergenerational friendship and the magic of sharing. It also reminds children and adults alike that bright moments can be found on even the gloomiest of days.

Reviews:
★ “Pithy poetry pairs with artful illustrations in this Canadian import, translated from the French…Arbona’s fantastical illustrations play with perspective, shape, and pops of bright color that enliven scenes primarily composed of black, gray, and white. Buquet’s text is translated into well-crafted verse by Woods. Memorable and instructive without a hint of didacticism.”—Kirkus Reviews ★ Starred Review

★ “…Under the Umbrella is as sweet and lovingly constructed as the brightest treat in a bakery window.”—Quill & Quire ★ Starred Review**

“[T]he moody, stylish artwork is full of such expressive movement…Artistically inclined children will likely be charmed by this French import.”—Booklist

“The writing and illustrations in this book complement each other well and work together to highlight the special moment that the two characters share. One could say that they are in the calm of the storm before heading back out to continue their day. This story can be read with a group or shared with one child”—CM Magazine

“Under the Umbrella is a visually stunning picture book that will warm the hearts of all who read it.”—Resource Links

“Marion Arbona’s sophisticated pencil, ink and gouache illustrations ably contrast the wet and bustling streetscape with the bright, warm colours enveloping the boy and the patisserie, as if they were in a world of their own. By the story’s end, this vibrancy surrounds the man, showing young readers that something wonderful can happen when one least expects it, even on the most melancholy of days.”—Canadian Children’s BookNews

“Catherine Buquet’s touching debut in lyrical rhyme, accompanied by Marion Arbona’s bold and stylish illustrations, celebrates intergenerational friendship and the magic of sharing. It also reminds children and adults alike that bright moments can be found on even the gloomiest of days.”—49th Shelf

“Anyone who dislikes rainy days would enjoy Under the Umbrella…Arbona’s artwork, in gouache and pencil, is the real highlight of this rhyming story….her unique illustrations evoke the very feeling of a rain-soaked day.”—Winnipeg Free Press

“Artistic, unusual drawings of this sullen man perfectly capture his dark mood and the dark day, until a little boy changes his perspective in an unexpected way.”—Midwest Book Review

“Bold, fantastical illustrations that play with perspective, shape, and color accompany the rhyming text which is a delightful read-aloud.”—Omnilibros

“…very well written (with beautiful rhyming and rhythm to swoon over) and makes for a positively lovely read aloud.”—Book Nerd Mommy

“…I loved the message of this book, that what we bring to the world is more important than what the world brings to us….The contrast between the man’s mood and the boy’s shows brightest in the contrasting light and dark shades. And the way the light spreads into the dark demonstrates the message of the story far beyond the ability of the text to do so.”—Geo Librarian

“Under the Umbrella was first published in French as Sous le parapluie (Les 400 coups, 2016) and garnered much attention for its simple but restorative story told with the pencil and gouache illustrations of Marion Arbona…[A] great lesson in word choice for older readers and writers to witness the impact vocabulary has on atmosphere….The interaction between the balding older man in the pin-striped suit and the little boy in cap and short pants is fleeting but colossal in its momentary importance.”—CanLit for LittleCanadians

“The artwork beautifully matches the feel of the rainy day from two clearly different perspectives. Use of color, shape, and varying perspective add to the book’s appeal. The text is filled with an invitation to look at the world from point of view, and the translation to memorable rhyming text is a real plus!”—Sal’s Fiction Addiction

“A beautifully illustrated picture book that celebrates a few of my favourite things, namely light, umbrellas, and baked goods? Yes, please….As we turn towards the season in which the rain can seem unceasing and the world still a bit too cold and grim, it becomes important to be reminded not to hurry too much, and not to miss those moments in which light and communion is possible.”—Pickle Me This

“Striking illustration work emotes the changing moods of this story with tremendous pizzazz. A joy for ages 2 and up.”—Orange Marmalade 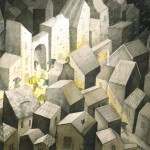 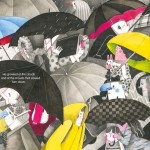 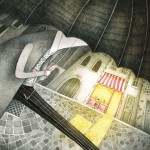 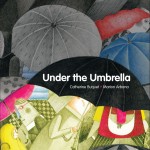 All the World a Poem

When the Rain Comes