Distributed in the US by Ingram Publisher Services

Between her father’s posting overseas and her best friend Sienna’s move to the other side of the country, seventh grade is looking lonely for Jane MacDonald. But Sienna has left her with one last trick: a hidden message in a library book—the perfect plot to start a secret club and find Jane a new book-loving friend.

Tyson Flamand has problems of his own. Since the fourth grade he’s had a reputation as a bad kid, and there’s no point fighting it when teachers always think the worst. So when he finds an anonymous note in the library looking for a nerdy new friend, he knows he’s the last person in the world it could be meant for. But something makes him answer it anyway, and Tyson finds himself pulled into a secret book club where being hidden may be the first step to being truly seen.

With the insight of a veteran middle-school teacher, Colleen Nelson, author of the award-winning Harvey Comes Home and Sadia, weaves together two stories of identity, expectation, and the courage to challenge both. As their paths move ever closer, Jane and Tyson both discover their own self-reliance and their ability to overcome obstacles that seemed insurmountable.

Reviews:
“Told in alternating chapters from the perspectives of seventh graders Jane and Tyson, this story unfolds with clever aplomb…[and] a robustly diverse supporting cast…A well-plotted, well-written story that will engage readers and encourage nonreaders.”—Kirkus Reviews

“Featuring the duo’s interspersed missives, the narrative explores what it means to be accurately perceived, by both others and oneself, while simultaneously serving as a satisfying love letter to Louis Sachar, Rebecca Stead, Jacqueline Woodson, and other cherished authors, and emphasizing books’ transformative power.”—Publishers Weekly

“Nelson, a Canadian author, offers an appealing dual narrative that switches, chapter by chapter, between the two very different classmates’ points of view. The writing is straightforward but lively… [A] rewarding middle-grade novel.”—Booklist

“In the diverse novel The Undercover Book List, two classmates overcome their initial antagonism to find commonalities, which lead them to unexpected solidarity.”—Foreword

“The Undercover Book List will resonate with children who feel unseen, who dream of a friend who understands them, or who are figuring out what kind of person to be. It’s an absorbing, entertaining, and sensitive story that champions reading and the love of books.”—Quill & Quire

“This is every mother’s dream situation! Confiscate your kid’s game box and have him turn to reading as a compensation? Wow!…Give The Undercover Book List to a reader and open up a whole new bunch of possible authors to be enjoyed or give it to a non-reader and see what happens. You might be surprised!”—CM Magazine

“Told in alternating chapters from each main character’s perspective, The Undercover Book List is a treat for book lovers as it recommends titles such as Harbor Me, The Book Thief, and several others. Both characters learn and grow a great deal over the course of the book and readers will really enjoy their development.”—Youth Services Book Review

“For the reluctant reader who doesn’t know they’re a reader yet and for those who will consume this story with gusto… The Undercover Book List brings reading out from under its nerd status into a mainstream social avocation it can be.”—CanLit for Little Canadians

“[A] story grounded in a school library and books, focused on friendship… A great story for book worms and kids who have to move and make new friends. Also perfect for the teacher to read aloud.”—The International Educator

“I really liked this book and it’s on my to-be-read-to-my-son pile. And while I liked Jane, the main character in the book, it was Tyson I liked the most… I loved how hard Tyson tried and how it changed him in the end.”—Book Time

“Both Jane and Tyson have challenges at home that ring true to middle-grade experiences and add depth to the character’s stories… I would recommend this story for Gr. 4-7.”—kathiemacisaac

“[F]abulous for the start of a new year to inspire readers and non readers to just pick up a book and enjoy.”—Storytime with Stephanie

“One of my favorite kind of books are books about books…and this one did not disappoint! By the end I wanted to join both an Undercover Book Club and a Kid Lit Quiz team.”—Julie, Goodreads

“The Undercover Book List celebrates being true to yourself and recognizes that everyone has a path to become a reader.”—Laurie Hnatiuk, Goodreads

“A heartwarming page turner that achieves what all exceptional literature does, it inspires the reader to read more. All the stars for this middle-grade gem.”—Michelle Kadarusman, Goodreads 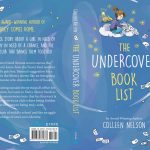 Girl of the Southern Sea

Harvey Holds His Own