In a read-aloud perfect for conversations about team stewardship and growth mindset, a boy overshadowed by a family of skilled hockey players finds an innovative way to shine.

In Jackson Moore’s small town, his family is known for producing hockey heroes—but he worries that he’ll never measure up to their amazing skills. On the ice he feels like a potato on skates, and his teammates begin to wonder if he really is a Moore. Then, when a shortage of equipment puts his team at risk of losing their spot in the Winterfest Tournament, Jackson makes a game plan of his own and realizes that his problem-solving and stewardship abilities are hallmarks of a true MVP.

Just like Jackson, award-winning author Kari-Lynn Winters grew up playing in the shadow of a big hockey family. In On the Line she demonstrates with heart and humour how scoring goals is not the only path to team heroism. An author’s note furthers the conversation about sportsmanship, teamwork, and building supportive communities. Lively art by award-winning illustrator Scot Ritchie perfectly captures the action on and off the ice as Jackson learns to celebrate the skills he has—and to enjoy the game in spite of the ones he doesn’t have. 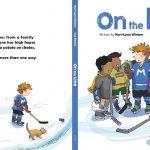 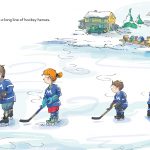 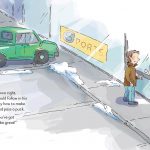 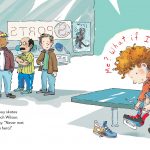 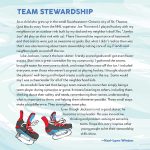