Who says a pirate can’t be sneaky, brainy, and FANCY?

In Bad Pirate, unlikely buccaneer Augusta Garrick that integrity pays off, even when it means running against the pack. In Good Pirate, the sea pup is still under pressure to fit in, this time by abandoning her love for fancy things. After all, says her father the captain, a good pirate must be rotten, sneaky, and brainy. But is there really any reason a fancy pirate can’t be just as ingenious as a rotten one?

When the rest of the crew is captured by Captain Fishmonger’s mangy pirate cats, Augusta gets the chance to show just what a well-dressed, sweet-smelling, clever pup can do. With swashbuckling energy and satisfying pirate dialogue, Kari-Lynn Winters has written a sequel worthy of Bad Pirate’s popular and critical success. Dean Griffiths brings personality to every crewmember, telling stories within stories through his richly detailed illustrations. A treasure for any landlubber who knows you can’t judge a mind by its cover.

Reviews:
“Winters once again makes use of delightful dialogue peppered with tons of pirate and nautical terms, many of which can be found and explained on the cleverly designed end papers. The story is skillfully written and inventive and is a must for reading aloud! The dynamic and expressive illustrations are a perfect match for the energetic and rhythmic language. Griffiths’ use of rich colors and detail elevates the story and makes this doggie crew so engaging.”—CM Magazine

“Winters’s pirate lingo sounds fun and even original, and Griffiths’s expressive dogs and cats in pirate garb are both realistically pet-like and evocative of squirmy children at play.”—The New York Times

“…once again it’s a jolly relief to see a female pirate with so much oomph and initiative. As ever, Griffiths’ art proves inventive, whether he’s rendering a seagoing whippet or a beard on the feline Capt. Fishmonger that Blackbeard himself would envy.”—Kirkus Reviews

“…chock-full of pirate slang and appeal, this tale is a great example of being true to oneself despite what others might say, and should be recommended as such. VERDICT A first purchase for pirate picture book collections and a wise choice for most libraries.”—School Library Journal

“The pirate terminology that appears all throughout the dialogue is defined on the end papers of the book…[T]he art work reminds me of Jan Brett.”—Resource Links

“The text is saucy and spicy and flavoured with pirate-speak, as befits a hearty swashbuckling yarn, but it’s all in good fun and brimming with joviality.  Still amidst all that merriment, so much like Kari-Lynn Winters herself, is an important message about being true to oneself and appreciating differences as strengths…Arr, Good Pirate is a good time with a hearty–both deep and enthusiastic–message packaged in the fanciest scurvyiest of art.”—CanLit for Little Canadians

“The front and back flyleaves of the book contain pirate and nautical talk to help young pirates understand such unfamiliar words as ‘plundering’ and ‘brig.’ Large, vibrant artwork provides plenty of swashbuckling action and perfectly mimics Caribbean pirates.”—Pirates & Pirateers

“Written in the jargon and accent of a true pirate, this book is a great read aloud book that will keep young children entertained. The illustrations are large and colorful so children hearing this book at a story hour in a library will be able to see the pictures with no problem.”—Youth Services Book Review

“Capt. Barnacle demands that the crew, includ­ing his daughter, be Rotten, Sneaky and Brainy in the Good Pirate book and Saucy, Bold and Selfish in The Bad Piratebook. How these commands are obeyed is illustrated in some of the most captivating seafaring dog drawings and captain-fearing adventures. You will be intrigued by the bombastic captain with his menacing hook, his free-spirited daughter who loves vanilla as a perfume, and the life of the pirate dogs.”—Vermont Country Sampler 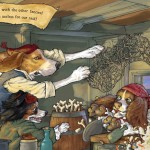 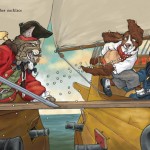 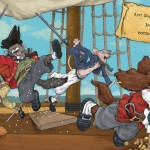 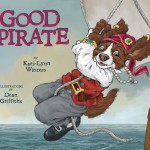